When people talk about evolution, they are referring to major changes above the species level, such as how dinosaurs and birds, humans and chimps, and whales and cows are related. This type of evolution is called macroevolution. Microevolution, on the other hand, looks at changes within a species, like why some peapods are yellow, why HIV develops drug resistance, or why some people don't like Brussels sprouts.

Macroevolution typically focuses on phenotypic, or observable changes, rather than genotypic, or DNA changes. It examines what phenotypes are similar (or homologous), and what phenotypes are different to determine species relationships. While the two are related, similar phenotypes do not necessarily mean you have the same genotype. Just because two organisms have wings, it doesn't mean that they're closely related genetically. For instance, bats are more similar to rodents than they are to birds, even though birds and bats share the trait of being able to poop on you from above. Cursed be the day that evolution created those flying poop-mongers.

The Long Road to the Beagle

A lot of people like to credit Charles Darwin for discovering evolution, but this is in fact not true. He stole it from his roommate who was calling it "Facebook." Actually, Zhuangzi, a Chinese Taoist philosopher in the 4th century BC argued that nature was in "constant transformation," meaning there is variation in nature. Augustine of Hippo and Thomas Aquinas, famed Christian theologians (and Catholic Saints), both proposed that forms of life transformed "slowly over time." Basically, organisms evolve.

Jean-Baptiste Lamarck famously developed the first concrete theory of evolution through adaptation. He proposed that evolution was driven by two forces:

The complexifying force idea stated that the origins of life is like a constant treadmill, and that simple organisms pop out of nowhere by spontaneous generation, then evolve to be more complex. New simple organisms (the "sacs of chemicals" from previous sections) are spontaneously born, then immediately evolve to become more complex organisms. We at Shmoop would like to believe that this theory accurately predicts such complex organisms as "Goat-boy" and the "Chupacabra."

The adaptive force argues that we adapt to our environment, and these adaptations can be passed on to our offspring. This implies that our experience can affect how successful our offspring is. According to this theory, if you do enough leg workouts, your children will be able to dunk a basketball, even if they just do toe exercises.

While Lamarck was wrong about this, let's give the man some credit. After all, he noticed that if you work your muscles a lot, they get bigger. People (or animals) with big muscles tend to have offspring with big muscles. What he was wrong about was passing on the traits acquired in life to offspring. If you lose your leg in a duel, your son or daughter will not be born with one leg missing, but they will have a vengeful score to settle.

Until Charles Darwin took a fateful trip to the Galapagos on the HMS Beagle, Lamarckian evolution was all the rage in the biology community. Darwin started writing a book called The Origin of the Species (because Twilight didn't test well among focus groups) aboard the HMS Beagle, which he eventually finished 25 years later. Darwin was a VERY slow writer.

In his book, he wrote that adaptation of organisms did not occur through experience, so giraffes didn't get long necks because they kept stretching it to reach food. Instead, he proposed that natural selection led to evolution. For instance, giraffe necks are long because giraffes with long necks survived better and had more offspring than giraffes with short necks.

According to Darwin, organisms didn't adapt to their environment, instead they acquired spontaneous mutations, and those organisms with beneficial mutations survived more often than others. Those without beneficial mutations were removed out of the population, because they were weak. If that sounds grim, it is. Mother Nature is a real jerk-face.

Darwin's theory of evolution was very radical because most other concepts of evolution at the time suggested that evolution was purpose-driven. For example, giraffes were giraffes because they had been designed to be giraffes. Adaptation by natural selection argues that all evolution occurs by chance, and those organisms that are best suited to their environment survive and reproduce. Those that aren't, don't. 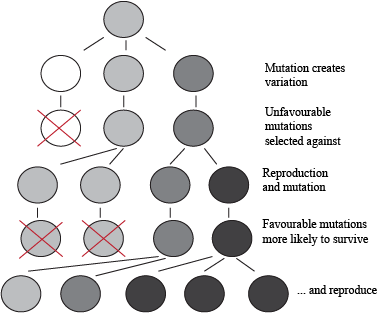 A key aspect of natural selection is that it only operates on heritable traits (that is, genes present in our DNA. More on that later), such as:

While there is no selection for non-heritable traits, such as:

Darwinian evolution contradicts Lamarckian evolution, in that your experiences cannot be passed on for the benefit of your offspring. Oh snap. Keep doing those toe exercises just in case.

Are all traits essential for survival? No. Many traits that are selected for are based upon sexual selection. Features like male peacock feathers, ram horns, or a leopard's Corvette may not appear to help these animals survive, but they allow them to outcompete rivals or appear more attractive to females.

When we talk about traits, these can be any heritable information, ranging from gene sequence to morphological features. While those are the main types of selection, there are other factors that affect the fitness of individuals. These factors are:

Genetic hitchhiking is the selection for a certain allele that has no fitness benefit on its own, but it is good buddies with a gene that does have a fitness benefit. You're selecting for Gene A, and Gene B is also selected for, simply because you can't select for Gene A without Gene B tagging along. They're attached at the hip.

A selective sweep is the process by which a certain trait creates such a massive fitness benefit that every other weaker trait is eliminated from the population rapidly. This is like normal natural selection, except that it happens VERY rapidly. Selective sweeps are very common in viruses and other pathogens, where a mutation that affects fitness will create such a benefit that successful viruses will completely outcompete other pathogens. This is best seen in the genetic shifts that occur with influenza, where they acquire new genetic sequences through mixing of pieces of their genome in a host.

Genetic mixing is quite common, and this process is called recombination. This normally occurs either at the chromosomal level (during meiosis, or "crossing over"), or at the gene level (homologous or non-homologous recombination). Viruses such as HIV frequently recombine sequences to create mutants capable of escaping anti-viral therapies and hiding from the immune system. See the DNA chapter for more information on this. Or not, whatever.

Once a population of organisms reaches a carrying capacity (the maximum population a particular environment can sustain, such as New York City), organisms above capacity must do one of two things: adapt or die (or move to New Jersey).

Extinction is a major problem for species who have adapted to specific environment and whose habitat has either been destroyed or altered to the point that they can no longer survive. Extinction of an entire species happens gradually, so we don't see it that often, though local extinction is quite common. An example of a recent species extinction is the Yangtze River dolphin. Moment of silence, please. 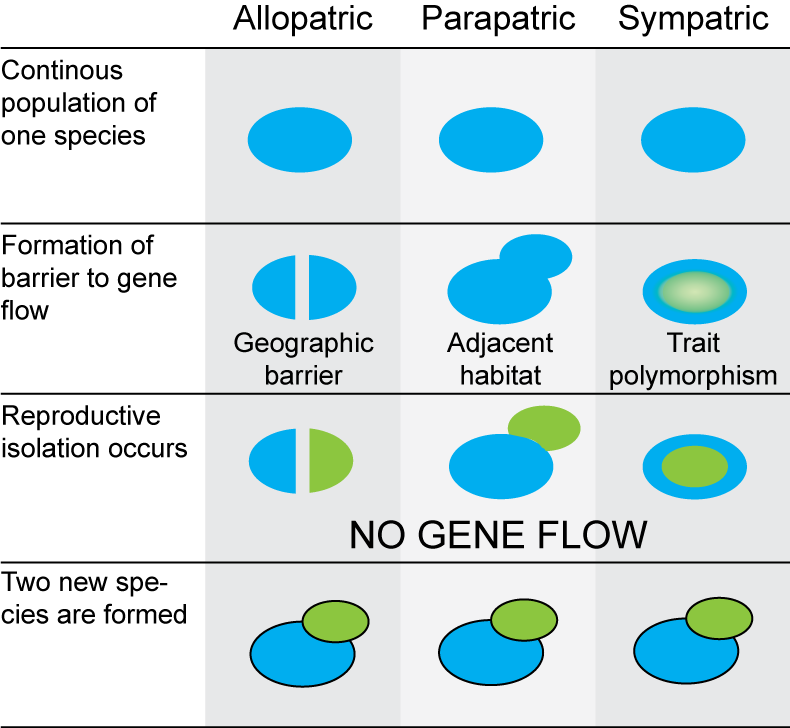 On a brighter note, there are many ways for species to survive through adaptation. There are four major types of speciation:

One of the major drivers of speciation is migration or separation of environments. For example, there were three major migrations in primate evolution that led to various speciation events:

Migration and adaptation are two ways for organisms to survive the constant selective force of natural selection. The third way is to have rich parents.

Baby Steps or Leaps and Bounds?

One of the big debates among evolutionary scientists is whether toilet paper should be placed with the roll facing out or facing in. After deciding that avoidance is the best solution, they moved onto a less divisive debate: does evolutionary change occur in leaps and bounds (saltation) or do small changes lead to divergence (gradualism)?

Saltation is the theory that evolution occurs in "leaps" where no intermediate forms are found. Most evolutionary scientists disagree with saltation, as the fossil record shows that there are abundant evolutionary intermediates. They believe that intermediates missing from the record are absent because they haven't been found yet or they were never fossilized, or are just living a quiet life in Wyoming. 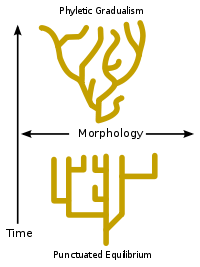 While Charles Darwin gets all the credit for his theory of evolution by natural selection and his work studying wildlife in the Galapagos Islands, Alfred Russell Wallace came up with the same theory at the same time as Darwin. The difference is that Wallace was working class, while Darwin was middle class. Wallace sent to Darwin his theory of evolution for his consideration while Darwin was spending 25 years working on writing The Origin of the Species. Darwin realized that someone else had come up with the same theory, so he wrapped up his book and got it published before poor Wallace saw what had hit him.

To add to Wallace's woes, while Darwin was able to show specimens from his journey to the Galapagos when he returned to England, Wallace could not. Because Wallace was working class, he could not afford passage on a fancy vessel like the HMS Beagle. Instead, his return from studying species in the Amazon rainforest was aboard a shoddy shipping vessel. The boat engine caught fire on the journey, and he lost all of his specimens at sea. Wallace was the Charlie Brown of evolutionary science.