What's a Little Homology Between Friends?

You don't know what DNA and proteins are? You should check out the Shmoop chapters on DNA Replication and Gene to Protein. Then come back. We'll wait.

Homology, a concept introduced in the Macroevolution section, is when two features are similar in structure and function in two organisms and in their recently shared ancestor. Using a previous example, wings of bats and wings of a pigeon would not be homologous. While the wings are similar in structure and function, bats and pigeons don't have a shared common ancestor. On the other hand, wings of a pigeon and wings of an eagle are homologous. 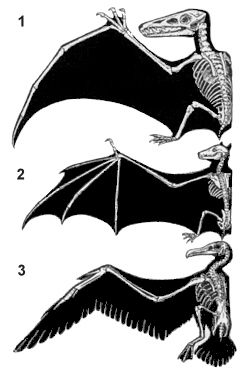 Like wings of bats and birds are not homologous, dolphins and fish do not share homologous aquatic features (dolphins are mammals, fish are fish). What do you call features that are similar but not homologous? They are analogous, having features that evolved to resemble each other through convergent evolution. They might also be a government conspiracy, like the pig-skunk, that we are not legally permitted to talk about. 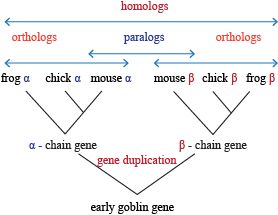 Homology comes in a wide selection of flavors, including:

Evolution Models: Sexier Than You Think

Divergent evolution is the traditional evolution that we think of, where organisms vary in features and diverge in traits originating from a common ancestor. However, sometimes two organisms get so different from each other that they start resembling other organisms. Bats' wings and birds' wings are one example of convergent evolution. The final type of evolution is parallel evolution, where organisms develop similar features and originate from the same ancestor. Similarity of features within placental and marsupial mammals is an example of parallel evolution.

How do we determine homology with molecular evolution? Traditionally, it was hard to look at DNA sequence, so scientists would compare amino acid sequences. Amino acids are divided into four major groups:

Any mutations that lead to conversion of an amino acid from one group to another would be considered divergent evolution. How do amino acids change? Mutations in the DNA. Fortunately, DNA is also divided into four nucleotides:

Trees You Can't Built Forts In 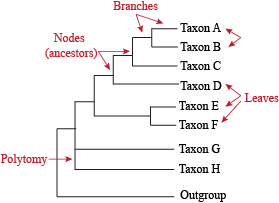 There are three major types of phylogenetic trees, including: 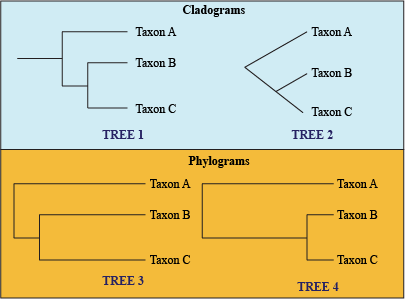 If you've been reading this chapter, you'd probably get the impression that organisms are constantly changing features, like some type of chameleon. Technically this is true, but in reality most mutations that occur in an organism are unnoticeable. The neutral model of evolution argues that most mutations that occur are neither deleterious nor advantageous. They are mostly neutral and don't affect the fitness of that organism. 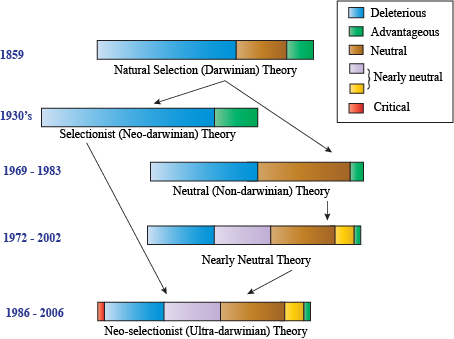 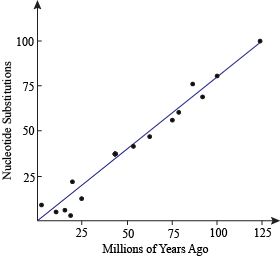 
Figure shows an approximation of the molecular clock. If you take two pieces of DNA that are homologous in two organisms and count the number of substitutions between these DNA pieces, they should be proportional to how long ago they had a common ancestor. That proportion is the universal rate of mutation.

While the universal molecular clock theory seems nice, it often leads to errors when calculating the ages between two species. It was determined that some organisms have a neutral mutation rate twice that of related organisms. Imagine a clock that has only 30 seconds in a minute compared to another clock that had 60. You'd say: "What is this, Mars?" You'd also see a lot more time pass with the fast clock compared to the slow, even though they both were built by the same clockmaker. This violates the universal molecular clock theory. And everything the Swiss hold dear.

To account for these differences, scientists have altered the molecular clock from a universal model to other models, including:

These modifications to the neutral clock rate have led to the "nearly-neutral" model of evolution, because it would be way too easy to just be "neutral."

We've done a lot of cool things using molecular evolution, such as proving that some of us are descended from humans mating with Neanderthals (Europeans, of course).

We can use phylogenetics and molecular evolution to recreate ancestral sequences. If two species have a specific nucleotide at a certain position, it is likely that their common ancestor had the same sequence. Using statistics and phylogenetics, we can make proteins that would be found in dinosaurs. That's right, dino DNA.