Ah, speciation, the great manufacturer of biodiversity. If mighty speciation wasn't combating the ever-present force of extinction on our planet, we'd be out of species. No more wood-eating catfish, snub-nosed monkeys, or T-rex leeches. How dull. 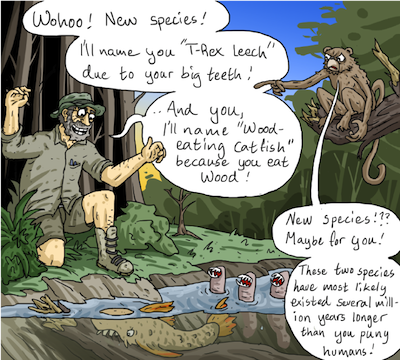 Even though we have speciation to thank for our living planet, it's a process we often take for granted. We say things like, the blah-blah species is descended from blah-blah-blah species. The such-and-such group diversified in Late Whenever. These statements do nothing to convey how incredibly awesome speciation is. What is speciation? How exactly does a new species arise?

In this module we'll answer these questions. Speciation is the evolutionary process in which a single lineage splits into two separate lineages. As it turns out, speciation and cooking have something in common. No, there won't be any cookies, but there is a recipe that leads to speciation. As any cook out there knows, there can also be many variations for a given recipe. In a nutshell, the process goes something like this:

1) We start with one species—a group of individuals that can all mate with each other and share genes.

2) A new geographic barrier cuts the population in half, disrupting gene flow.

3) The subpopulations continue to evolve in all the normal ways: genetic drift, mutation, natural selection, and sexual selection. However, the changes that occur in one population are not the same changes that are occurring in the other subpopulation. Even though they both evolve, they evolve differently.

4) Speciation is complete when the two subpopulations are no longer capable of reproducing with each other, even if they are brought back together. Maybe they don't recognize each other, or maybe enough genetic changes have accumulated during their separation that they couldn't reproduce even if they wanted to.

Now we know the recipe for speciation, but what about the super secret recipe for Coca-Cola? Sorry, we won't be giving that one away. You will learn about the roles of natural selection, reproductive isolation, and geography in the speciation process. You will discover why species aren't as straightforward as they seem, and learn some tools for defining and understanding them when it gets confusing.

Be prepared to learn new vocabulary, because it's biology after all and biologists just love big words with simple meanings. Be prepared to use your imagination, because speciation is a slow process and cannot be seen or measured in a human lifetime (or can it?), so we often ask you to imagine different scenarios that would lead to speciation. You're going to have to think like a liger, a beetle, and a slime mold for this one.

You will also gain a sense of why speciation is an important area of study. Speciation provides the framework for evolutionary biologists to understand and organize the earth's biodiversity. Studying speciation requires that we look at how ecology determines evolution, and vice versa. And it gives us a way to look back into our own evolutionary history and discover that we are related to all life on this planet. If it weren't for speciation, you wouldn't be here reading about speciation!

Evolution the Berkeley Way
Check out courses, the latest news on evolution, and everything in between.

NewScientist and Evolution
Find some of the latest news on evolution here.

Speciation: Past, Present, and Future
Get a quick taste of the study of speciation through the ages, starting back with Darwin.

Interactive Tree of Life
We could spend hours playing with this thing. Check out the rest of the site, too, while you're at it.

Next
More on Speciation Navigation