What is a Species

Sometimes the difference between a subspecies and a species can seem a bit fuzzy, because there's really no clear biological delineation between them.

Species requirements of the BSC:

• Species are groups of organisms that can interbreed

• The must be natural populations

• There must be no gene flow (not just no direct mating)

• No hybridization is allowed, unless hybrids are infertile and/or inviable

There are four modes of evolution that can be demonstrated by a phylogenetic tree, and speciation is only one of them:

Stasis—when not much change is occurring in a lineage over time, it's just doing its thing being a species.

All these -patry's, how to keep them straight? Remembering root word helps (allo=different, sym=same), but nothing beats a visual: 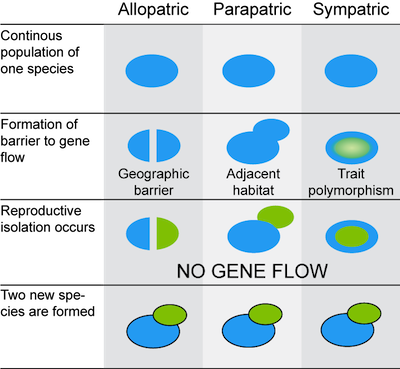 Bring in the Reinforcement

Reinforcement is the process in which natural selection leads to reproductive isolation between two species. It can seem tricky, but it has three simple steps:

1) Reduced hybrid fitness: Hybrids are less fit than parent species, usually because of their intermediate phenotype

2) Natural selection favors assortative mating (the tendency for like to mate with like). The parents are actively selected for if they mate with their own type and selected against if they mate with other types. Therefore, reinforcement is an active (rather than passive) evolutionary process

3) Once assortative mating is an established trait in the parent species, there is no gene flow between them—bingo. Reproductive isolation.

Wait, what are incipient species?

What makes adaptive radiation so special? That is to say, why is it any different from all the other examples of organisms adapting to their environments with generally successful results?

There are few things that make adaptive radiation different than just environmental adaptation. First, all the species involved are descended from a common ancestor, which likely had very different habitat requirements than its descendants. Second, adaptive radiation doesn't just result in organisms being well matched to their environment; it results in the generation of new species. Third, the process is relatively fast, compared to background rates of speciation for a given lineage.

Hybridization: This occurs when two species merge into one. According to the BSC, this suggests they were one species all along.