Hybridization is the anti-speciation. Successful species exist by avoiding the formation of hybrids. At least that's what we've been saying all along. As it turns out, biologists love to make exceptions. Don't worry—we have you covered.

We'll start off by revisiting the hybrid fitness and adaptive valleys phenomenon. What would happen if hybrids had higher fitness than either of their parent species? Maybe to intermediate form is better adapted to the environment than the parent forms. In which case, we could get an adaptive peak in the intermediate phenotype. 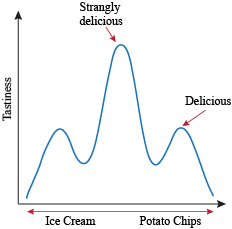 What happens when this is the case? Species 1 (peanut butter) mates with Species 2 (chocolate), and their hybrids are wildly successful (Reese's). Things are going really well, so reproductive isolation between the species completely dissolves. In this type of hybridization, we need to go back to our BSC roots. We conclude that the parent species were actually not separate species at all, because there is no restriction to gene flow between them. Since everyone can mate with everyone, we've got one big happy species.

What was that? There are other exceptions? What luck. Assume the hybrids prefer to mate with the other hybrids, and not with the parent species. Sounds like assortative mating, an important ingredient in the speciation recipe. The trouble is that it's very rare for a hybrid population to have zero mating with individuals from the parent species (called backcrossing). The level of backcrossing can be low, but it still exists, so we're missing the main ingredient in our recipe: reproductive isolation.

It is possible to get reproductive isolation between hybrids and parent, though. This occurs especially among plants, which are often polyploidy—a trait usually fatal to animals. If ploidy levels of hybrids are different than parents, reproductive isolation can follow. It's not super common. Only 2-4% of plant species are suspected to have come about via hybrid speciation. It's not impossible; sometimes, when the genetics are just right, hybrids cannot backcross. Since they can only mate with other hybrids—bingo—we get a new species. It's a hybrid species that can't hybridize.

Thanks for indulging us in our favorite game of biological exception-making. Cheap thrills, you know?

Ploidy can do very strange things, even beyond hybrid speciation. One example of ploidy at work for the common good is the seedless watermelon. Seed spitting competitions aside, watermelon seeds are annoying and significantly detract from our bright summer days. Scientists have come up with a remedy: by manipulating the ploidy of watermelon plants from their standard diploidy (2 chromosome copies) to triploidy (3 copies), we can effectively confuse the plants into not being able to make seeds. Read more about the genetic details here.