Speciation - Bring in the Reinforcements

Bring in the Reinforcements

Imagine an allopatric speciation scenario; a continuous population of species gets divided, and as time goes on the two populations begin to diverge into separate species. What's to say that individuals from those two species couldn't mate if they we're brought back into contact with one another? If a geographic barrier is removed or a corridor is formed after a period of geographic separation, it is called secondary contact. What happens on secondary contact is of the utmost interest to evolutionary biologists. The organisms can either mate and prove that they're still one species, which is super interesting, or they can exhibit separate species identities by not mating, which is super interesting. The latter scenario begs the big question, why?

Step into the Hybrid Zone

One theory that addresses these questions is the theory of reinforcement. Sounds tough, but it makes a lot of sense. Here's the scenario: when the species was divided (allopatry), each side adapts to its environment, which weeds out less fit individuals. Different environments favor different characteristics, so individuals in different environments evolve in different ways. Biologists often think of this in terms of adaptive peaks and valleys, like the one shown here: 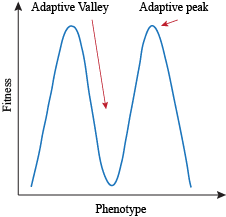 A similar scenario occurs when imagining combinations of our favorite foods. Just because ice cream and Cheetos are both delicious, doesn't mean we want to eat a big bowl of Cheetos ice cream. 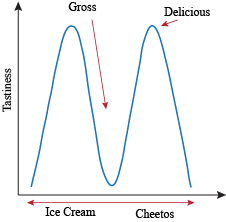 Parent species produce fitter offspring if they don't hybridize. The individuals from one species that refuse to mate with the individuals of another species produce more (and/or better) offspring. This type of mating, called assortative mating, is very important for avoiding potentially disadvantageous hybridization. Assortative mating is a fancy term for a simple pattern: like mates with like. This is opposed to non-assortative mating (like mates with different) or random mating (whoever mates with whoever). When the hybrid zone represents an area of reduced fitness, natural selection will favor individuals that can recognize and mate with their own kind and avoid producing hybrid offspring.

If you're a horse, you're at an evolutionary advantage to not mate with donkeys. Even though you'll have a cute cuddly mule foal on your hands (hooves?), that mule will be sterile and your genes run into an evolutionary dead-end. Horses that only mate with horses and avoid mating with donkeys are more fit than horses that will mate indiscriminately. They are also much more likely to get some grand-horses.

As much as reinforcement seems like a straightforward concept, it's still an active area of evolutionary research and biologists have a lot of questions about how it actually works in nature. Perhaps this research attention stems from reinforcement's role in transforming hybrid zones into real reproductive barriers and maintaining species distinctions. This happens even after secondary contact, making it a common component of any kind of speciation—allopatric, sympatric, and parapatric.

Assortative mating is a common phenomenon among wild animals such as lions, exotic birds, and movie stars. Check out this post describing assortative mating patterns among celebrities. This is for real.