Speciation - The Geography of Speciation

The Geography of Speciation

The where of speciation can often be really informative in answering the why's and how's that keep evolutionary biologists up at night. Here are a couple of the major geography-of-speciation terms, each describing a different scenario of speciation based on how organisms use and share space.

Allopatry: One of the easiest speciation scenarios to imagine is allopatric speciation, in which populations become reproductively isolated by a geographic barrier. For example, a mountain range lifts and separates two populations of desert lizards. A river changes its channel right down the middle of a mouse population. A fire burns most of a pine forest leaving only the edges intact. A flock of birds colonizes a virgin island with no exchange from the mainland. A hobbit leaves the shire pursuing his precious ring and becomes a creepy, pale, psychotic thing. Oh, wait, that’s Gollum.

Geographic barriers can be huge or small. A single dam can completely cut off gene flow among populations of river-dwelling fish. On the other end of the spectrum are entire continents or land masses that float around and separate continuous populations. 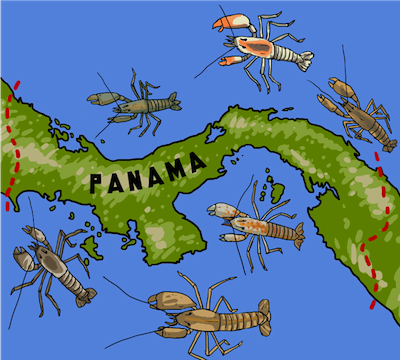 There is evidence that the formation of the Isthmus of Panama created a geographic barrier down the middle of a population of snapping shrimp. Now, 300 million years later, the shrimp on either side have diverged into distinct species.

Sympatry: This is a little bit harder to get than allopatry. Sympatric isolation takes place between individuals that live in the same place. For a long time scientists didn't even know if this was possible, but it is now generally agreed that other isolating barriers can be strong enough to separate populations, even in the absence of some geographic barrier.

The first step in sympatric speciation is that the initial population must be polymorphic for a given trait or set of traits, meaning that there are different versions of the trait in the population—they're not all the same. Each different form of the trait is perfectly fit so there's not really any advantage to being one over the other, but hybrids between them are less fit so there is an advantage to not being a hybrid. No mudbloods, please.

This happens quite a bit via pollinator isolation. Assume there is a population of red flowers that are pollinated by hummingbirds. A polymorphism arises in that population that creates pink mutants, which are perfectly able to reproduce with the red ones. Saddly, the hummingbirds don't recognize them. Bees, on the other hand, recognize and like them. They'll even pollinate the red ones, making gene flow possible. What if the pink-red hybrids just aren't red enough for the hummingbirds, and the bees think they're weird? At that point, the hybrids are stuck without a reliable pollinator. This means certain doom. After enough time and generations, the powers of natural selection will act to keep the hybrid success rate low, while the pink and red flowers do perfectly well on their own.

Two closely-related species of Monkeyflower, Mimulus cardinalis (red) and M. lewisii (pink), exhibit a classic example of pollinator isolation. M. cardinalis is pollinated by hummingbirds, while M. lewisii is pollinated by bees. There is very little pollination between them. When there is, the resulting hybrids produce about half as many offspring as the parent species.

Other isolating barriers can do the same. A common speciation scenario for insects is a host plant shift, a type of ecological isolation. Many herbivorous insects are host plant specialists, meaning that they strongly prefer or require just one type of plant to feed on. Sounds dull, no?

In the case of many butterflies, their whole lifecycle revolves around their host plant: females lay eggs on healthy plants, eggs hatch and spend their entire development with nothing to do but eat (okay, that part sounds better), they pupate on the plant (that sounds gross), and often times, the adult butterflies will find each other and mate on the plant.

It's no wonder that the host plant identity can have a big impact on adults' mating decisions, and on the fitness of their offspring. If a polymorphism arises that makes one group of butterflies defect and decide that another host plant is tastier, then the scene is ripe for speciation. Suddenly, we have a once continuous population diverging into two: they live and reproduce on a different set of plants, they mate with a different subset of the population, and eventually they might split into two species. All of this happens despite remaining in the same habitat.

Parapatric: Somewhere in between sympatric and allopatric speciation, parapatric speciation occurs when new species evolve from one continuous population whose range includes some geographic variation. It also happens when two habitats are connected, but are not really similar. If individuals in one part of the range reproduce more with each other than with those in the other part, the population can start to look like two distinct groups at either side with a hybrid zone in between them. And if they're different enough reproductive isolation can come in to play and voila—new species!

Because of the role of habitat separation in forming the different species, parapatric speciation is very similar to allopatric speciation. The difference, though, is that the habitats are connected in parapatric speciation, whereas they're completely separated in allopatric speciation. This makes the hybrid zone particularly important, and what goes on in the intermediate habitat can determine whether the two populations ever split into distinct species. When the hybrid zone is large, non-geographic isolating mechanisms have to be extra strong to prevent hybridization, and a little reinforcement probably wouldn't hurt either. Wait, what is reinforcement? It's the topic of the next section, that's what.

Check out a crash course in speciation here.