A characteristic or feature that is maintained by natural selection because it offers a fitness advantage.

The frequency of a certain allele within a population or species, usually written as the percent of individuals that possess that allele.

Two species are allopatric if their ranges are completely disconnected.

The evolutionary changes that occur within a lineage.

A form of non-random mating in which individuals prefer to mate with other individuals that are similar to them in some important characteristic. In other words, like mates with like.

The evolutionary changes that result in the splitting of lineages.

In a state of agreement; if two ideas are in agreement with each other, there is congruence between them.

The accumulation of differences (genetic, behavioral, ecological, etc.) between two groups of the same lineage, often resulting in the splitting of that lineage into two distinct species.

The reproductive success of an individual or genotype.

Occurs when the hybrid offspring of two parent species does not produce fertile, viable, or compatible gametes and therefore cannot reproduce. Also known as Hybrid Sterility.

Occurs when the hybrid offspring of two parent species has reduced fitness to the extent that it cannot mature into a healthy, reproductive adult.

The resulting offspring from a successful mating of two different species.

a group of organisms that are thought to be on the brink of diverging into a distinct species, but are still capable of interbreeding with other members of the species.

The variation (genetic or phenotypic) that exists among all the individuals of the same species.

Unable to live and/or develop, even under favorable conditions.

A small, specialized habitat within a larger habitat. Most habitats contain many microhabitats. For example, a pine forest habitat might include microhabitats such as underneath moist rocks, in the tree canopy, inside hollow trees, near streams, etc.

The most recent lineage from which all members of a given set of species descended. For example: 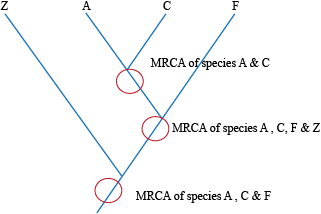 Two species are parapatric if their ranges are right next to each other but do not significantly overlap.

Relating to observable traits (often morphological) of a species.

The evolutionary history of a species or group of species, represented graphically by a phylogenetic tree.

When two or more distinct phenotypes of a given trait exist within the same population or species.

This is a group of interbreeding individuals of the same species. Technically they don't have to actually interbreed; they just have to be able to at some point in their lives. So even though a grandma elephant isn't making baby elephants anymore, she is still part of the population if she lives in the same area as the rest of the herd.

A form of reproductive isolation in which individuals of two species mate, but their zygote cannot successfully reproduce. This can be because the zygote is inviable and dies (either before or after birth), or because the resulting offspring is sterile.

A form of reproductive isolation in which no hybrid zygote is ever formed, either because the individuals of two species never mate, or because their gametes (sperm and egg) are incompatible and never form a zygote.

The process in which natural selection acts to increase reproductive isolation among sister species.

If populations or individuals cannot produce fertile, viable offspring together, then they are said to be reproductively isolated. Causes of reproductive isolation can be differences in geography, behavior, ecology, morphology, etc.

The evolutionary process in which individuals that have desirable sexual characteristics are more successful at attracting mates.

A branching point on a phylogenetic tree denoting one lineage splitting into two. Not really an "event" by our time frame, as speciation occurs on evolutionary timescales.

A subset of a species whose members are capable of interbreeding with outside member of the species but usually don't, often because of a geographic barrier.

Species are sympatric if they occupy the same range or, at least, have ranges with significant overlap.

Having the ability to live, thrive