Speciation - What is a Species?

What is a Species?

Most people can look at a dog and a horse and guess that they are two different species. That is, unless it's a Great Dane. Those must be some kind of dog-horse hybrid, right? Just kidding. The species game becomes a little more difficult when things start looking more similar. For instance, are toy poodles and Great Danes in the same species? Yep. They're in the species Canis lupis familiaris. What about broccoli and cabbage? Yep. They're in the species Brassica oleracea. 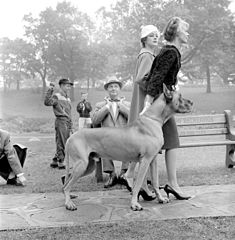 There are many cases in biology where defining species gets a little fuzzy. The trouble is that there are so many exceptions. What if horses and dogs could mate and have horse-dog offspring? Aside from making what would probably resemble a Great Dane, it would really confuse our idea of horses and dogs as separate species. Maybe horse-dogs belong to the sci-fi world, but there are tons of real examples of hybridization between what we think of as distinct species.

What about organisms that don't mate at all? Lots of microbes and plants reproduce clonally—are they each their own species? Even weirder, some organisms can pick up random bits of DNA from other organisms and make it their own. Are these critters the original species, or a new species altogether? This is called horizontal gene transfer (HGT), and strange as it might sound it happens all the time, even among organisms that mate. Bacteria are notorious DNA collectors, and there's even evidence of shared genes between old world monkeys and housecats because of HGT. Imagine if you ate a peach and a little bit of stray peach DNA escaped and joined up with your own. Weird. While HGT might sound peachy, it makes defining a species really hard.

If these exceptions are making your head spin, join the club. People have been arguing about species definitions for a long time, and not just about the details. The debate actually starts with a pretty basic question: are species even real?

If we're talking about the difference between a dog, a horse, and a cabbage, then the answer seems obvious. If we're talking about the difference between the hybridizing oak species Quercus robur, Q. petraea, Q. pubescens, and Q. frainetto, then the answer isn't as easy. Are species actually distinct biological entities, or are they just a way that biologists categorize the world around them with no real scientific basis?

Even if scientists can't always define species, most will try to convince you that they're more than mere human constructs. Yes, there are lots of exceptions, problems, and unanswered questions when it comes to making a universal species definition. Even so, there are a number of compelling reasons to believe in species.

First off, species recognition is intuitive. Most people can distinguish between groups of organisms that look similar, as long as there are a few subtle differences. The distinctions that we make would probably be similar to the distinctions Bob, the body builder would make. In biology we would say that the distinctions are congruent.

Congruence goes further than just friends and family. There have been several studies that demonstrate congruence between the species definitions made by western scientists and those made by indigenous cultures. There is a famous story about Ernst Mayr, the fancy pants Harvard biologist. Ernst visited the island of New Guinea and asked the local tribesmen to identify the bird species of the island. Amazingly, the tribe distinguished 136 species of birds, while classic Linnaean taxonomy knew of 137. That's an incredible amount of congruence among species delineations, and it just goes to show that we don't need formal taxonomy training to be great biologists. There is just something intuitively recognizable and distinguishable about some groups of species, they must be more than figments of our scientific imaginations.

Second off, even if organisms can hybridize, or move, or otherwise thwart our convenient species definitions, they still tend to cluster into more or less distinct groups. It's not like there's a gradual continuum of birds ranging from eagles to hummingbirds—they tend to come in different types, each more or less distinguishable from the next. Sure, there might be mixing among some groups, but the mixing among them is smaller than the mixing within them, so they form clusters. Individuals from one group tend to mate with other individuals from their own group more often that with individuals from a different group. Notice the vocabulary here: groups, types, clusters, or maybe species.

You think you know about species, eh? Then we challenge you to identify the incredibly diverse species of the Star Wars world.