The Hottest New Trends for Acids

So far we've seen a few definitions of an acid, with the most popular being the Brønsted-Lowry one that tells us an acid transfers proton. We also looked at examples of strong acids and weak acids and how their equilibriums in water play out. Up until this section, we could figure out the relative strength of an acid by knowing its acid-dissociation constant: the bigger the acid-dissociation constant, the stronger the acid.

In the spirit of keepin' it real and honest, it's probably best to just memorize a bunch of the acids (and bases) we went over already and whether they are strong or weak. If you forget a few, we'll talk about the properties that determine acid strength in this section—it just might help you out if you find yourself in a pickle.

The Periodic Table is a basically a chemistry treasure map. There might not be pot of gold hidden in it, but it might help you ace your next test. We'll be referring to it in this guide to help predict acid strength.

Two big predictors of acid strength are the H-A bond strength and the H-A bond polarity. Both properties can be mapped on to the Periodic Table and follow certain trends.

Let's take a look at the strength of the halogen (Group 7) containing acids HF, HCl, HBr, and HI.

The bond strength of an acid generally depends on the size of the 'A' atom: the smaller the 'A' atom, the stronger the H-A bond. When going down a row in the Periodic Table (see figure below), the atoms get larger so the strength of the bonds get weaker, which means the acids get stronger. For the halogen-containing acids above, HF has the strongest bond and is the weakest acid. The strong bond between the more similarly-sized 'H' and 'F' atoms doesn't want to break and allow the 'H' to transfer.

HI, on the other hand, is a very strong acid. The big 'I' atom overpowers the helpless little 'H' and the H-I bond is very weak. Therefore, HI is a great proton transferer and one heck of an acid (Ka ~ 109 M). 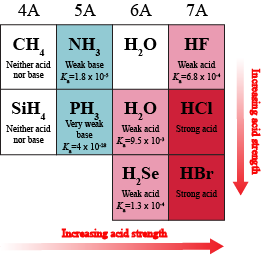 The hydrofluoric acid (HF) bond is polar because F really loves electrons. Let's compare this to CH4. Carbon is in the same row as fluorine (check out the figure above), but HF is a much stronger acid then CH4. The C-H bonds are not polar compared to the H-F bond. CH4 is a really weak acid.

Here's another class of acids that also have predictable strengths based on the Periodic Table: the oxoacids. They have the general formula, HnYOm.

Some real-world examples are H2CO3, H2PO4, and HNO3. These acids contain an O-H bond that dissociates to form a hydronium ion and a conjugate base:

(Note: In this section, when we say "Y atom," we don't mean yttrium. We're using the Y as a placeholder for an element.)

If Y has a big electron crush (is highly electronegative) it will be happy to be on the right side of the equilibrium. That's because there are more electrons on the molecule on the right side of the equilibrium. Even though Y doesn't get the electrons all to itself, it still gets some satisfaction from knowing the neighboring oxygen atom is enjoying them. Isn't that nice?

Overall, the more electronegative the Y atom is, the better it can stabilize the Y-O- product and the stronger the acid will be. The hypohalous acid series does a good job showing increasing acid strength with increasing electronegativity of the Y atom (in this case, a halogen atom).

The series of oxoacids of chlorine illustrates what we mean: 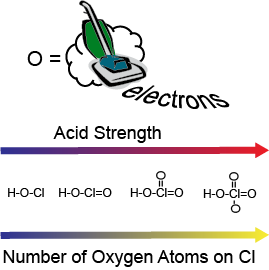 While the above trends and examples will be useful, you will inevitably have close encounters with alien molecules. Reminds us of an old Spielberg movie. When we need to compare the acidity of molecules we haven't seen before, try to determine how many electron vacuum cleaners (if any) there are on the molecule. These "vacuum cleaner" atoms are typically those with high electronegativities, like oxygen. These atoms stabilize the lone pair of electrons that usually result when an acid transfers a proton. The better able the molecule can stabilize the extra electrons, the stronger it will be as an acid.

Previous Next
More on Acids and Bases Navigation