Pardon Me While I Decompose

We all have a pretty good idea of what decomposition means. Seriously, how many CSI or Law and Order type shows are there now? They talk about decomposition all the time. Decomposition reactions are exactly as you would expect: a breakdown or separation of a chemical compound into elements or more simple compounds.

Welcome to Opposite Day

During the process, substance AB decomposes or breaks apart to produce substance A and B.

In the simplest type of decomposition reaction, a compound breaks down into its component elements. A simple everyday life type of example would be the decomposition of water into hydrogen and oxygen like so:

When is the last time you poured yourself a nice glass of water and it spontaneously turned into hydrogen and oxygen? We hope the answer is never. The truth is, decomposition reactions generally don't spontaneously occur. They usually need some driving force to make them happen. In the case of water becoming hydrogen and oxygen, the driving force is energy in the form of electricity. The process is called "splitting water." If you want to try to split water at home check out these instructions here or you can watch a video here. 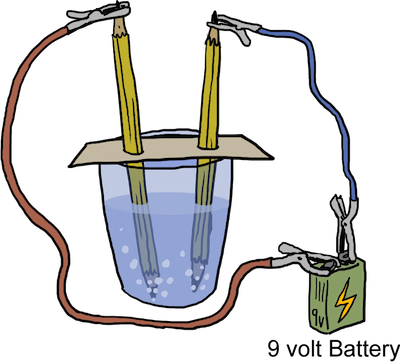 Electrolysis of Water: A Form of Decomposition

A great example of a thermal decomposition reaction (which is the type of decomposition that occurs with the addition of heat) is the breakdown of copper carbonate, CuCO3. If a test tube of CuCO3 is heated in a Bunsen burner the solid powder "jumps" around as molecules of carbon dioxide gas are released. A solid remains in the tube but its identity is now copper oxide, CuO. Check it out in this awesome video.

For a select number of chemical compounds, the energy required for decomposition is rather small. In these instances, a minor shock or bump is just enough to do the trick. Lucky for us, we've developed a way to exploit one such decomposition reaction in a manner that saves thousands of lives a year. Sodium azide, Na(N3)2, explosively decomposes into nitrogen gas, N2, and sodium after a fairly small impact. We use this process to inflate car airbags during a collision. 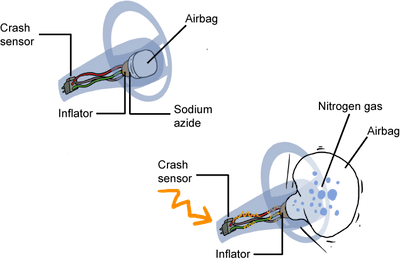 Remember: a decomposition reaction is the opposite of a synthesis reaction, so when you see a single reactant yield more than one product you've got decomposition on your hands.

Check out this video demonstrating the decomposition of McDonald's Burgers and Fries. It might make you rethink that next Big Mac.