In ametal displacement reaction, a more active metal kicks out a less active metal from a compound. Talk about elemental unfriendliness. For example, a big bad iron atom will displace copper from a copper sulfate molecule because iron is more reactive than copper. Poor copper is left to fend for itself.

Just so we're all on the same page, the "aq" means aqueous, or the compound is dissolved in water.

Guessing which metals are the bigger bullies requires some detective work. Never fear, scientists have created a useful table called an "activity series." It's a ranking of metals from most active to least active. Remember: more active metals will kick out less active metals from compounds in a heartbeat. 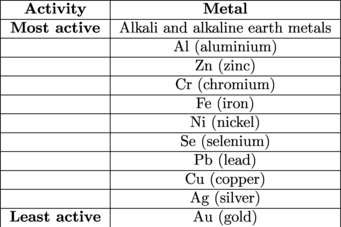 The Activity Series of Common Metals

Hydrogen can also be displaced from compounds by all alkali metals and even some alkaline earth metals. Do you recall what happens when a chunk of sodium is thrown in water? (P.S. Do not try this at home.) An explosion occurs because when hydrogen is displaced from water, it quickly forms hydrogen gas. The reaction is also exothermic (meaning it releases heat) which causes the hydrogen gas to ignite.

Many metals, including the less active metals that don't react with water, are capable of displacing hydrogen from acids. Here's a quick and easy example:

Wondering where that came from? Check out the periodic table.

Here's an example you've been waiting for your whole life:

According to our activity series, Cl is more active than I. When the two meet face to face in battle, Cl wins and displaces I.

The scientists who revolutionized the metal-catalyzed metathesis reaction were awarded the 2005 Nobel Prize in chemistry. This is a special sort of metathesis reaction which is speeded up by the presence of certain metal containing compounds. Check out their work here and here.