Simply put, chemistry is the science of stuff. By stuff, we mean anything that takes up some amount of space. In a nutshell (or perhaps a legume shell), chemistry is a branch of science that revolves around one simple little word: matter. 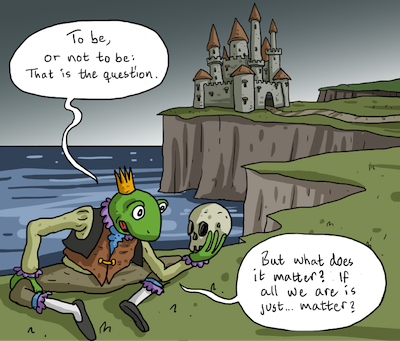 Chemistry is the study of the composition and properties of matter and the changes it undergoes. In this guide, we'll examine the different states of matter and what happens when matter moves from one state to another.

Nova States of Matter Thingamajig
This PBS Nova site has a really neat interactive tool to virtually convert water, carbon dioxide, or hydrogen into their different states of matter.

Science Projects
This website has a bunch of easy and dare-we-say fun experiments that can be performed at home. Heck, you might even learn something.

NASA States of Matter
Those guys and gals at NASA sure know what they're doing. On this website all things states of matter are explained.

PhEt States of Matter Simulation
Have a few minutes to kill? Do you like to push buttons and learn at the same time? If yes click the link. Do it.

State of Matter Simulation
This is a simple simulation showing the differences between the states of matter.

Archimedes Principle Ted Talk
Who doesn't love a good Ted Talk? If you like Archimedes and how he thinks (err, thought) this Ted Talk is for you!

Basic States of Matter
As the name suggests, this video provides a clear and simple introduction to the different states of matter.

Chemistry with Mr. Causey
Here is another introductory video covering the phases of matter. Clear, concise, and full of color.

States of Matter Sing-a-Long
Yet another awesome review, except this time the whole lesson is set to catchy music.

Condensed Phases of Matter
This video is a lesson on the condensed phases of matter. It may be lengthy but totally worth it. There are lots of visual demonstrations to go along with some of the more difficult concepts. This guy knows his stuff.

States of Matter—Hardcore
This video is for those who have mastered the states of matter basics. If you are ready to step it up to the next level, click here and behold the world of liquid crystals, supercritical fluids, and pseudosolids.

Next
More on Properties of Matter Navigation