We've already discussed what the three major phases of matter are: solids, liquids, and gases. Most substances can exist in all three phases depending on the temperature and pressure. A few special substances, such as water, can actually exist in all three phases under ordinary conditions. A phase change occurs when energy is added or removed from a system, turning one phase into another phase. 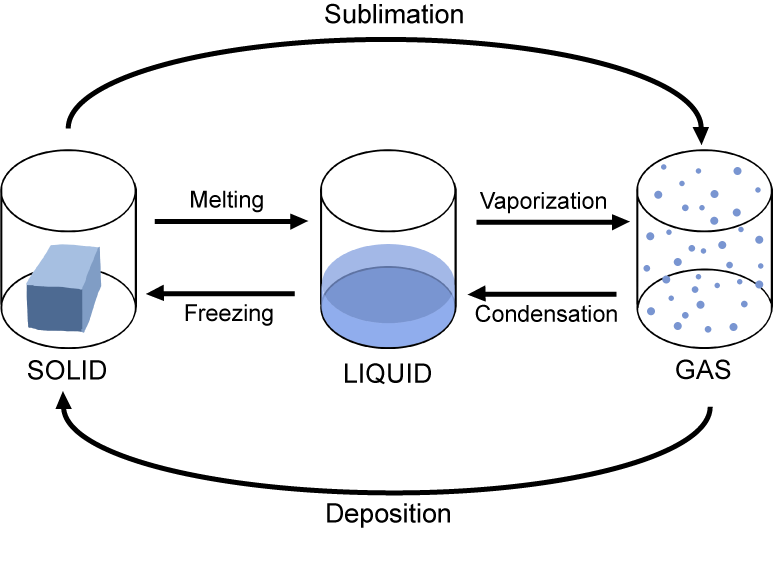 Remember that famous phase change scene from the Wizard of Oz? You know the one. "I'm melting, I'm melting!" The Wicked Witch turns from a solid to a liquid puddle. She melts, which is the physical process where particles rearrange from a crystal lattice configuration into a much freer form. Bet you never thought of that scene in such a scientific way—if you have, we salute you.

We can also melt something without a huge Hollywood budget. Just toss an ice cube into a glass of warm water. The solid ice cube will become liquid water.

What's actually happening to make this possible? The liquid water is at a higher temperature than the ice, so heat (the transfer of energy from an object at a higher temperature to an object at a lower temperature) flows from the water to the ice. As the ice absorbs the heat its temperature rises. When the temperature of the ice reaches the ice's melting point, the energy that is absorbed no longer raises the temperature but instead breaks up the attractive forces holding the water molecules together in the solid state. These forces are primarily hydrogen bonds. When they are broken the water molecules on the surface of the ice change into the liquid phase. The ice cube will continue to shrink until no solid remains.

Check out this stop-motion video of melting ice in action. 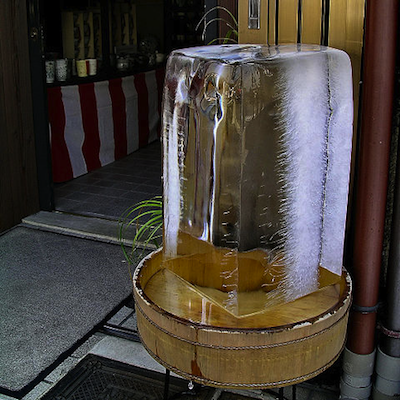 What happens when all of the ice is melted and only the liquid phase remains? If we continue to heat the glass of water, the additional energy added increases the kinetic energy of the liquid molecules. This means the particles are bouncing all over the place, getting crazy and wild.

As a consequence, the partying raises the temperature of the water. Eventually the kinetic energy is raised to the point where the particles can escape from the liquid phase and enter the gas phase. Vaporization is the process by which a liquid changes to a gas (or vapor). Usually the particles on the surface of the liquid escape first by a process called evaporation. 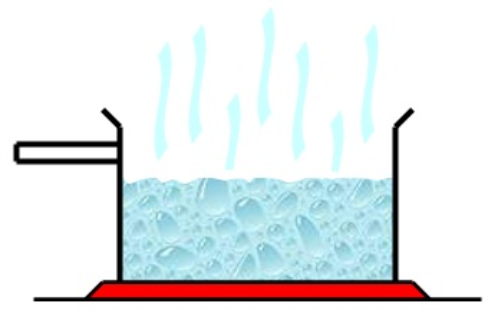 Here's some evaporation in action. (Image from here.)

In a closed container, the water vapor collects above the liquid and exerts pressure on the walls known as vapor pressure. When the vapor pressure becomes more than the container walls can handle an explosion can occur. Dangerous? Yes. Crazy Video? Of course.

The boiling point is the temperature at which a liquid is converted to a gas, which is also when the vapor pressure of a liquid equals atmospheric pressure. Basically at the boiling point all of the molecules, not just the surface molecules, have enough energy to vaporize.

Some substances can change directly from the solid to the gas phase, bypassing the liquid phase entirely. This process is called sublimation. Check out this video of the sublimation of dry ice (solid CO2). It has the ability to sublime at room temperature. 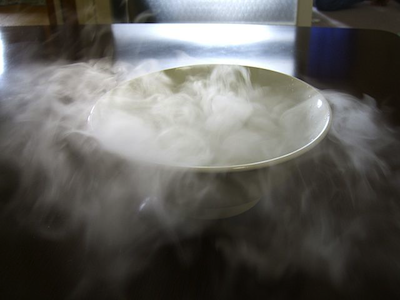 When enough energy has been removed from the system and the particles are in super slow motion, hydrogen bonds begin to form between the molecules. These bonds act like glue and freeze the molecules into place. The freezing point is the temperature at which a liquid is converted into a solid. 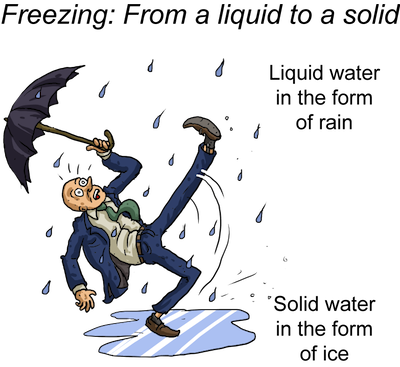 In the case of water vapor, hydrogen bonds start to form. As the hydrogen bonds form, thermal energy is released and the gas molecules become liquid molecules. This whole process is called condensation, which is the opposite of vaporization.

Picture a nice refreshing can of your favorite soda (or pop, if you prefer). Let's make it more refreshing by putting it in the refrigerator for a few hours. Who doesn't love a nice cool glass of cola! It's time to retrieve the can. Do you notice how it appears to be "sweating"? No, the aluminum can has not developed human-like sweat pores. Water has condensed on the cooler surface of the aluminum can. Chemistry in action.

No, we're not talking about that fancy lawyer deposition stuff—we're talking about chemical deposition. When water vapor comes in contact with cold glass, such as a window in the winter, it forms a solid deposit that we call frost. The gaseous water molecules are deposited onto the glass as solid water molecules without first becoming a liquid. This process is the opposite of sublimation. Who needs the law when you can have science?

Are you a total science lover like us? If so you'll love this website that will keep you up to date with all the latest science news.