When we first met alkanes early in this chapter, we learned that they could be thought of as the things that the more reactive portions (functional groups) of the molecule are attached to. Think of this in terms of a Christmas tree. The tree itself is standard and pretty boring (non-reactive). Once we start adding ornaments, however, there is no telling how wild and crazy (reactive) the Christmas tree can get.

Functional groups are where the magic takes place. These are the atoms involved in all the wheeling and dealing that causes electrons to shift around and for reactions to take place. Let's check them out them in more detail.

Halogens are our friends from group 7 in the periodic table: fluorine (F), chlorine (Cl), bromine (Br), and iodine (I). Halogens are common functional groups for alkanes, and can be used in reactions to reduce an alkene into an alkane. 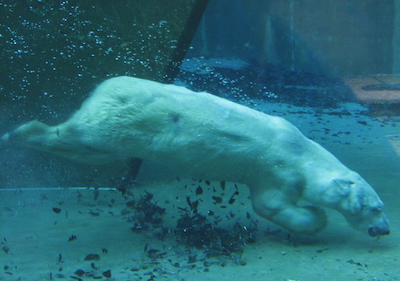 Both polar bears and polar alcohols are able to mix with water through hydrogen bonding.

Alcohols are not above the naming rules, and they introduce us to the suffix -ol.

The above alcohol goes by the name propanol.

This alcohol goes by the name 1,2 butanol (with the 1 and 2 indicating the carbons the hydroxyl is attached to).

Alkenes introduced us to the double bond. Double bonds are not exclusive to carbon atoms, however, as the carbonyl group, C=O, shows us. Carbonyl groups look similar to the hydroxyl groups found in alcohols, except they have a double bond with the oxygen.

Naming ketones is beyond the scope of this chapter, but, to satisfy curiosity, this ketone is known as 2-butanone. 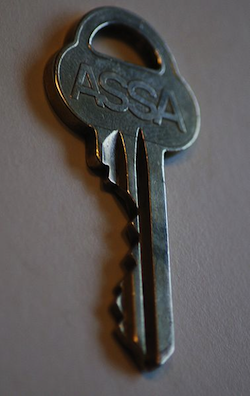 The magic key that will let a carbonyl group into a hydrocarbon.

The presence of an oxygen atom in a ketone group allows the hydrocarbon to participate in the hydrogen bonding party.

Aldehydes are the first cousin of ketones. They also contain a carbonyl group, however this group is always found at the ends of the carbon chain, never inside of it. No key needed.

If Aldehydes lived in New Orleans, their carbonyl group, which leads the hydrocarbon chain, could also be the Grand Marshall of the Mardi Gras parade. 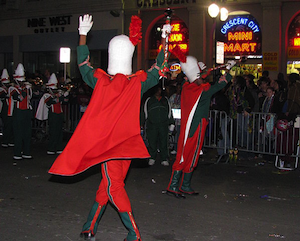 Both Aldehydes and Grand Marshalls are leaders of hydrocarbons and marching bands, respectively.
Image from here.

Naming aldehydes is beyond the scope of this chapter, but, to satisfy curiosity, this aldehyde is known as propanal.

Also, The presence of an oxygen atom in an aldehyde group is another way for hydrocarbons to attend the hydrogen bonding party.

We've seen double bonds, we've seen alcohols, and we've seen carbonyl groups. What happens when we see them all at the same time?

Carboxylic acids happen, that's what. These contain the carboxyl (not to be confused with the carbonyl group discussed above) functional group: -COOH.

This carboxylic acid has the proper name of ethanoic acid. However, it received fame and fortune under its stage name: vinegar.

The presence of a carboxylic acid on a hydrocarbon chain provides two oxygen atoms that can now participate in reactions. The majority of these reactions are only covered in upper level chemistry courses, but one, the infamous hydrogen bonding, is relevant to this chapter.

What happens if the carboxyl group adds oxygen and it moves inside the carbon chain? We get esters.

Naming is getting complicated. Good thing naming esters is beyond the scope of this chapter. For the record, this ester goes by the name methyl ethanoate.

What combination is left? Ethers, lovers of oxygen linkages.

Naming is really getting complicated now. Naming ethers is beyond the scope of this chapter, however, this ether goes by the name diethyl ether.

One more guest for the hydrogen bonding party.

So many hydrocarbons, such little time. A quick breakdown on how they are all related.