Large and in Charge

Organic chemistry and biology overlap often, with one of the best examples being macromolecules. Macromolecules are very large hydrocarbons containing functional groups and additional elements, such as nitrogen and phosphorus.

Before humans knew what macromolecules were, Aristotle summed them up perfectly when he said, "The whole is greater than the sum of its parts." What exactly, did he mean by this?

Macromolecules are composed of base units, known as monomers. Many monomers come together to form polymers (try saying that three times fast).

To illustrate this idea of monomers becoming polymers, take the case of the Olympic rings. This red ring (a monomer) seems a bit insignificant on its own:

However, once this red ring monomer combines with other monomers to make a larger polymer, things start to looks more functional and put together: 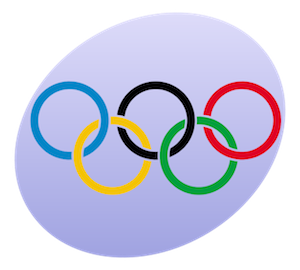 The four main macromolecules are:

Proteins are composed of Amino Acids. We can see some functional groups we discussed earlier in this chapter in the picture of an amino acid below: 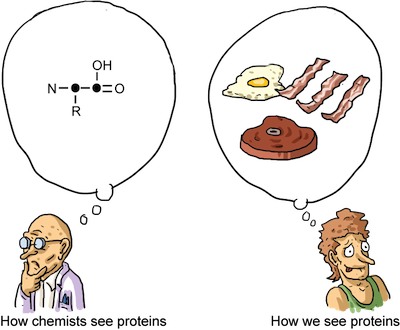 The "R" represents an unknown hydrocarbon. The "R" chain can be any hydrocarbon. What is important to amino acid structures is the amine group, or Nitrogen, on one end and the carboxylic acid functional group on the other. These functional groups react with each other and allow for amino acids to link together in a long chain, turning them into proteins.

Proteins are vital to biological functions. Proteins were likely discussed in your biology classes under the aliases of "enzymes." Proteins also hold your skin cells together, allow your muscles to move, and help keep your immune response strong.

Where would we be without sugar? These tasty molecules that sweeten our lives are known in scientific circles as monosaccharaides. Similar to amino acids and proteins, monosaccharaides link together in long chains to form carbohydrates. 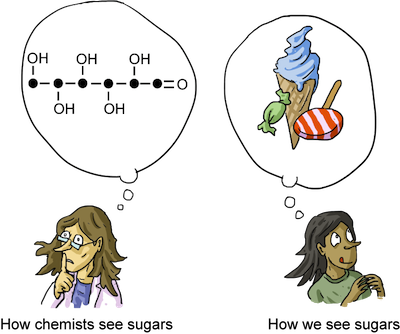 Each carbon in a monosaccharide has a functional group attached it, allowing for participation in numerous chemical reactions. Additionally, the four internal carbons that contain a hydroxyl group are chiral, which allows monosaccharaides to have many isomers. 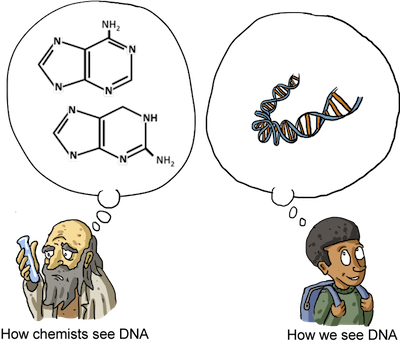 Nucleotides are made up of a nitrogenous base (two examples are shown above) that connects to a pentose sugar and a phosphate group. Nucleotides are linked together in long chains (DNA and RNA) and contain all the genetic information of the organisms they reside in.

DNA almost has the same combination as a rock band. We have the nitrogenous base guitar, the pentose sugar drum set, and the phosphate group keyboard.

Together, they combine to form a nucleic acid band (functional group/monomer). When they join forces with several other bands, we get a music festival (macromolecule). Rock on. 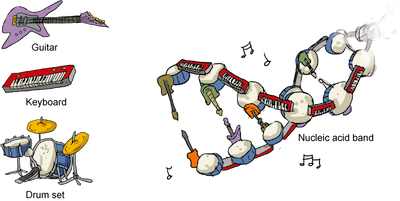 In today's health conscious society, fats get a bad rap, even though they are the molecules that yield the largest quantities of energy, or ATP. 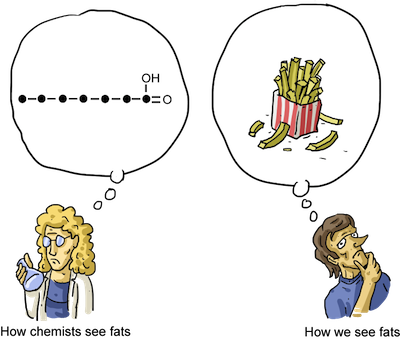 Nature may be superstitious, since most naturally occurring fatty acids have a chain of an even number of carbon atoms.