Grab your cameras. Raise the flags. Play "Hail to the Chief." The first family of the periodic table has arrived. That's right, folks, please extend a warm welcome to the alkali metal family.

The first column of the periodic table is called group one. It also happens to be called the alkali metal family. The members of this prestigious family are lithium (Li), sodium (Na), potassium (K), rubidium (Rb), cesium (Cs), and francium (Fr). Hydrogen (H) is technically in the same group, although it really doesn't exhibit the same behavior as the true alkali metals. By the way, they're called alkali metals because they easily form compounds that dissolve in water to give basic (or alkaline) solutions.

Why do students love to learn about alkali metals?

Because they're so basic.

This group lies in the s-block of the periodic table, which we already learned means the elements have their single outermost electron in an s orbital. Here are a few alkali metal electron configurations:

As you might have guessed, these elements would just love to get rid of that single electron to achieve a very stable noble gas configuration. For this reason, these elements are extremely reactive. They are not readily found in nature in their elemental form (for example pure Na or pure K). Instead they readily lose their lone valence electron to form an ionic bond with other elements. In other words, nature is filled with salts containing alkali metals with a positive +1 charge. In fact, your dinner table is filled with an alkali metal. Table salt is formally known as NaCl with the Na having a +1 charge and the chloride having a -1 charge.

We already mentioned the group one family members are extremely reactive. In fact, they're so reactive that in their elemental form they must be stored under oil in a well-sealed container. The oil prevents the metals from reacting with oxygen and water found in air. Check out the reaction of sodium (Na) and water below.

When alkali metals come in contact with water, metal hydroxides (M-OH) and hydrogen gas are made. This technically isn't a problem…except the reaction is highly exothermic, which means it produces a lot of heat. What happens when hydrogen gas mixes with heat? Check it out here. Can't get enough? Check this out, too.
Physically, the alkali metals are mostly silver-colored, soft, and have low densities. They also have low electronegativity and low ionization energy. These metals would much rather lose an electron to achieve a full octet, rather than gain an extra electron. Alkali metals are the Oprah of the elements, and there favorite thing is giving away electrons. 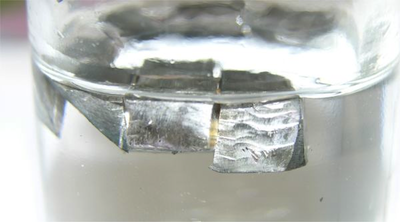 Knowing what we know about alkali metals, how do we think they will react with halides? Or will they even react at all? We know alkali metals are itching to lose their ns1 electron, while the halide elements are starving for an extra electron to fill their np5 orbital. Seems like a match made in chemistry heaven. Ah, young love.

One of our favorite alkali metals is sodium. Its chemical symbol is Na, derived from the Latin name natrium. Na is in the second period with an atomic number of 11. You might be surprised to know it's the sixth most abundant element in the earth's crust. Truth be told, we don't just love the element sodium—we need it. Sodium regulates blood pressure and volume, and helps balance the pH of our bodies.3

Our second favorite alkali metal is potassium. (Although it's hard to choose, isn't it?) It's another one of those oddball elements whose chemical symbol, K, is derived from its Latin name (kalium). Its atomic number is 19, and it emits a violet flame when burned. By the way, determining elemental identity by flame color is called the flame test. A lot of metals emit unique colors when burned. How cool is that? Burning things for the sake of science.

If our bodies were taken apart, broken down, and separated into one large elemental pile, potassium would compose 0.2% of the mass of the human sludge. That makes it the eighth most common element by mass in our bodies. We need a lot of potassium to regulate brain functions and participate in lots of other biological events going on in our bodies.4 Banana, anyone?

Why do chemistry presentations sound so much better in a British accent? For a quick review about all things alkali, click here. Or if you have some extra time on your hands check out this lengthier but oddly entertaining alkali metal elements of love dating series (part one and part two).