Gases Are So Noble

We've navigated through the s-block. We've trekked through the d-block. And now we've reached the last column of the p-block. Welcome to the noble gases.

There are six gaseous elements located in group 8A (or group 18) of the periodic table: helium (He), neon (Ne), argon (Ar), krypton (Kr), xenon (Xe), and radon (Rn). Collectively these gases are known as the noble gases. These gases are not heir to the throne nor are they superior in morals. The noble part of their name actually arises from the German word edelgas, which means unreactive.

We've mentioned a gazillion times that other elements strive to achieve the stability of the noble gases, but where does this stability come from? Electrons. The valence electron configurations of these stable elements are: ns2np6, where n is the period in which the gas resides. Two completely filled orbitals means ultimate stability. Yoda would be proud. 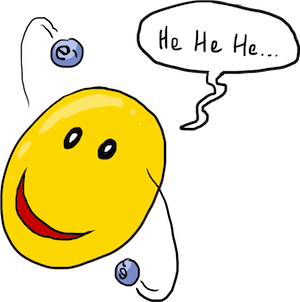 The noble gases are happy with their completely filled valence shells.

Because of their uber-high stability, the noble gases are relatively unreactive. They have very high ionization energies and negligible electronegativities because they have no desire to gain or lose an electron.
One noble gas that exhibits some degree of reactivity is Xenon (Xe, Z = 54). While most xenon is found as pure Xe, it can form complexes like XeF6, XeF4, XeO3, and XePtF6. Xenon was first called "the stranger" because it was the last noble gas to be isolated and characterized. It is an odorless, colorless gas, but when it is put in a vacuum tube and excited with electricity it glows blue.

Xenon glows blue when put in a vacuum tube and electricized. See an example here.

One group 18 element we're all familiar with is helium (He, Z = 2). Stores use helium to fill up their balloons because it is less dense than air, which means it rises without being pushed. What fun would a balloon be if it just laid on the floor?

Helium is the second most abundant element in the universe and was discovered on the sun before it was found on Earth. Weird, we know. It, along with neon (Ne), is one of two elements that have never been observed to bond with another element in a compound. Talk about not playing well with others. That's what we like to call unreactive.

Speaking of neon (Ne, Z = 10), it's another element that we are all quite familiar with. It's lightweight, colorless, and glows a reddish-orange in a vacuum tube. Those bright shiny signs we see on businesses everywhere are made possible by neon.

Check out this interesting and short read about the case of the missing Xenon.