The Hitchhiker's Guide to the Periodic Table 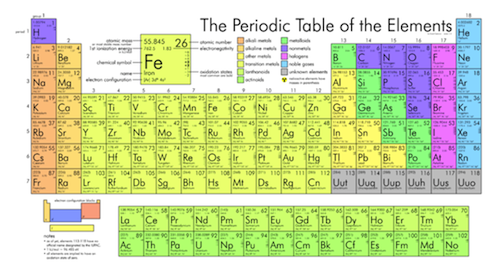 Take a good, long look at the periodic table, Mendeleev's favorite creation. Seriously. Check out the colors, the rows, the columns, and the symbols. Have you ever wondered why the table is the way that it is? What was good ol' Dmitri thinking when he put certain elements in one row and other elements in a different one? At first it may seem like a random mess of numbers and letters, but there is, indeed, a method to the madness. In fact, we might say it's elementary, my dear Watson.

It's human nature to organize things. Librarians organize books. Cooks organize their kitchens. Who hasn't spent time organizing their Skittles to accurately reflect the rainbow? Chemists are no different than the rest of us. Okay, maybe they're a little different.

The periodic table is the tool chemists have concocted to organize all of the elements, which are substances (like carbon or hydrogen) that cannot decompose into simpler substances. You may have noticed the periodic table looks like a big rectangular-ish grid. Each element has its own cheat sheet of chemical information found in a specific place within the grid.

Don't be worried if the periodic table you're used to doesn't look exactly like the one above. Each periodic table is unique. Some contain more information, some less. If the bells and whistles of a fancy table don't appeal to you, stick to a more basic table like this one here.

Let's take a closer look at an individual periodic table box. Pick your favorite element. Cobalt, you say? It wouldn't have been our first choice, but if you insist. (Just kidding. We love all the elements equally.)

One piece of information found in every periodic table is the atomic number (located in the upper-right corner in the example above). This value, unique to each element, indicates the number of protons present in the nucleus of an atom. For cobalt, the atomic number is 27 because all cobalt atoms have 27 protons. Clever, is it not?

All periodic tables also contain the chemical symbols for each element. These symbols are simple two-letter abbreviations of the elements' names. For many an element, the symbol is just the first two letters of its name, such as Co for cobalt. For other elements, the symbols are not as obvious. Mercury's chemical symbol, for example, is Hg. In case you're curious, Hg is derived from the Latin word "hydrargyrum," which means "liquid silver." Very fitting if you ask us.

One final piece of information found in the elemental box of most periodic tables is the atomic weight. As the name suggests, this is the mass of a single atom of the element. This information is very useful when solving all kinds of chemistry problems on exams and quizzes.

The elements are placed in specific locations on the periodic table grid according to the way they look and act. This creates patterns in the table called periodicity (more on that later). Within the grid, there are rows and columns that help organize elements with similar properties together. So there was a method to Mendeleev's madness. 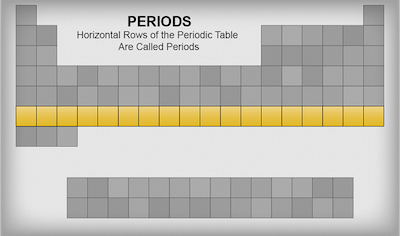 Horizontal rows of the periodic table are called periods.

Horizontal rows of the periodic table are called periods. Even though some boxes appear to be missing, all of the rows go left to right, skipping over any blank areas. Every element in the same period has the same number of atomic orbitals. These orbitals (s, p, d, and f) are the area around an atom where its electrons are most likely to be found.

The elements of the first row of the periodic table (the single, isolated squares in the upper-left and upper-right corners) have a 1s orbital available for their electrons to sit in—all comfy and cozy. The elements of the second row of the periodic table—which is cleverly called the second period—have one 1s and three 1p orbitals available for their valence electrons. These are the electrons located in the last shell or energy level of an atom. The fifth period elements have one 5s, three 5p, and five 5d orbitals available.

Vertical columns in the periodic table are called groups (or families). 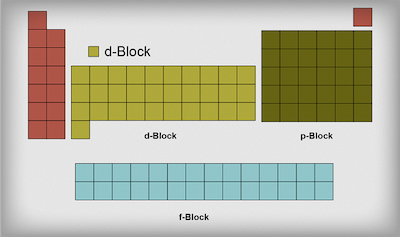 To further complicate your studies, the periodic table is also broken into four blocks. Check out the table above. Seriously, check it out. We'll wait.

The first two columns (shown in red) comprise the s-block. The next 10 columns (shown in yellow) comprise the d-block. We'll let you use your super powers of deduction to determine the location of the p-block and the f-block. The highest-energy electrons of each element in a block belong to the same atomic orbital type. In other words, elements in the s-block have their highest energy electrons in an s orbital, while elements in the d-block have their highest energy electrons in a d-orbital.

Main-group elements and transition elements of the periodic table.

Did you ever think one table could be split into so many classifications? Well, we're not done yet. Our favorite table can also be broadly divided into main-group elements and transition elements (or transition metals). The main-group elements are shown in red in the table above, and their properties are easily predictable based on their position in the periodic table. The transition elements are shown in yellow, and their properties are not as easily predictable.

The elements of the periodic table can also be classified into metals, nonmetals, and metalloids. We'll get into the nitty-gritty details of each column in the next few sections, but let's ease our way into this adventure for now.

Metals occupy the left side of the periodic table. Check out the boxes shaded in those warm yellow and orange shades in the table above. Don't forget the two long rows at the bottom, either. Boom. Metals.

These guys are good conductors of heat and electricity, which is a fancy way of saying heat or electrons can easily flow through a chunk of metal. Another term usually thrown around when talking about metals is malleability, which means metals can be pounded into flat sheets or different shapes. Good examples of metals that we're all familiar with are iron (Fe), silver (Ag), and sodium (Na).

On the right side of the periodic table are the cleverly named nonmetals, resplendent in their blues, pinks, and purples above. These elements have properties that are more varied than their metallic cousins. Some are solids at room temperature, such as carbon (C), while others, such as helium (He) and oxygen (O), are gases. Nonmetals tend to be poor conductors of heat and electricity.

The elements situated in that funky zigzag are called metalloids. They are shaded green in the periodic table above. These elements are neither metals nor nonmetals, but they do share some properties with both groups. For example, metalloids can conduct electricity like metals. Silicon (Si) is a super example of a metalloid element. 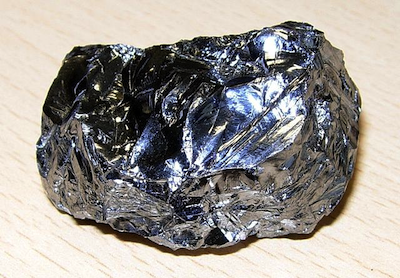 Silicon (Si) is a metalloid. Image from here.

We won't go into specific details about the f-block in this module, but it is important for you to know that there are two types of compounds located here. The first row of the f-block contains the lanthanides. The second row houses the actinides.

The only letter that does not appear anywhere on the periodic table is J.