Colligative Properties are the properties of a solution that depend on the numberof particles in solution. These properties don't care what solutes are in the solution, only how many of them there are. It seems simple enough, right? Be careful, it can get confusing. Remember a single molecule of NaCl dissolved in water dissociates into two ions in solution. There are four important colligative properties of solutions that we will discuss: vapor pressure depression, boiling point elevation, freezing point depression, and osmotic pressure.

Vapor pressure is the pressure exerted by a vapor that is in equilibrium with its liquid. Picture a sealed two-liter of your favorite drink. The liquid will evaporate until the rate of evaporation is equal to the rate of condensation. The liquid continues to evaporate until the rate at which liquid molecules are turning into gas molecules is equal to the rate at which gas molecules are turning into liquid molecules. When this point is reached there is a pressure of vapor or gas present in the bottle above the liquid.

How is this a colligative property you? Well, the presence of a solute in a solution decreases the value of the vapor pressure. Think about it. Solvent molecules escape into the gas phase at the surface of a solution. If solute molecules are present, the solvent has much more difficulty escaping the liquid phase. The solute molecules are acting as solution jail guards. The more of them present, the less likely the solvent can escape into the gas phase. We wonder how Johnny Cash would feel about that. 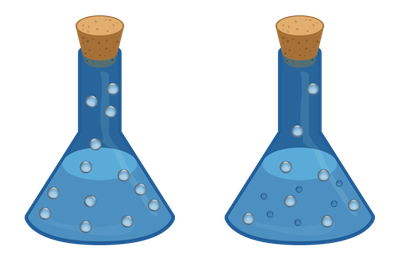 This picture shows adding a solute to a solution lowers the vapor pressure, the pressure of gas above the liquid.

Raoult's Law is the law that describes the relationship between solute and vapor pressure.

What happens if the solute is also a liquid? In cases where the solute is a volatile liquid and contributes to the overall vapor pressure of the solution, a second version of Raoult's law is used:

The magnitude of this phenomenon is proportional to the number of solute particles present, hence why this is found in the colligative properties section. Here is the equation we have been waiting for:

where ΔT is the amount that the boiling point was elevated, kb is the molal boiling point elevation constant, m is the molality of the solute, and i is the van't Hoff factor. The i factor is the number of particles into which the added solute dissolves. For NaCl this value would be two, for one Na+ and one Cl-. The kb constant is unique to each solvent and will always be provided in questions that want you to determine ΔT. See? Test makers are not as evil as you think.

Just like the boiling point, the freezing point is also affected when a solute is added to a solvent. Specifically, the addition of a solute lowers, or depresses, the freezing point. That's why we throw salt on the sidewalk to prevent the formation of ice. Although not all ice is bad, right?

Most substances in their solid frozen state assume a regular crystalline arrangement just like a beautiful snowflake. When solutes, or impurities, are added the solid-state lattices are altered and weakened. As a consequence the temperature must be lowered even further to form a solid. The freezing point depression is given by the following equation:

where ΔT is the amount that the freezing point was depressed, kf is the molal freezing point elevation constant, m is the molality of the solute, and i is the van't Hoff factor. Once again, you do not have to memorize tables and tables of kf values. They will be generously provided.

We must be butter, because we're on a roll. There's only one more colligative property to cover. Drum roll, please—welcome to osmotic pressure. Picture a hollow cylinder composed of two chambers, A and B. Chamber A is filled with pure water. Chamber B contains an aqueous solution (like water and a solute). The chambers are separated by a semipermeable membrane, which is fancy way of saying some particles can go through the membrane, while others cannot. In this example let's say the super snobby membrane only allows water to pass through. The solute particles, however, cannot pass through the membrane.

Water will flow from Chamber A into Chamber B by a process called osmosis. The amount of solution in Chamber B will increase over time and the solution will become increasingly dilute. At the same time, the amount of water in Chamber A will decrease. As water passes into Chamber B the hydrostatic pressure (the pressure exerted by a fluid when it is at rest) of the solution increases. When does the madness end? Equilibrium is reached and the process stops when the hydrostatic pressure is sufficient to halt osmosis.

Osmotic pressure (Π) is the least amount of pressure needed to stop osmosis, that is, to prevent the passing of solvent molecules into the solution. The equation for osmotic pressure is:

where Π is the osmotic pressure in atm, M is the molarity of the solute, R, is the universal gas constant, T is the temperature of the system in Kelvin, and I is the van't Hoff factor.

Chemistry is awesome.
Previous Next
More on Solids, Liquids, and Gases Navigation