Solids have both a fixed volume and shape. The particles remain locked in place, moving only slightly around their positions. In fact, solids (and liquids) are often referred to as condensed phases because the particles are so close together. There are many types of interactions between the particles in solids and these interactions are typically strong, we're talking Chuck Norris strong. The compressibility (or measure of how much the volume of a substance changes with pressure) of solids is close to zero. Don't believe us? Try squeezing a penny into a smaller form. We'll time you. Ready, Set, Go.

There are generally two types of solids: amorphous solids and crystalline solids. There is no extended order in the structure of an amorphous solid; they are true rule breakers, like Miley Cyrus. That girl just can't be tamed. Picture a piece of glass. With our eyes it looks uniform in structure, but looks are deceiving. There is not a regular pattern to the structure of glass on the microscopic level. If you try to melt an amorphous solid you will not get a sharp melting point, because the interactions between individual particles are all of different strength.

Crystalline solids (or crystals), on the other hand, are the role models of the solid state because they are strict rule followers. They have extended order in their structure, which means under a microscope each piece of a crystal looks the same. Because of this order, crystals have a specific three-dimensional geometrical structure often observable to the naked eye. Think rock candy. 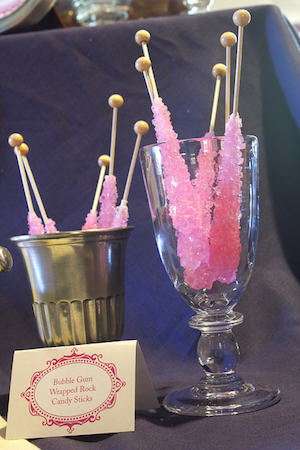 Chemistry is so delicious. Image from here.

The melting points of crystalline solids are extremely sharp, because the interactions between particles are all the same. In other words, heating to the melting point breaks all of the bonds at the same time, just like magic. Crystals are typically stronger than their amorphous counter parts because they work out. No, not really. It's because the uniformity of their structure makes them more rigid and consequently, stronger.

Crystals are made up of regular repeating patterns called the crystal lattice. It's like the solid-state version of Groundhog Day, it just goes on and on. The most basic repeating unit is called the unit cell. The lattice points of a crystal connect unit cells together to form the whole structure. These points are also the positions where we find atoms, ions, or molecules. How do we repeat the unit cell in order to form the overall lattice? We do so by a process called translation, which is just a simple shift or slide of the unit to a different position.

Below is the unit cell of magnesium sulfide, MgS. We know it's the unit cell because there are no other smaller repeating units. The spheres represent where the Mg and S atoms sit. Connecting a bunch of these units together makes a crystal of MgS. 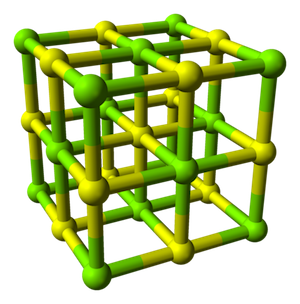 Example of a crystal unit cell. 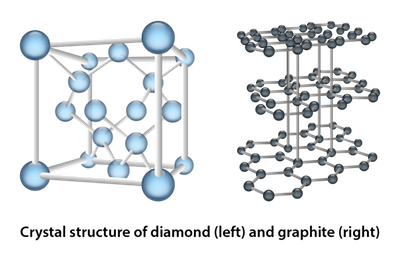 Are you hungry? Here's some food for thought. Is carbon hard or soft? Both diamonds and graphite are made of carbon and only carbon. Diamonds are one of the hardest substances known to man, but graphite breaks super easily. Be honest, how many times have you broken the graphite in your favorite number 2 pencil? So what gives? Check out the crystal structure of a diamond and graphite above.

The particles in ionic crystals are held together by electrostatic forces (the attractive and repulsive forces between charge particles). These forces are typically really strong. We're talking The Hulk strong, which makes ionic crystals hard, high-melting, and brittle. A common crystal of this type that we're all familiar with is sodium chloride (NaCl) or table salt. Each Na and Cl atom occupies a lattice point, and there are ionic bonds between all atoms.

Two- and three-dimensional representation of the NaCl crystal structure.

A molecular crystal is one in which there are recognizable molecules in the structure that are held together by non-covalent interactions. Say what? In a nutshell, these crystals are just large collections of really organized molecules. The interactions holding the crystal together are pretty weak so the crystals are soft and low melting. Sugar (sucrose) and snowflakes are probably the most common molecular crystals.

Sick of solids yet? Hang in there, we're almost done. The last example is metallic crystals. In these solids individual metal atoms sit on lattice sites and the atom's valence electrons flow freely around the lattice. These valence electrons act as a glue that holds together the positively charged ion cores of the metal atoms. Metallic crystals normally have high melting points and densities.

During the Manhattan Project in 1944, 26 men accidentally ingested a large portion of the world's plutonium supply. Plutonium, like other heavy metals, passes right through your digestive tract. Don't ask how they recovered all that plutonium.1