When you hear the word solution what do you think about? The first thing that probably comes to mind is that math quiz on Friday. Or perhaps you thought of a solid like salt or sugar that is completely dissolved in a liquid like water. This is a great example, but the world of solutions is actually much more impressive. A solution can also be made of two or more liquids, two or more gases, liquids and gases, and theoretically even two solids. So what exactly is a solution then?

Solutions are homogeneous mixtures. They consist of two or more components mixed in a single phase. That phase does not have to be a liquid. It can also be a solid or a gas or any other phase. Why is it important to understand solutions? Because the majority of chemistry occurs in liquid solutions, including most chemistry going on in your own body.

Hold on to your goggles. We're going to walk though the exciting steps of making a typical solution. Start with a simple substance that is soluble (meaning that it will dissolve) in water, such as salt. Pour the salt into the water and stir until it all dissolves. We call the salt the solute and the water is the solvent. We can also call this an aqueous solution because the solvent is water. 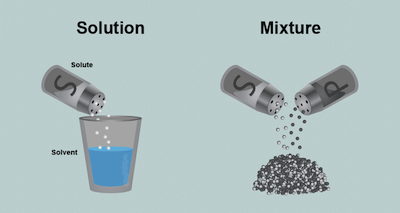 What happens if we make a solution out of two liquids instead of a liquid and a solid? The liquid that is in the largest quantity is called the solvent, while the other liquid is the solute. If you keep on adding more liquid solute until its quantity becomes greater than the other liquid it will then have the great distinction of being called the solvent. It's the same with a solid-solid solution, like a lovey salt and pepper mix.

The solubility (the quantity of a substance that can dissolve in a solvent) of a substance can be altered by changing the pressure or temperature of the solution. As the temperature of a solution increases the solubility of most solutes in a solvent increases as well. Likewise, higher pressure increases solubility. You have most likely witnessed this in action first hand. Soda, pop, coke, or whatever you choose to call it is carbonated by putting a high pressure of CO2 in the sealed bottle of liquid. As soon as the bottle is opened, the pressure of CO2 is decreased. If that bottle is allowed to sit for an extended period of time the amount of CO2 dissolved in the drink is low. Flat soda is soda that is seriously lacking CO2, and it is nasty.

Have you ever tried mixing oil and water? If you have, you probably quickly discovered that oil is not soluble in water. Instead the two liquids form two separate layers. Why do some things dissolve in water and some do not? The answer, friends, is "like dissolves like." 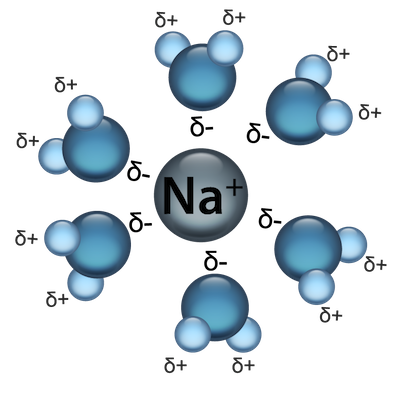 There are a few terms you must learn about if you want to be an expert on solutions. And who doesn't, really? There are three terms used to describe a solution's measurement of concentration: molarity, molality, and mole fraction.

Molarity, M, is probably the most common unit of measurement for solution concentration. Molarity is calculated by dividing the number of moles of the solute by the number of liters of solution.

Molality (not Molarity), m, is calculated by dividing the number of moles of the solute by the mass (in kg) of the solvent. A common mistake is to use a mass in g or lb not in kg. Be careful.

The mole fraction, X, of a solution is the number of moles of a substance divided by the total moles of the solution. Just in case you were wondering, mole fraction has nothing to do with our furry friends, the mole.