Mr. Charrington is an old widower with a cockney accent who keeps a secondhand store in the Prole district. He sells Winston the journal he starts in Book One, and rents out the room atop that same store to Winston and Julia in Book Two. Kind and amiable, Mr. Charrington shares Winston’s interest in the past, and chats with him about antiques and other remnants. Mr. Charrington shares with Winston his knowledge about certain items, but never asks any questions. 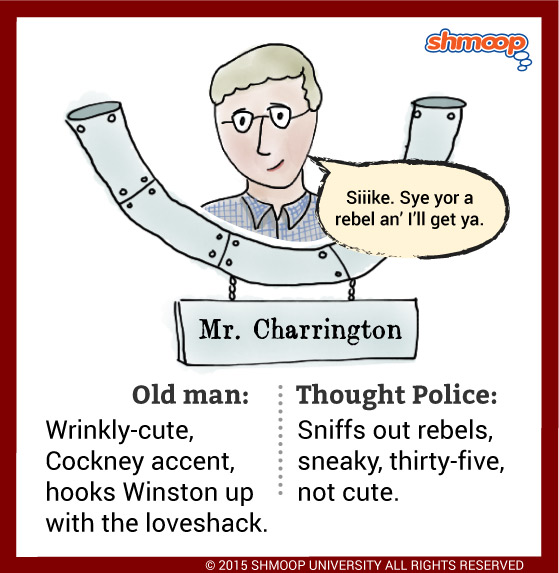 But alas! As you might have discovered by now, Mr. Charrington is not as he seems. Cold, alert, and about thirty-five years of age (as opposed to the jovial, 60-year-old, wrinkly, bushy-eyebrowed, bespectacled widower Winston thought him to be), he is actually a member of the Thought Police. The dude is basically an undercover agent for the Party whose job is to sniff out subversive citizens.

What’s the point of Mr. Charrington? He illustrates the ‘"just when you thought you were safe" mantra we seem to have adopted since beginning 1984. He emphasizes the themes of betrayal, deception, and all around brutality that are woven through the text.