Benjamin (a donkey) in Animal Farm

Benjamin is "the oldest animal on the farm and the worst tempered. He seldom talked, and when he did, it was usually to make some cynical remark" (1.3). (Think Eeyore, but smarter.) 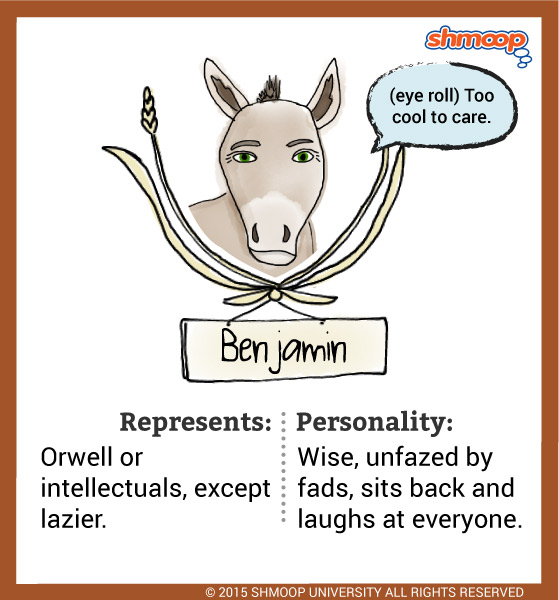 Despite his nasty temper, Benjamin knows what's up. After the rebellion, the other animals want to know what Benjamin thinks of the new organization of Animal Farm. The only thing that he'll say is, "Donkeys live a long time. None of you has ever seen a dead donkey" (3.4). Later, he rolls his eyes about everyone's windmill enthusiasm. Why? Again, because "donkeys live a long time" (6.17). You could say that Benjamin has long-term vision: unlike anyone else, he remembers the past and thinks about the future, so he doesn't bother getting worked up over what he sees as passing phases or fads.

We Can't All, and Some of Us Don't

Levelheaded, wise, and detached: Benjamin sounds like he'd be a great leader. But he's not. He just refuses to act, even if he thinks (or knows) that the animals are making a really dumb decision. We get the sense that he sees all actions (including his own) as pointless and thinks it's funny. When he realizes that the humans are going to blow up the windmill, the narrator tells us, "Slowly, and with an air of almost amusement, Benjamin nodded his long muzzle" (8.19). Part of Benjamin seems to enjoy the fact that the windmill is going to come crashing down.

But there's a price to all this hipster detachment. After Boxer is injured, you'd think that Benjamin could figure out that "We're going to take Boxer to a hospital" really means "We're going to send Boxer to the glue factory"—but he doesn't, or, if he does, he doesn't bother doing anything about. Only when Boxer is actually being taken away does Benjamin come running to alert the other animals; "it was the first time that they had ever seen Benjamin excited—indeed it was the first time that anyone had ever seen him gallop" (9.16).

Boxer's death doesn't exactly cheer up the old donkey. In fact, he's "more morose and taciturn than ever" (10.2). When the other animals want to know whether things were better before or after the rebellion, he replies with a characteristically cynical answer, "things never had been, nor ever could be much better or much worse—hunger, hardship, and disappointment being, so he said, the unalterable law of life" (10.6). Does Benjamin blame himself? Does he think that if he'd spoken up sooner, none of this would have happened?

Maybe—especially if you think (like Morris Dickinson) that Benjamin has a touch of Orwell in him. We'd buy it: he's definitely got the philosophical and distant air that Orwell's narrator adopts. But there's a crucial difference. Orwell speaks out against the injustices he sees, instead of just letting them unfold for his own twisted sense of humor.