It's all Old Major's fault. (Well, you could also go with Mr. Jones.) But the rebellion started with Old Major. See, he had a dream—and he wants to tell everyone about it. (It's a good thing that all the animals respect Old Major, since usually conversations that start out "Let me tell you about this dream I have last night" send us running in the opposite direction.) 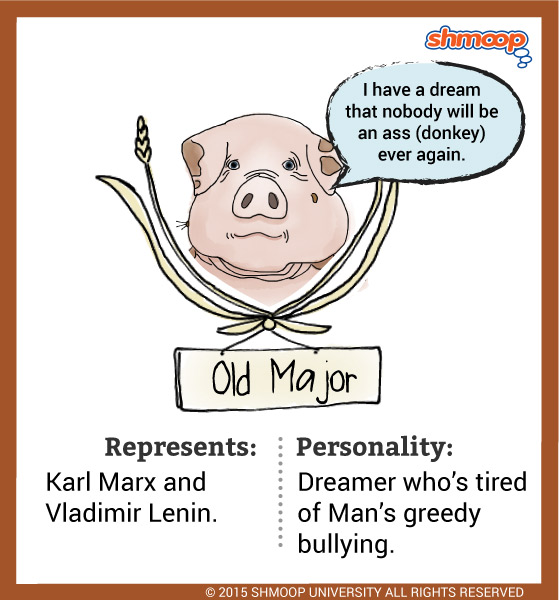 But Old Major's "strange dream" (1.2) doesn't involve anyone dressed in a fur cape driving a snowmobile (what, just us?). His dream is more like a message: animals don't actually have to live short, miserable lives. It's all Man's fault—Man, who's "the only creature that consumes without producing" (1.9). In other words, Man takes advantage of the animals by forcing them to work themselves to death, while he (Man) does nothing but boss them around. Yet when the animals produce goods—milk, eggs, fertilizers, or iPhones—Man reaps the benefits.

As Old Major says, "Is it not crystal clear, comrades, that all the evils of this life of ours spring from the tyranny of human beings?" (1.11). And he has a solution: if the animals overthrow Men and take control of the farm, everyone can live in a state of equality. 4EVA.

Old Major isn't just a pig, of course. He's also a… wait for it… symbol. He's meant to represent Karl Marx, one of the most famous philosophers and political theorists in the history of, well, the Western world, thanks to a little book called The Communist Manifesto. So, let's lay a little Marxism on you.

Marx opens his Manifesto by claiming that "The history of all hitherto existing society is the history of class struggles," i.e., you can explain everything in the history of the world as a result of struggle between classes. First we had feudalism—lords who owned land and the serfs who worked it. Now (and in 1848, when Marx was writing) we have capitalism: mostly the working class and the owner class—factory owners, business owners, Wall Street Tycoons, Donald Trump, and so on. Eventually, Marx said, "internal tensions" will destroy capitalism. The next economic stage will be a stateless (no countries), classless society, what he calls "the dictatorship of the proletariat" (working class).

But the only way out is through revolution. At the end of the Manifesto, Marx declares, "Let the ruling classes tremble at a Communistic revolution. The proletarians have nothing to lose but their chains. They have a world to win. Workers of the world, Unite!"

You can probably see the parallels: in Animal Farm, the animals are the proletariat, the working class who are supposed to usher in the next stage of history. The humans represent the capitalists, who take advantage of the working class and keep the benefits of their labor for themselves. But as soon as they get the chance, the pigs start sucking up all those benefits for themselves.

The same thing happened in 1917, with the Russian Revolution. Even if the Revolution started out with good intentions, it quickly turned into an oppressive, possibly fascist regime. Like Karl Marx, Old Major has a revolutionary, idealistic message. This pigs may venerate his skull—but they're pretty quick to ruin his legacy.