Snowball (a pig) in Animal Farm 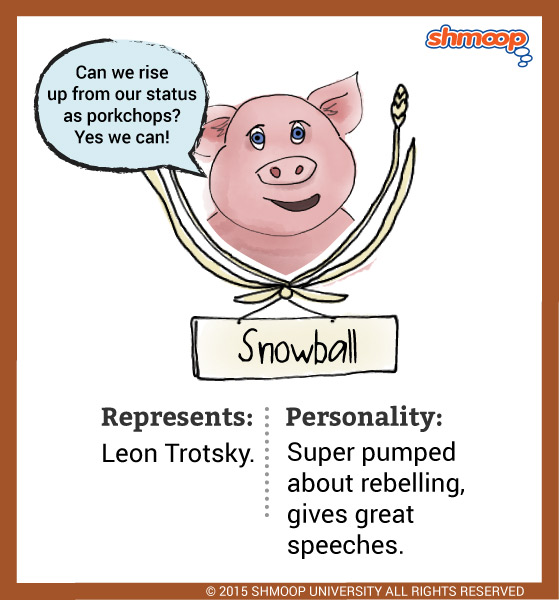 We meet Snowball when the pigs decide to spread Old Major's message through the farm. He's "a more vivacious pig than Napoleon, quicker in speech and more inventive, but was not considered to have the same depth of character" (2.2). In other words, the animals are fooled by Snowball's appearance: because he's friendly and lively, they assume that he's a ditz. (Moral: just because the cheerleader is blonde and friendly doesn't mean she's less interesting than the brooding emo poet. She might even be more interesting.)

After Napoleon's dogs chase off Snowball, you might feel a little sorry for the pig. You might even start to think of him as a great and noble hero. Unfortunately, you're probably wrong. Sure, Snowball took an active part in the rebellion and helped set up the Seven Commandments, but he also reduced the commandments to the simplistic line "four legs good, two legs bad" (3.9).

Easy to remember? Yes. But it's also kind of meaningless—and the sheep can be trained to bleat it over Snowball's speeches. Plus, when the other animals aren't too happy that the pigs take all the milk, Snowball insists that they need it for all their brainwork. He may not be around when the pigs turn Animal Farm into a dictatorship, but he goes along with the first steps before he gets elbowed out. If he'd hung around, who knows? Maybe he'd be the one getting drunk on Mr. Jones's whiskey.

After Snowball heads the victorious Battle of Cowshed, the honeymoon is over with him and Napoleon. We learn that Snowball is a much better public speaker, and that he "often won over the majority by his brilliant speeches, but Napoleon was better at canvassing support for himself in between times" (5.8). In other words, Snowball isn't bringing the game—or rather, Napoleon is playing a different game.

And then there's the issue of the Windmill. This is Snowball's pet project; he thinks it's vital to the future success of Animal Farm. Plus, Snowball wants the Rebellion to spread; he wants to send out "more and more pigeons to stir up rebellion among the animals on other farms" (5.12). Like Old Major, Snowball is kind of a dreamer: he imagines greater technical achievements on the farm and a revolution that can spread all the way across England. Not Napoleon. All Napoleon wants to do is consolidate the power he's already gained.

The problem is, Snowball isn't mean. He might be a little shady, but he's at heart an idealist. When he and Napoleon both make speeches to the crowd, Snowball is much more charismatic, and as he finishes, "there was no doubt as to which way the vote would go" (5.13).

But no one counted on the dogs. Napoleon lets out his private army, and they chase Snowball off the farm. Napoleon spreads lies and rumors, making Snowball into a symbol of the enemy within—the guy who only seems like he's on your side.

And all he wanted was a windmill. (And some milk.)

At first, Snowball seems like a dead ringer for Vladimir Lenin, the leader of the 1917 Russian Revolution. But he's really more like Leon Trotsky, Lenin's second-in-command. Let's look at the similarities:

Trotsky wanted to spread the Communist Revolution to the rest of the world. Hey, that's just what Snowball wants to do! But not Stalin / Napoleon: he wants to consolidate his power on Animal Farm.

Wondering what happens to Snowball after he disappears through hole in the hedge? Well, Trotsky ended up in Mexico, until, in 1940, Stalin send KGB agent Ramón Mercader to assassinate him. So, we have a pretty good idea of what's in store for poor Snowball.