Who Is John Galt?

Seriously, we really want to know who this guy is. We get lots of wacky theories about his identity (he's living in an undersea city! he discovered the fountain of youth!) before finally meeting the mystery man in Volume 3. But this is an almost absurdly long time to delay introducing the hero of the novel. Which leads us to a few questions: why is Galt's introduction delayed so long, why is he so mysterious, and can he really even be classed as the book's hero, since he's MIA most of the time?

Well, we can tackle that last one right now. Galt may be MIA, but his presence is strongly felt throughout the novel. He's actually driving most of the action, albeit mysteriously and behind the scenes like a Phantom of the Opera. And that's actually an apt comparison, given his relationship with Dagny. But more on that later. At any rate, Galt is a hero in this novel, but not in a traditional sense.

There's still a lot to try to figure out here, so we'll start by at least getting a handle on who this guy is, and then move on to the hows and whys of the character.

We get very little in terms of backstory for Galt. He has a tendency to disappear and then pop back up like a whack-a-mole. We know that he went to Patrick Henry University and was a bit of a superstar. Then he disappeared into the recesses of the Twentieth Century Motor Factory, invented some things of the world-saving variety, and then burst back up at a company meeting with his melodramatic declaration about stopping the world's motor – literally. And then he was gone again.

For a book that makes such a big deal about childhood and other formative past experiences, it's kind of odd that the book's supposed hero gets practically no backstory at all. We do get a very small tidbit from Hugh Akston, Galt's professor/father-figure, however:

"John, the self-made man, self-made in every sense, out of nowhere, penniless, parentless, tie-less. Actually, he was the son of a gas-station mechanic at some forsaken crossroads in Ohio, and he had left home at the age of twelve to make his own way – but I've always thought of him as if he had come into the world like Minerva, the goddess of wisdom, who sprang forth from Jupiter's head, fully grown and fully armed." (3.2.4.26)

That might not seem like a lot of information, but it raises some interesting points about Galt. First off, his childhood in a "forsaken crossroads" is linked to the running theme of "Starnesville," or dead-end, declining communities. Having escaped one of those, it's not surprising that Galt wanted to fight against ending up in another.

Secondly, Akston links Galt to the "Minerva myth." Minerva is the Roman name for the Greek goddess Athena, and Jupiter is the Roman name for Zeus. In mythology, Minerva sprang out of her dad's (Jupiter's) head as an adult. This isn't the first time that Galt has been tied to mythology. Two strangers tell Dagny that he discovered the lost city of Atlantis and the fountain of youth. And Francisco ties Galt to the Prometheus myth:

John Galt is Prometheus who changed his mind. After centuries of being torn by vultures in payment for having brought to men the fire of the gods, he broke his chains – and withdrew his fire – until the day when men withdrew their vultures. (2.5.1.266)

What's really interesting about this is that Francisco gets the Prometheus myth wrong. Prometheus stole fire and knowledge from the gods and gave it to people on earth. Zeus, the head-honcho god, punished Prometheus for his theft by chaining him to a rock and letting vultures come and pick out his liver every day. Yuck. Francisco makes it sound like "men" sent the vultures, though. So what gives? Well, over time the Prometheus myth had come to represent rebellious, anti-establishment ideas, with Zeus standing in for things like government, organized religion, parents, etc. So Francisco seems to be substituting powerful, oppressive humans for "Zeus" here.

So what's the deal with Galt's mythological connections? Well, this could be a way to emphasize his status as a living legend. In fact, for over half the book, characters like Dagny don't even think Galt is a real person. He's a totally mysterious figure, possibly a legend, possibly an actual person with legendary abilities.

The Inventor of the Motor

The heroic John Galt is linked with the theme of motors and the power of motion throughout the book. He invents fancy motors and he stops both metaphorical and literal ones with his strike, which effectively causes the whole country to fall apart – or at least helps the process along.

Yet we don't get tons of information about Galt's actions; we tend to get more about his ideas and views. This is a crucial point, and it's linked to Galt's lack of childhood backstory and his legendary status. See, Galt is all about the mind – people in this novel are defined by their views and their values. More than anyone else in the novel, Galt is defined by a philosophy, his own philosophy. So it seems that the narrative is reinforcing Galt's status as a heroic philosopher by characterizing him mainly by his philosophical ideas. It's no coincidence that Galt's major chapter is a super-long radio address where he outlines all his ideas about society. Galt basically is his philosophy.

This isn't to say that he just sits around writing long speeches and being philosophical, though. Galt's philosophy is about working hard and making decisions, so he behaves accordingly, practicing what he preaches. Galt is also largely defined by his strike and his motor, which are epic quests that are bigger than one person. His actions seem to transcend his own person at times.

In that radio address, Galt defines himself by referring to themes of motors, minds, and strikes:

"I have stopped your motor. I have deprived your world of man's mind. Men do not live by the mind, you say? I have withdrawn those who do....While you were dragging to your sacrificial altars the men of justice, of independence, of reason, of wealth, of self-esteem – I beat you to it. I reached them first....I showed them the way to live by another morality – mine. It is mine that they chose to follow." (3.7.1.113-114)

Since thought without action is useless in Galt's mind, he created Atlantis, powered by his miracle motor, as a way to express his social vision and values. The denizens of Atlantis, Galt's fellow strikers, seem to have a massive case of hero-worship and some serious man-crushes on Galt. Dagny also sees Galt in very heroic, legendary terms. He was her ideal before she even had a name and a face to put with him:

She thought: to find a feeling that would hold, as their sum, as their final expression, the purpose of all the things she loved on earth....To find a consciousness like her own, who would be the meaning of her world, as she would be of his....A man who existed only in her knowledge of her capacity for an emotion she had never felt, but would have given her life to experience. (1.8.2.14)

But, as with most things in this book, terms don't always mean what we think they do. Throughout the book, people like Galt, Hank, and Dagny insist that what seems heroic, joyful, and seemingly rare should be normal. The heroic should be commonplace, because everyone should be heroic. So in that sense, Dagny sees Galt as a normal (in her sense) dude. Which brings us to John Galt the everyday person.

This is a reference to Dr. Stadler's low assessment of his former student's achievements. Galt worked a dead-end job at Taggart Transcontinental for years as a way to express his beliefs and "strike" against society. (The man never does anything without some sort of philosophy to back it up. He probably has a philosophy of how to make an omelet.)

It would seem that there is very little about Galt that is not heroic or legendary. Even the discovery that he's the Mystery Worker to whom Eddie dished in the cafeteria does little to humanize or normalize him. We never get any of Galt's side of the conversation with Eddie. We have no idea what exactly he says to Eddie or how he speaks to him. Practically all the dialogue we get from Galt involves him speechifying about his values or professing his epic love for Dagny. The man just doesn't do small talk.

But all those ellipses (gaps) reveal something to us, though: Galt has a crush on Dagny. What could be more "normal" than that? Eddie is forever answering questions that Galt (his mystery friend) poses about Dagny. Galt basically spends ten years nursing a seriously bad case of lovesickness for her, bordering on creepy stalker behavior. Of course, he casts his love for Dagny in epic terms. But when you peel all the philosophy away, you're left with a guy with a really intense crush. It's almost pathetic, really. Galt spends years watching Dagny and waiting for her to notice he exists:

"Ten years of nights spent waiting to catch a glimpse of you, here, on the platforms, when you boarded a train....Whenever the order came down to couple your car, I'd know of it and wait, and see you come down the ramp, and wish you didn't walk so fast." (3.5.3.103)

He's like Ducky in Pretty in Pink here. Pathetic as this may be, Galt is still heroic, even with his super-bad crush. But he isn't perfect, and there's one last role he plays that is crucial to the narrative.

Before meeting Galt, Dagny swears to kill him. She calls him the destroyer and says he's ruining the whole world, taking all the brains (including her friends) away from her. It takes a crash course in Galt's philosophy for her to understand that the destroyer and her ideal true love are the same person. But Galt is definitely a destructive force, and his strike has a lot of nasty consequences that can't be totally ignored. People die as a result of industrial accidents that might have been avoided if competent people were still on the job. People are also desperate, poor, driven to criminal activity, and starving. The terrible government obviously has a lot of do with it, but it's important to note that Galt holds some responsibility. Ultimately, you could argue that Galt is good, bad, or a combination of both. 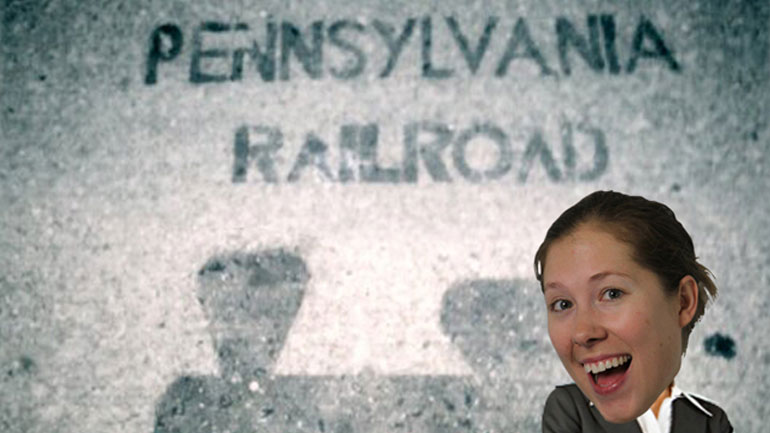