Max Vandenburg in The Book Thief 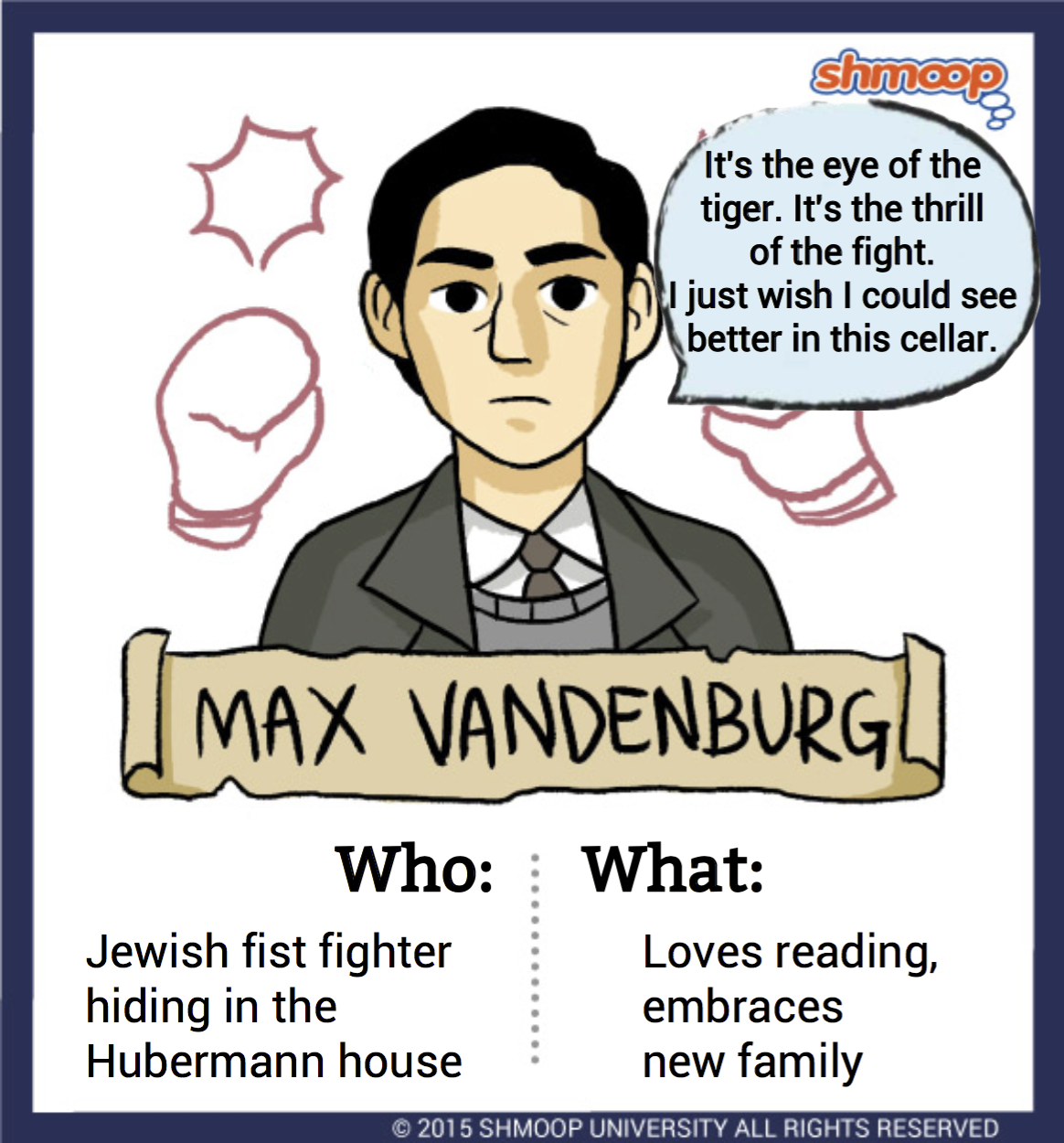 This guy is a fighter in just about all the ways someone can be a fighter. But that doesn't make him a hardened man: our Max is a fighter and a lover.

Max is only twenty-two years old when he enters the story as "the struggler" (Chapters 23, 26, 28). At first his age is a bit surprising, because he almost seems like an old man. Later we learn that when he was Liesel and Rudy's age, he was "the Jewish fist fighter" (Chapter 31). This might seem surprising too, because Max is so beaten down by the time we meet him. On second thought, though, we see this guy fight hard throughout the novel. Two years of hiding and starvation requires considerable fight and endurance.

Even on Himmel Street, in the kindness of his new-found family, we see Max fighting in whatever ways he can. Since he's now trapped in the basement, most of these battles must take place in his vivid imagination:

In the basement of 33 Himmel Street, Max Vandenburg could feel the fists of the entire nation. One by one they climbed into the ring and beat him down. (38.112)

We see him fighting the Nazis by painting over that pages of Hitler's Mein Kampf and writing his own stories over Hitler's words.

Though, this may seem small in the grand scheme of things, Max is fighting with the tools he has before him. For Max, simply surviving is an act of resistance against Hitler. In the end, Max's fighting spirit wins out. He survives Dachau and the Holocaust. When Max and Liesel have a joyful reunion, it's almost like the Jewish fighter is punching Hitler right in the face. Smack.

For Max, these times are loaded with conflicting emotions. One of the most intense of these is guilt. Before arriving on Himmel Street, he's already seething with it. His fighting buddy, Walter Kugler, is a conscripted German soldier, but offers to hide Max anyway. Max is forced to leave his family. Even though his mother and the others push him out the door, he can't forgive himself for leaving them behind. When Walter brings the sad news of his family's disappearance, Max feels extra guilty about even being alive. His family almost surely has been taken to their deaths at a concentration camp. Max finds it very hard to live with this knowledge.

On the walk to Himmel Street his guilt grows. Now he feels selfish for letting the Hubermanns risk their lives by hiding him. Once he comes to know and love them, you can imaging he goes on guilt overload. But, luckily the pleasure he gets from their company overcomes the guilt. Max puts his energies into creating the work of art that not only allows him an outlet for his imprisoned state, but brings immense joy into the lives of those around him.