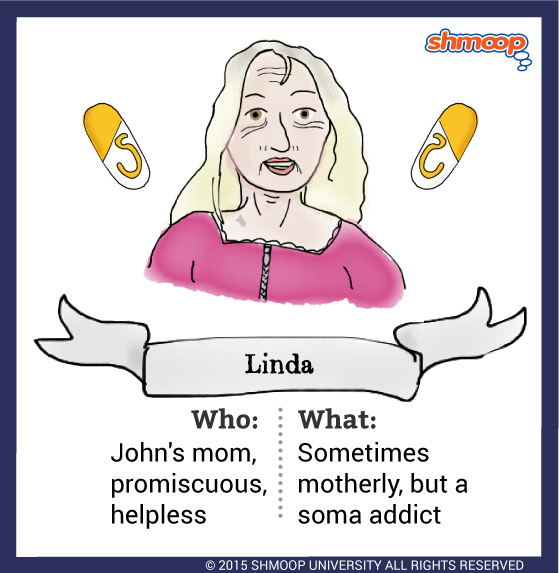 Linda is possibly the most unfortunate creature in all of dystopian literature. (Although Winston and the rats in 1984… that was also pretty bad.) If John was a fun social experiment for the World Controller, Linda is the same for the reader. We get to see how someone very different would fit into our world. Granted, Native Americans on a reservation in New Mexico aren't exactly Huxley's target audience, which means the world into which Linda is thrown isn't exactly our own, but it's a lot closer than the World State. The consequences that Linda faces (repercussions for her promiscuity, a general helplessness, a disgust with anything that hasn't been sterilized, horror at the notion of childbirth) are the same she might suffer if thrown into, say, London in the 1930s. Linda demonstrates that our world and our ideology are completely incompatible with that of Huxley's brave new world. Because of her conditioning, Linda is unable to function as what we might consider a normal human being.

But Linda does overcome her conditioning in one important way: she gives in to her maternal instinct. A little bit, anyway. In John's reminiscence, Linda becomes upset with him, mostly because his existence means she's broken a fundamental rule of society. But as she's about to hit him, she's overcome with… maternal… joy, and ends up hugging and kissing him all over. And for all her sleeping around and name-calling, Linda has loving mothering qualities. She teaches John to read and tells him lullaby-esque stories about the "Other World." All in all, it's not too bad of a job, considering her background. So is this hopeful? Does Linda's case prove that human instinct is stronger than scientific conditioning?

Unfortunately, not really. We're pretty sure Linda's intense soma addiction, rather than her veiled maternal actions, takes the cake in defining her character in Brave New World. Twenty years in a world of harsh reality did nothing at all to teach Linda the value of suffering, family, or long-term human relationships. Apparently, you can take the woman out of the dystopia, but you can't take the dystopia out of the woman.