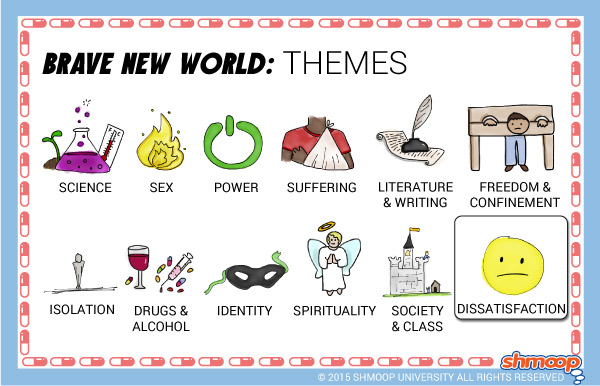 The dystopian future portrayed in Brave New World clearly leaves a lot to be desired—namely individuality, passion, and love. You know, all those qualities that make humans so human. Since individuals have been programmed to be happy, those who do feel any sort of dissatisfaction are confused by it and completely unsure of how to act. Much of the novel deals with putting words to these emotions, finding other people who feel the same way, and finally acting with resolve to change the status quo. In some ways, the sheer number of dissatisfied individuals in Brave New World (apparently all the islands of the world are populated with these unique, headstrong rebels) represents the only optimistic part of the novel; despite conditioning, drugs, and biological engineering, the human spirit will always yearn for more. We're one resilient creature, that's for sure.

John is so dissatisfied with the emotional void of the civilized world that he inflicts pain on himself just to feel something. His actions, then, stem not from a desire for spiritual betterment but from a simple state of discontentedness.

Bernard's feeling of dissatisfaction is a vague malaise, whereas Helmholtz's is a growing passion. They differ not in the nature of their discontent, but rather its intensity. This is why Bernard sinks back into stupor while Helmholtz escapes with his individuality.