Mary Warren in The Crucible 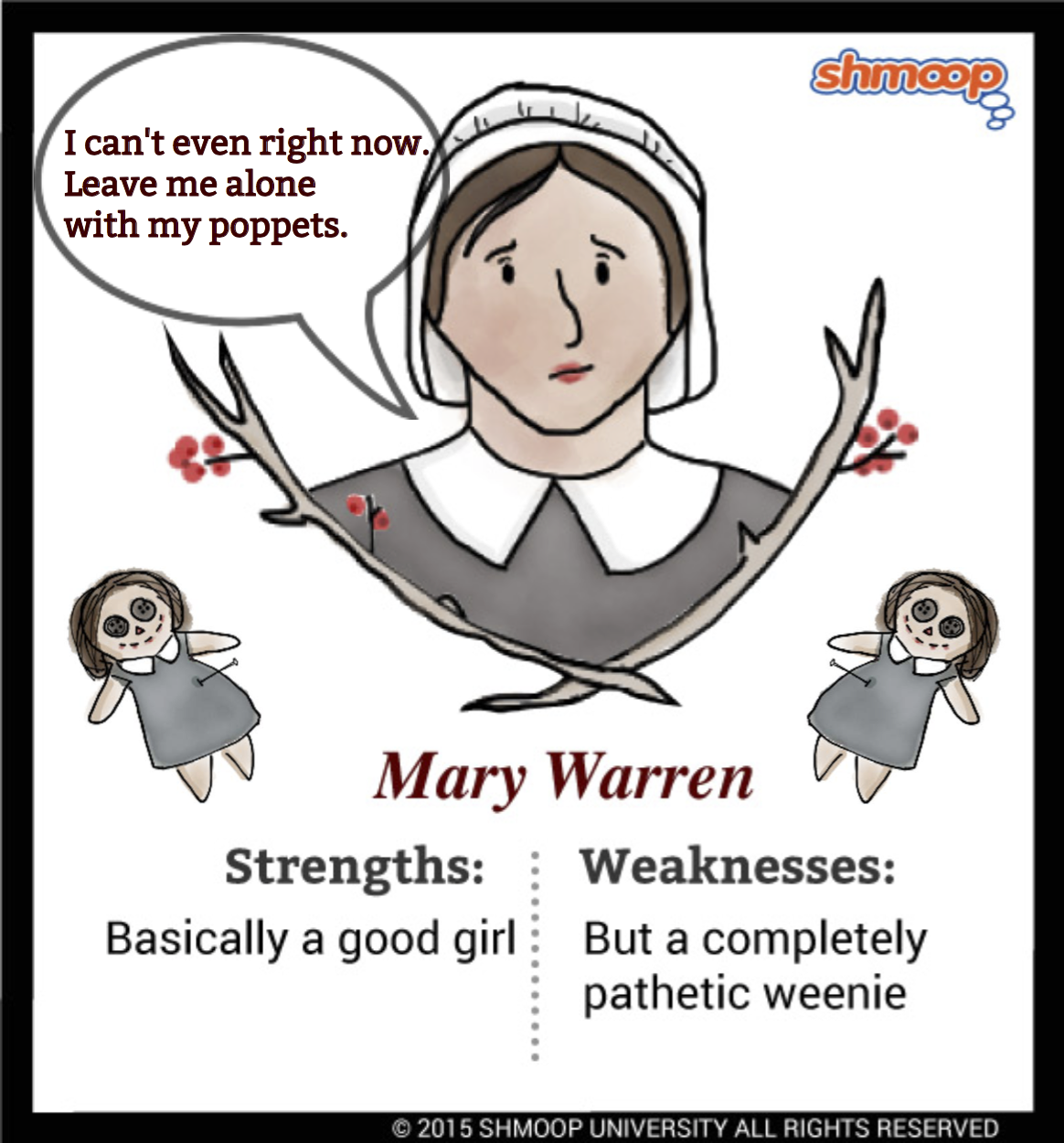 Less Spine Than A Slug

Mary is a likable enough character, but ultimately proves herself to be a total weenie. She's one of the girls who was caught in the forest with Abigail, dancing and conjuring spirits—though we quickly learn that she just watched and did not participate. (This is probably because she was too scared to join in, tbh.) She becomes part of the court that condemns witches. At first she seems to enjoy the power it gives her. When clearly innocent people begin to be convicted, however, Mary feels bad about the whole thing.

The first sign we see of Mary's guilty conscience is when she makes a poppet (a doll) for Elizabeth Proctor, whom she currently keeps house for. Abigail has brought Elizabeth's name up in court, and Mary knows that Abigail did it only for vengeance. Mary was there when Abigail got Tituba to put a curse on Elizabeth, and she also knows about Abigail's affair with John Proctor.

Mary's feeble attempt at recompense backfires terribly, however, as Abigail uses the poppet to frame Elizabeth for witchcraft. This, of course, makes Mary feel even worse and she agrees to go with John Proctor and testify against Abigail in court:

PROCTOR, moving menacingly toward her: You will tell the court how that poppet come here and who stuck the needle in.

MARY WARREN: She'll kill me for sayin' that! [...] Abby'll charge lechery on you, Mr. Proctor!

MARY WARREN: I have known it, sir. She'll ruin you with it, I know she will.

PROCTOR, hesitating, and with deep hatred of himself: Good. Then her saintliness is done with. [...] We will slide together into our pit; you will tell the court what you know.

Mary's ultimately spineless nature is revealed in the court scene, when under pressure of being hanged she once again flips, accusing John Proctor of witchcraft and Devil-worship.

While Mary causes a lot of harm in the play, she lacks Abigail's maliciousness. She's just a weak girl who gets in way over her head. Yes, Miller's portrait of Mary is sympathetic, but he doesn't let her off the hook. It could be that he's pointing out how even good-hearted people can commit destructive acts when swept up in mass hysteria like the Witch Trials (or McCarthyism and the Red Scare).