Hazel Grace Lancaster in The Fault in Our Stars

Yeah, we know, cancer doesn't define her. But Hazel herself opens the book with that fact, so we figured we should, too. From the beginning, she wastes no time in laying out her situation without any fluff or self-consciousness:

This is a girl who has no illusions about her state of health. Hazel knows that even though she's on a drug that keeps her tumors in check, she'll never be your typical teenage cheerleader. But don't get us wrong. She's also not sitting around feeling sorry for herself. She doesn't talk about her illness in lurid, self-pitying detail at all; instead, she tackles it with a healthy dose of humor:

I didn't tell him that the diagnosis came three months after I got my first period. Like: Congratulations! You're a woman. Now die. (2.13)

What do you think: is she handling her impending death well or is she hiding some deeper sadness? In order to answer that, we should probably get to know her a little better.

Hip to the Max

Hazel's marches to the beat of her own drummer. She's got that short pixie haircut that catches Augustus's attention. Plus, she seriously exists in her own little world, devil-may-care attitude and all. When Augustus first meets her, he's struck by how readerly she is and how she doesn't even go to school with other teenagers.

On top of that, Hazel seriously doesn't care what's in and cool anymore—she just knows what she likes. What she likes may be sitting around and watching reality TV shows with her parents, but at least she's being true to herself. As she says to her mother: "I take quite a lot of pride in not knowing what's cool" (3.28).

Add to that her witty commentary and dry humor, and it's a treat to have her as the narrator. Augustus puts it best:

Yes, Augustus. She certainly is something else.

Hazel's parents, for one, think their daughter is just too passive. They're afraid that she's not seizing life by the horns, that she's depressed, and that she shouldn't just want to watch America's Next Top Model in solitude all the time. (Apparently they don't know how tough it is to smize.)

Basically, they don't think Hazel is fighting hard enough for her life.

But is that true? Hazel sure puts a lot of stock into trying not to hurt other people. Sure, she's a total eye-rolling teenager. But she tries to make things easier for her parents because she's afraid of hurting them.

There is only one thing in this world s***tier than biting it from cancer when you're sixteen, and that's having a kid who bites it from cancer. (1.28)

Excuse her language, but this is a really considerate girl here. Maybe she's not super gung ho about living life to the fullest, but she does her best to minimize the hurt or damage she could cause. She even quite selflessly (and misguidedly) tries to say nay to her feelings for Augustus, just because she's so afraid of hurting him if she dies:

I realized while listening to Kaitlyn that I didn't have a premonition of hurting him. I had a postmonition. (6.45)

Hazel imagines what it would be like for Augustus after she dies. And especially since he's already had one girlfriend die of cancer, she doesn't want to do that to him.

But the thing is, you can't stop yourself from hurting everyone. It's just not possible.

A Girl in Love

Speaking of Hazel's selfless actions on Augustus' behalf, why does she go through all the trouble? Because she's experiencing the stomach-churning madness that is first love, of course. When she first sees Augustus, her attraction to him is instantaneous. For starters, he's gorgeous. But they also connect on a more cerebral level. They get each other, as rare as that is.

I almost felt like he was there in my room with me, but in a way it was better, like I was not in my room and he was not in his, but instead we were together in some invisible and tenuous third space (5.67)

The way they are with each other is easy and drama-free. They just like each other, plain and simple, and Hazel finds herself giving into all the sweet, real feelings that she has for Gus.

He wasn't perfect or anything. He wasn't your fairytale Prince Charming or whatever. He tried to be like that sometimes, but I liked him best when that stuff fell away. (25.13)

When Augustus dies, she can look back on their time together without any bitterness or need to change it. It was what it was. He was who he was. And she loved him.

Hazel is our kind of lady. Why? Because she loves to read. One book in particular really inspires her: An Imperial Affliction. It's about a young girl with cancer, so it's no wonder it hits home. But what really gets her is the ending: the book ends mid-sentence. 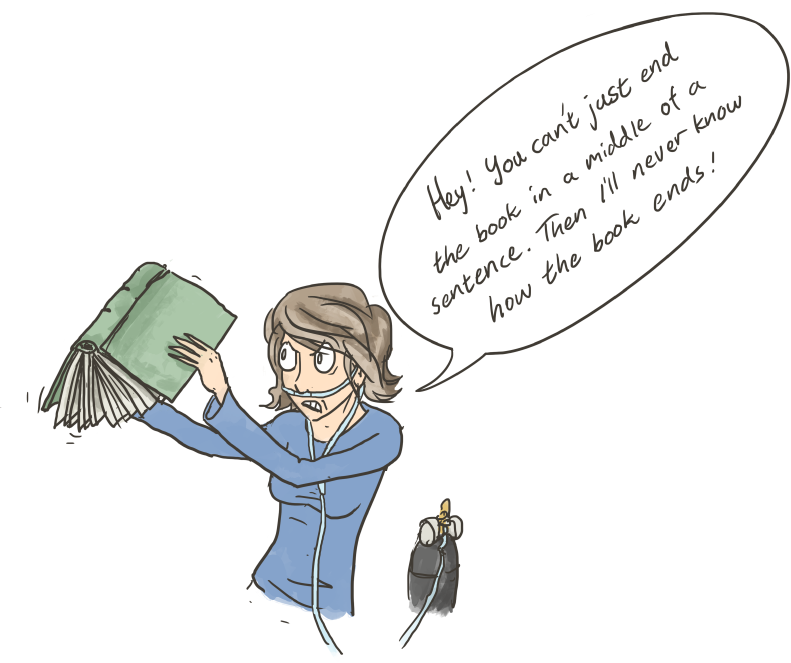 Why is Hazel so obsessed with finding out the ending to this book? Check out "Symbols" for some of our thoughts, but we dare you to come up with your own reasons, too.