Gandalf the Grey in The Fellowship of the Ring 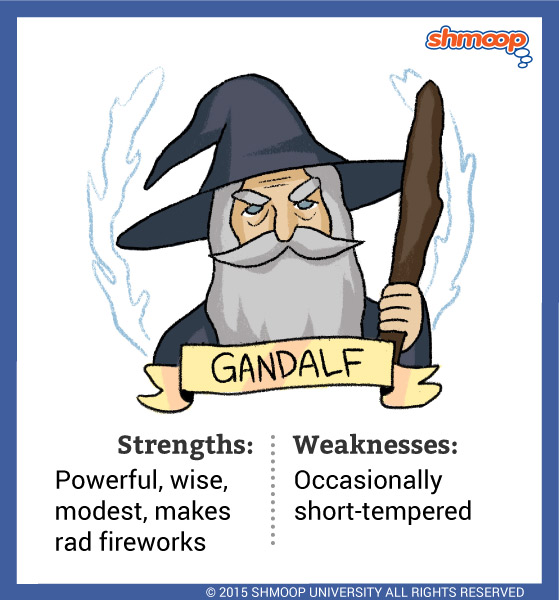 Wizard Gandalf the Grey is the wise mentor figure of the Lord of the Rings, like Dumbledore in Harry Potter or Obi-wan Kenobi in Star Wars. He even looks like these guys, with "his long white hair, his sweeping silver beard, and his broad shoulders, [making] him look like some wise king of ancient legend" (2.1.82). He’s the one who finds Frodo in the Shire and informs him of the unfortunate truth about his inherited Ring. He also gives great advice to the Fellowship as they travel. Still, while Gandalf is clearly a figure of wisdom in the novels (as a gray-bearded Wizard, how could he be anything but wise?), he is not perfect.

In The Hobbit, Gandalf really seems like he knows everything. He disappears at just the right time for Bilbo to prove himself to the Dwarves, and then he returns just in time to manage the Battle of the Five Armies. But if there is one theme to Gandalf's appearances in The Fellowship of the Ring, it is that he is never in quite the right place at the right time.

Even though he promises to accompany Frodo and Sam on their trip out of the Shire, Gandalf never turns up, leaving Frodo, Merry, Sam, and Pippin to muddle through the Old Forest on their own. And Gandalf tries to lead the Fellowship through the Mines of Moria, only to fall down into a bottomless pit during his battle against the Balrog of Morgoth. Gandalf's sudden disappearance leaves Aragorn in charge of the Fellowship before he feels ready.

Both of these sudden disappearances have one thing in common: they leave the members of the Fellowship to cope with challenges on their own. Gandalf is such a powerful ally (and such a bossy pants) that, if he stayed with the Fellowship throughout all of their adventures, they might never develop into the self-sufficient leaders that they must become by the third book.

Still, while the consequences of Gandalf's disappearances may be good for the other characters’ development in the long run, the fact that he does not mean to leave in either case is kind of frightening. In The Hobbit, it seems like Gandalf is never truly surprised. He is always ten steps ahead of everybody else, friend and foe alike. But in The Fellowship of the Ring, both Saruman’s betrayal and the Balrog shock Gandalf. Gandalf’s surprise at these twists and turns prove that he is as swept up in the War of the Rings as the other, less wise characters. He may still be super-powerful, but that won’t be enough to protect him from the enemies he’s facing in Lord of the Rings.

The thing is, the Ring Quest is not the kind of task where raw strength is all that is needed. The Ring feeds off power. It manipulates people’s desire to change the world, even if they want to change it for the better. Gandalf is (a) very powerful, and (b) a control freak. All Gandalf does with his time is travel around Middle-earth trying to make things better. So, oddly, Gandalf is the last person in the world who should touch the Ring. He is a great man and a terrifying Wizard. But the Ring would easily twist his intentions to evil. With that much power literally in his hands, he would soon become a tyrant just like Sauron.

Gandalf has an important role in helping the Ring Quest along, especially at its early stages. But he cannot help too much, because he might fall under the influence of the Ring. In a way, Gandalf’s sudden disappearance in Moria is the best thing that could have happened to the Ring Quest. It leaves Frodo free to figure out his own path without Gandalf’s heavy influence.