Meriadoc (Merry) Brandybuck in The Fellowship of the Ring 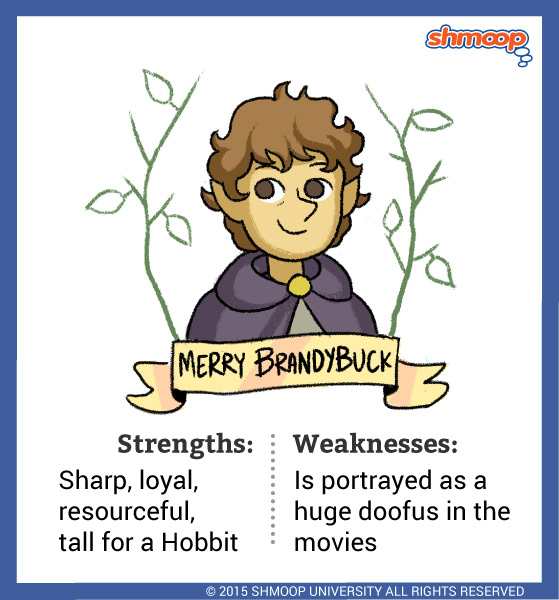 In our "Character Analysis" of Frodo, we said that Frodo gets the biggest makeover of the series in Peter Jackson's movie version of The Fellowship of the Ring. We still think that's true, but Merry comes in a close second: Book Merry is quite serious, though he likes joking with his young cousin Pippin. Book Merry definitely doesn't seem like the kind of Hobbit to tumble down a hill and land on a large carrot, or to half blow himself up with a dragon firecracker at Bilbo's eleventy-first birthday party, like Movie Merry. Oh, don't get us wrong, Book Merry is still a happy-go-lucky young Hobbit. But he's also a great planner and quite sly – much more devious than Movie Merry.

It's Book Merry who figures out that Frodo is planning to slip out of the Shire on some kind of quest. He also puts together what it is that Frodo is carrying, since he once saw Bilbo disappear right in front of his eyes using a golden ring. Book Merry is a pretty smart guy, unlike Movie Merry, who starts out big-hearted as all get-out but isn't the brightest bulb in the box.

However, we don't find out too much more about this intriguing Book Merry until he gets out from under the shadow of Frodo and Sam. The Fellowship of the Ring really focuses on the two main Ring-bearing Hobbits. Merry does have an exciting brush with Black Breath thanks to the Black Riders in Bree, but besides this illness (foreshadowing The Return of the King?) he doesn’t stand out too distinctively in this book. It isn't until The Two Towers that Merry and Pippin truly start coming into their own, as they start having their own adventures.

So for now, we will just add one last note about Merry: he is a Brandybuck. This doesn't just mean that he has an awesome last name (though it is pretty great). The Brandybuck family also has a reputation for being, well, a bit weird. Oh, they're very wealthy, with a huge settlement on the other side of the Brandywine River from Hobbiton. But they like boats, which, we hear from Sam, no natural Hobbits are supposed to enjoy. So Merry's love of adventure is not just a matter of chance or accident. It's a family thing. No wonder he's the one who agrees with Frodo that taking a short cut through the Old Forest is a good idea – taking risks and doing strange things runs in his blood.