Sam Gamgee in The Fellowship of the Ring 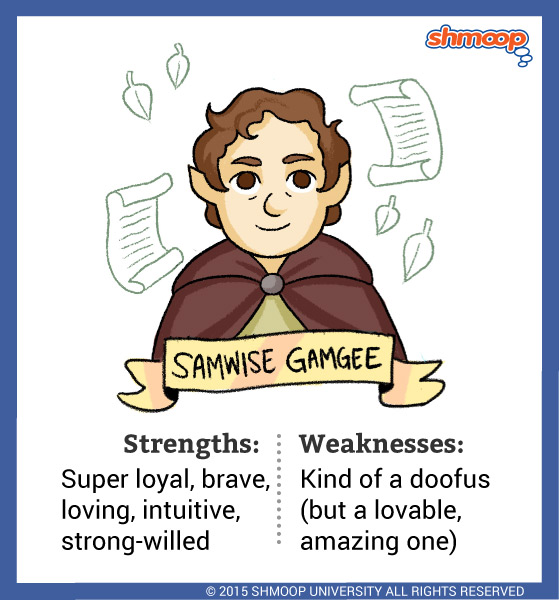 Sam Gamgee sure is lovable – but he's also kind of a dufus. We say that in the nicest possible way, because obviously Sam has a heart of gold. But come on: he gets into the Ring Quest because he happens to be eavesdropping in the wrong (or right?) place at the wrong time (under an open window at Frodo's house in the Shire). He's often the only comic relief we get in The Fellowship of the Ring, singing comic songs and roughhousing with the other Hobbits. Still, while Sam does not seem designed for this epic questing business, his loyalty, faith, and common sense make him a hero almost in spite of himself.

At this stage in the Lord of the Rings sequence, Sam has a lot in common with earlier The Hobbit-era models of Hobbit-hood. When we first see him in The Fellowship of the Ring, he is drinking beer at a local pub and enjoying a good smoke, like all normal Hobbits are supposed to do. If Frodo's heavy reading and love of Elvish language are preparing him to be the Hobbit version of a tragic hero, Sam is "the successor to Bilbo of the first book, the genuine Hobbit." (source, 105; in a letter to Christopher Tolkien, 12/24/1944). He doesn't want to be anything grand, like a Wizard or a warrior. He just wants to enjoy the comforts of a warm home with a pretty wife (you can look forward to that in the rest of the trilogy...).

A Hobbit and His Gardener

In The Fellowship of the Ring, Sam faces a basic conflict between his love of the Shire and his family and his complete loyalty to his employer, Frodo. Sam doesn't want to leave the Shire (at all), but he does it anyway because he feels it is his duty to his boss. Just think for a second about how odd that is: would you follow your boss to hell and back? But that's exactly what Sam decides to do.

Certainly, Sam's relationship to Frodo does not fit your standard gardener-homeowner dynamic. He seems to regard Frodo as a mixture of a big brother and a lord – he believes that Frodo can do no wrong, but he also wants to do his best to protect Frodo from his own decision to carry the Ring to Mordor. Sam's friendship with Frodo deepens and changes over the course of the three books. At this stage in the series, there is a very strong master-servant class difference between the two Hobbits that Sam never forgets. He is happy to serve Frodo, and to leave all the decision-making to his master. Let's check out Sam's thoughts on leaving Rivendell:

Sam eased the pack on his shoulders, and went over anxiously in his mind all the things that he had stowed in it, wondering if he had forgotten anything: his chief treasure, his cooking gear; […] linen; various small belongings of his master's that Frodo had forgotten and Sam had stowed to bring them out in triumph when they were called for. He went through them all.

First of all, Sam is setting off on an adventure that is going to change his life. He is going to see things – the lovely Galadriel, the terrifying Balrog of Morgoth – that no Hobbit, not even the famous Bilbo Baggins, has ever seen before. But instead of worrying about what the future will bring, Sam thinks about his cooking gear and his forgotten rope. Unlike Frodo, whose head is always in the clouds, Sam thinks mainly about practical matters.

Secondly, Sam's way of talking – even to himself – announces that he is of a different social class from the rest of the Hobbits. The Hobbits as a group may seem very plain and ordinary next to High Elves like Gildor Inglorion or Glorfindel. But even among Hobbits, Sam is marked as working class, not only because of his job (gardener and servant) but also because of his casual, often rough way of speaking.

That's Okay, Man, You Take It!

Honestly, we think Sam's lower class position helps explain why Sam doesn't even seem tempted to rise up and take the Ring for himself. After all, Sam's loyalty is partly a result of his servant status.

Since Sam knows his place and has no ambition to rise socially, he never appears to envy Frodo's wealth or authority in the Shire. In fact, it's quite the opposite: Sam loves and admires his master, as though Frodo's honor reflects well on Sam himself. To give an example, when Butterbur gives Gandalf's description of Frodo as "A stout little fellow with red cheeks" (1.10.39), it is Sam who looks offended on Frodo's behalf. Sam is so loyal to Frodo, and to the idea of Frodo as a gentleman (or gentleHobbit?), that he cannot seem to imagine taking the Ring for himself. Tolkien sums up Sam's social class:

Sam is meant to be lovable and laughable. Some readers he irritates and even infuriates. I can well understand it. [...] Sam was cocksure, and deep down a little conceited; but his conceit had been transformed by his devotion to Frodo. He did not think of himself as heroic or even brave, or in any way admirable – except in his service and loyalty to his master. That had an ingredient (probably inevitable) of pride and possessiveness. (source, 329; in a letter to Mrs. Eileen Elgar, September 1963).

Sam's love for Frodo doesn't only help Frodo bear the burden of the Ring. It also helps Sam become a better Hobbit. He avoids any conceit on his own behalf; his only arrogance comes from pride in Frodo. Sam's devotion to Frodo is like Frodo's devotion to all Middle-earth: it helps to protect him from the Ring's temptations and promises of power. If all you want is for someone else to be happy and comfortable, why would you need a Ring of Power?