Sauron in The Fellowship of the Ring

As you may have guessed from the fact that the characters sometimes call him "the Enemy," Sauron is the enemy of all of Middle-earth. We don't get to meet Sauron in person in The Fellowship of the Ring (unless you count the huge, rolling, fiery eye that Frodo and Galadriel see in the Mirror of Galadriel, searching for Frodo and the Ring). But we do know that he is your classic tyrant, wanting complete and total domination over everything that happens in his realm. Worst of all, he is not content with being a tyrant in Mordor (his home in the south of Middle-earth); no, he wants his lands to extend across the whole world. 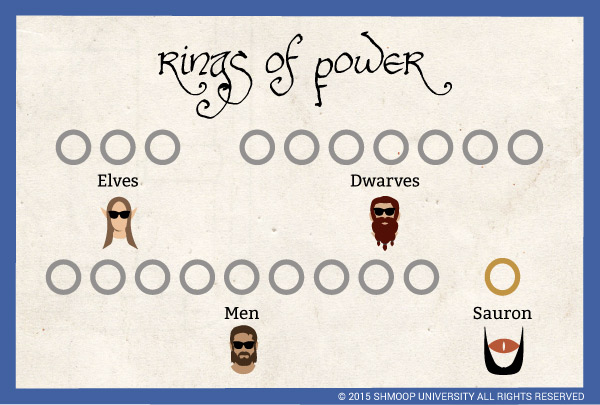 Given how power-hungry he is, we find it a little surprising that Sauron is careless enough to put some of that power into a Ring, which can be lost. However, in a way, it is lucky for the good side that he is so arrogant, because with the Ring goes a portion of his power. If the Fellowship succeeds in destroying the Ring, they will end Sauron's power in Middle-earth.

In The Fellowship of the Ring, Sauron operates mostly through messengers and agents. His Black Riders find their way to the Shire in search of his Ring. He sends messengers to King Dáin, the Dwarf King Under the Mountain at Erebor, asking for the Dwarves' help in finding the One Ring. (The Dwarves say no, by the way.) We think it's brilliant that Tolkien doesn't try to represent Sauron directly interacting with people. Since Sauron's servants are so terrifying, Tolkien leaves it to our imaginations to decide how truly horrible the big boss must be. And our imaginations are probably always going to be more upsetting than anything written down by someone else.