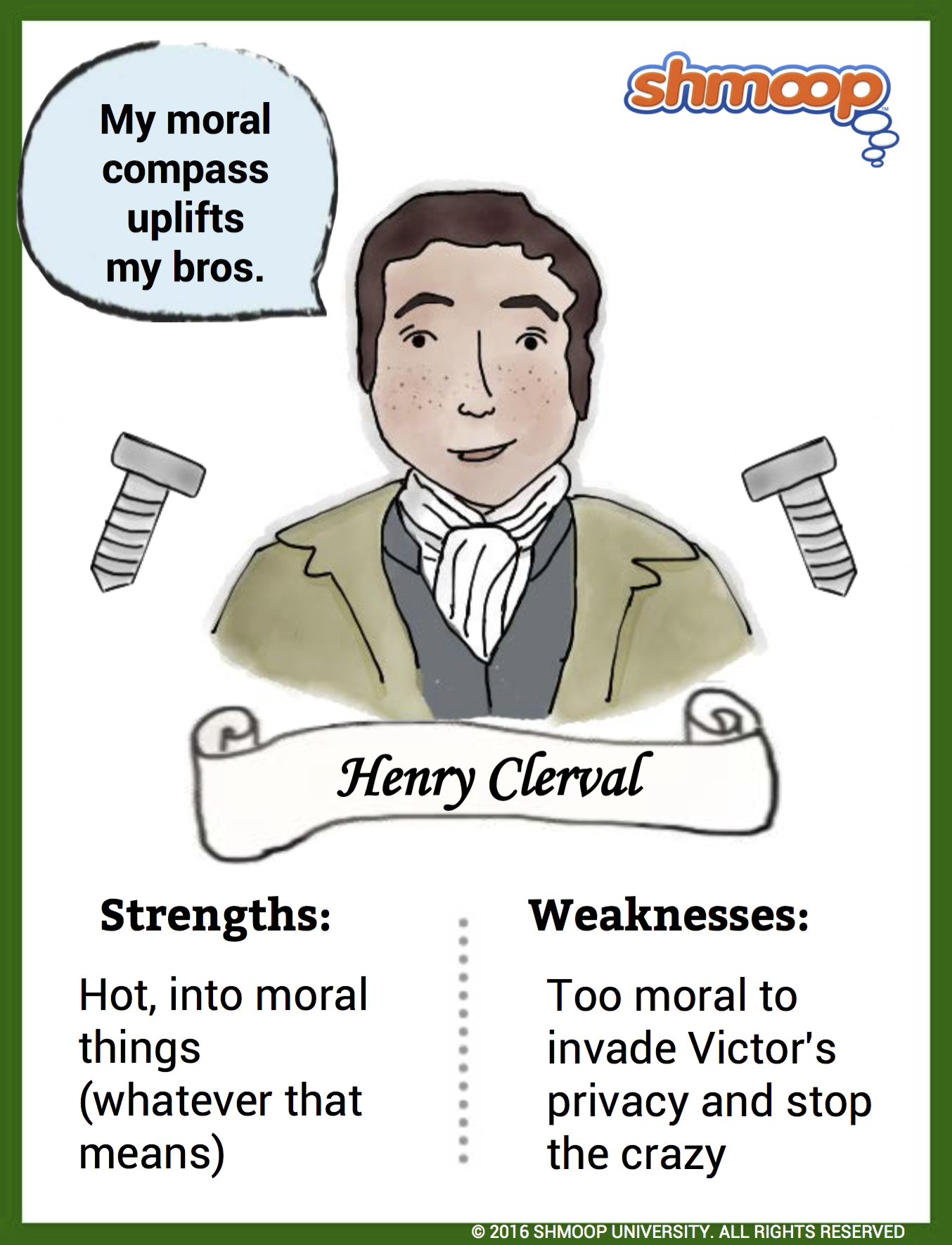 Henry Clerval might just be the only thing keeping Victor from being a monster himself. Victor's childhood friend Henry is just the pinnacle of awesomeness. Victor describes him as having a "noble spirit," of being "perfectly humane, so thoughtful in his generosity, so full of kindness and tenderness amidst his passion" (2.5)—in other words, almost the exact opposite of Victor himself.

And, unlike Victor, Henry has no interest in science. He's into the "moral relations of things," a tricky phrase that means something like, "how to be a good person." See, he wants to be famous, too, but not for discovering the secret of life. He wants to be famous for being a "gallant and adventurous benefactor of our species" (2.5).

In other words, he's our humanities guy. While Victor blows up his mom's garage with a chemistry set, Henry is reading superhero comics. (The nice superheroes.)

So why doesn't he intervene? Why doesn't he keep Victor from creating a murderous monster? Because Victor never tells him. Clerval is perceptive—he's "always quick in discerning the sensations of others" (6.15)—but he respects his friend's privacy and "never attempt[s] to draw [his] secret" (6.15). Big mistake. What we can't decide is this: is Victor subtly blaming Clerval? Would this whole tragedy somehow been averted if Clerval had been a good enough friend to make Victor confess?

If you're thinking that Clerval sounds a little too good to be true, we think you're right. He's less of a character in his own right than a foil to show us just how messed up Victor is. Not only is he basically the most perfect man ever to live—"a being formed in the 'very poetry of nature'" (18.17), to use Victor's alarmingly enthusiastic phrase—he's also eye candy.

If the monster is the epitome of ugliness, that Henry is his polar opposite, at least in the looks department which, if you've spent any time with Victor Frankenstein, you know is the most important aspect of any person. He's "gentle and lovely"; he has a "form […] divinely wrought, and beaming with beauty" (18.19). And, yes: we're with you in thinking that these adjectives and adverbs sound a lot more like female beauty than male beauty. What's the deal with that? And if Victor really loves the guy so much, then why were we a lot sadder when we saw the monster crying over Victor's body, than when Victor sees Henry's drowned and bloated corpse?