Long Island and New York City in the Early 1920s

Great Gatsby is set in New York City and on Long Island, in two areas known as "West Egg" and "East Egg"—in real life, Great Neck and Port Washington peninsulas on Long Island. Long Island's beach communities really were (and still are) home to the rich and fabulous of the New York City area, and Fitzgerald actually lived in a small house in West Egg. Apparently, he listened to his teachers and wrote what he knew, because Nick describes his own house as "an eyesore" that's "squeezed between two huge places that rented for twelve or fifteen thousand a season" (1.14).

These people are rich, and they have a lot of leisure time to spend worrying about how they're perceived socially. Nobody seems particularly interested in politics, or religion, or even education (you need the degree, but you don't need to have learned anything): instead, they spend their time conforming to certain standards, like not wearing pink suits (7.132). This setting matters, because it means that a lot takes place through innuendo and suggestion. There's very little violence or even outright arguing—people snap at each other and make snide comments, but these aren't the type of people to settle things with violence, at least not with each other. That's why the violent acts—Tom breaking Myrtle's nose; Wilson shooting Gatsby—take place between classes. It's not rich people beating up other rich people; it's violent conflict between the rich and the poor.

East Side/ West Side 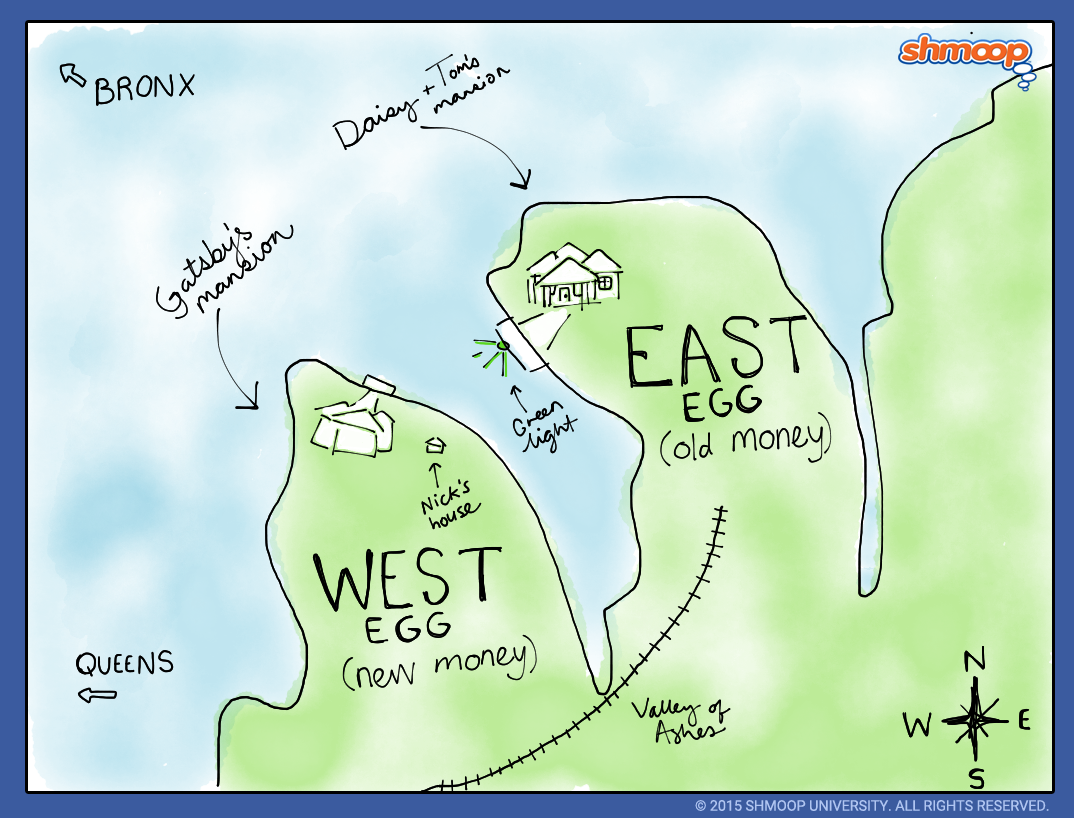 Rich people do like to spend their time drawing subtle distinctions between types of wealth. Nick tells us right away that East Egg is the wealthier, more elite of the two Eggs. Despite all his money, Gatsby lives in West Egg, suggesting that he has not been able to complete his transformation into a member of the social elite. The distance that separates him from Daisy isn't just the water of the bay; it's also class.

The second contrast is between the city scenes and the suburban ones. Like Nick Carraway, Tom Buchanan and Jay Gatsby commute into the city for their respective lines of work, while the women are left behind. This geographical divide ends up being a gender distinction, too. But the city is important in other ways, too; Tom only interacts with his mistress in the city, and Gatsby only sees Meyer Wolfsheim there. They both use the city to hide their goings-on from the people they value on Long Island.

We open in the early 1920s: just after World War I, and right in the middle of Prohibition, when alcohol was effectively illegal. We say "effectively," because plenty of people manufactured, sold, and drank alcohol anyway—like all the characters in the book, who seem to be constantly drunk, and Gatsby, who made his money bootlegging: selling illegal alcohol.

But it's not all champagne and yellow Rolls-Royces. Myrtle and George Wilson inhabit a totally different setting: the grey valley of ashes that joins the fabulous worlds of the Eggs and Manhattan. Fitzgerald didn't know yet, but we do, that the excesses of the 1920s collapsed with the stock market in 1929--leading to a much grayer, grimmer life all over the country. Did Fitzgerald suspect that the fabulous lifestyles of Tom and Daisy's crowd were doomed from the start?