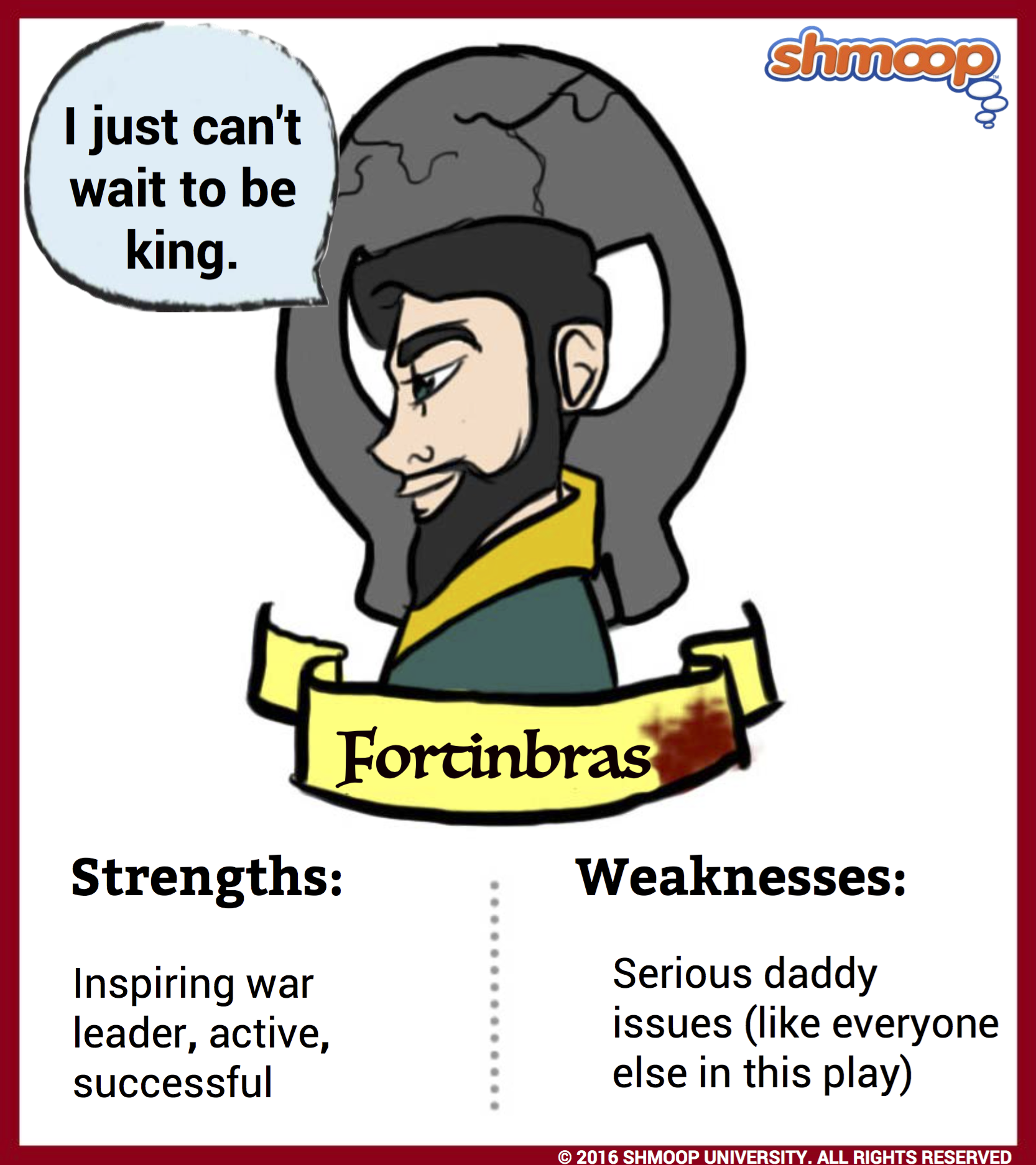 We like to think it's no coincidence that Fortinbras' name makes a great chant: "FortinBRAS! FortinBRAS." He's a Norwegian prince with a trigger finger (or a trigger army) who seems to be able to inspire a lot of love and battle lust in his subjects; they follow him all the way to Denmark just to reclaim a little piece of land that his father lost, and they back him as he sweeps into court to take the throne.

So, what's this hero's backstory?

Yeah. Like every other young man in this play, Fortinbras has a serious case of daddy issues. His dad Old Fortinbras, former King of Norway, made a bet with Old Hamlet and wound up losing his life and some important Norwegian territory in the process. Naturally, young Fortinbras now has to reclaim the land his father lost.

Sound familiar? Of course. But while Hamlet sits around contemplating life and death, Fortinbras takes immediate action by raising an army to reclaim Norway's lost territories. Though his uncle (the current king of Norway) at first convinces Fortinbras not to attack Denmark, in the end, prince Fortinbras helps himself to the Danish throne.

Behind the stories of both Fortinbras and Hamlet is the question of why their uncles are wearing the crowns that should, in the normal pattern of who-gets-to-be-king, go to them (the sons). Fortinbras deals by going out and conquering other countries; Hamlet, in contrast, only mentions the fact that Claudius has "popped in between the election and [his] hopes" (in other words, his hopes of becoming the King of Denmark). He distracts himself with thinking, not with conquering.

Our prince compares himself explicitly to Fortinbras when he passes Fortinbras' armies in the fields and he sees Fortinbras as a model for how he should behave. "To be great / is not to stir without great argument / but greatly to find quarrel in a straw / when honor's at the stake" (4.4.56-59). In other words, Hamlet realizes that Fortinbras doesn't have very good reasons for leading an army against Poland —but reasons don't really matter. Great men don't need a reason to preserve their family's honor. Fortinbras, like Laertes, is an example of action with little thought —precisely the opposite of Hamlet.

Our question: why is Fortinbras successful while Laertes isn't? (Maybe because he's not in love with his sister? Just saying.)