Moira in The Handmaid's Tale 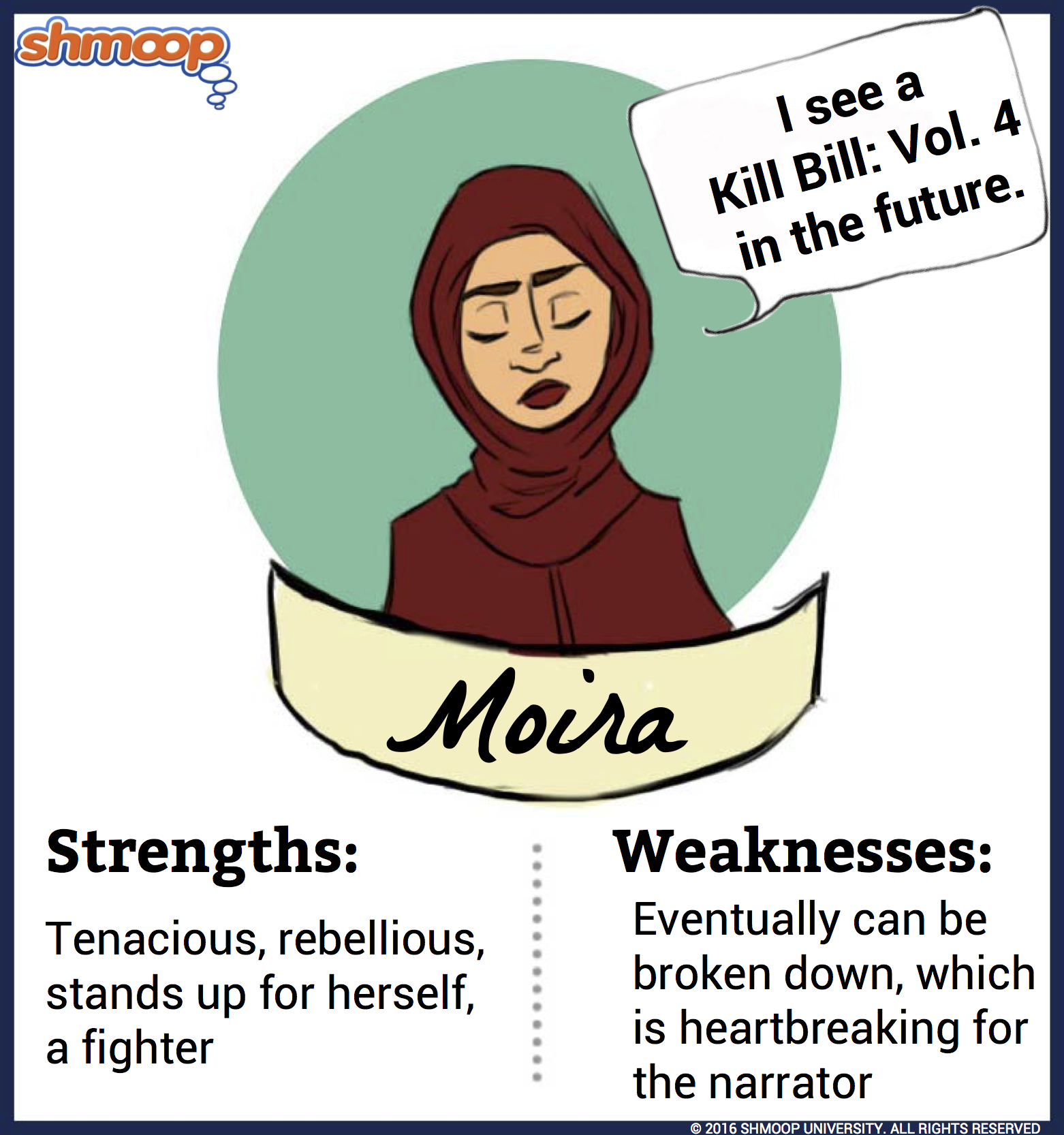 Rebel With A Cause

Remembering Moira's story always brings a tear (or, to be honest, several dozen tears) to our eyes. Moira starts out in a blaze of "You can't break me" glory. She's a fighter and a leader and a fury-fueled dynamo... which makes the fact that she is eventually tamed by the terrifying society of Gilead even more tragic than it is with other, less fiery, characters.

After ordinary life is interrupted and destroyed, the narrator loses everything. She never sees her husband, daughter, or mother again. The one person she ever sees again from her old life is Moira, her best friend. Moira has been the narrator's friend since college, when they smoked, joked, and stood up against the world together. Moira knew the narrator's family well, although it doesn't sound like the narrator ever really knew Moira's.

Few of Moira's defining physical or lifestyle characteristics are revealed in the text, apart from her sexual preference—she's a lesbian. We get a pretty good sense of her personality, though. She's tenacious and rebellious and she stands up for herself. She demands her own rights and refuses to shut up and take it from the Center. She won't forget about the time before and the world that used to be.

At the Center Moira is a voice of reason, sense, and action. The narrator admits that "Moira was always more logical than [she was]" (28.3). Moira's slaps Janine into reason, tells the narrator how to take care of other people in the Center, and tries to escape. In fact, she may be the only person who gets out of the Center successfully. Although she's brutally beaten after the first escape attempt, this only fuels her desire to get back out. She takes a toilet apart and uses a piece of it as a weapon. Then she bluffs her way along the streets of Gilead dressed like the enemy.

Out Of Their Comfort Zone

After her escape, Moira provides the other women with a sense of fantasy and dread. While they are starting to succumb to the Center's brainwashing and feel comfortable there, Moira never does; she is never willing to concede her freedom:

Moira was like an elevator with open sides. She made us dizzy. Already we were losing the taste for freedom, already we were finding these walls secure. In the upper reaches of the atmosphere you'd come apart, you'd vaporize, there would be no pressure holding you together. (22.45-47)

Remembering her friend's story gives the narrator hope and makes her life (if you can call it that) a little more bearable. This is why it's so awful to find Moira working at Jezebel's and learn that Gilead has finally managed to beat her into submission:

She is frightening me now, because what I hear in her voice is indifference, a lack of volition. Have they really done it to her then, taken away something—what?—that used to be so central to her? And how can I expect her to go on, with my idea of her courage, live it through, act it out, when I myself do not? (38.62)

Moira represents courage and hope for the narrator, a will and an agency that others have lost. As long as Moira had these qualities, it was okay that the narrator didn't, because at least she knew they still existed in the world. If Moira has lost them, Gilead has really won.

Moira's ultimate fate, like those of many of the other characters, remains unresolved. When we last hear about her, she's working at Jezebel's. The narrator desperately wants a different outcome for Moira:

I'd like her to end with something daring and spectacular, some outrage, something that would befit her. But as far as I know that didn't happen. I don't know how she ended, or even if she did, because I never saw her again. (38.69)

There's a great sense of despair here, even as Moira's "daring," "spectacular," and "outrage[ous]" qualities are celebrated one final time. If Moira, the resourceful two-time escapee, only made it as far as Jezebel's in her attempt to get out of Gilead, things don't look good for any other woman trapped in this hellish society.