Lucius Malfoy in Harry Potter and the Chamber of Secrets 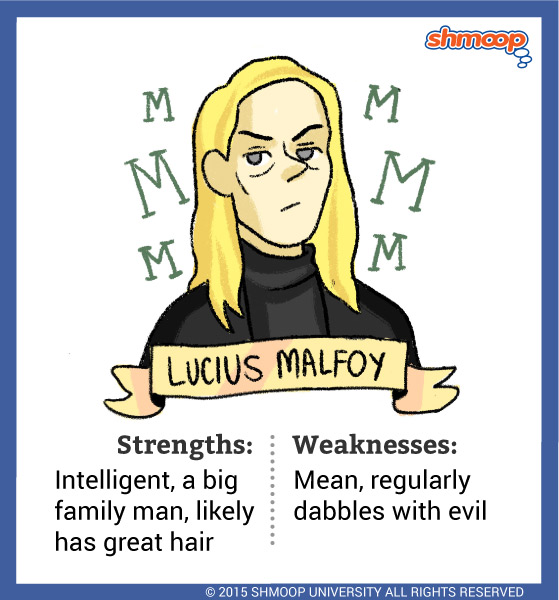 Lucius Malfoy, Draco's father, is a pureblood wizard with lots of money and high social standing. He's also a complete snob, a bigot, and a Dark wizard. We first see him when Harry is hiding in a cabinet at Borgin and Burke's, a shop in Knockturn Alley. Lucius is selling off some of his collection of Dark artifacts to avoid Ministry prosecution. He has also dragged Draco along, and watching the two of them together when they don't know they're being observed is interesting to compare to the Weasleys.

Lucius mocks Draco coldly all the time, but he also spoils him by buying him expensive presents he hasn't earned. Lucius promises Draco a racing broom, which sends Draco whining, "Harry Potter got a Nimbus Two Thousand last year" (4.65). Yet, later on in the conversation, Lucius jabs at Draco: "I hope my son will amount to more than a thief or a plunderer, Borgin […] Though if his grades don't pick up […] that may indeed be all he is fit for" (4.83-4). Lucius alternately indulges and humiliates Draco in the space of one conversation, which can't exactly be good for Draco's character.

Lucius's influence on Draco is clearly huge. Draco imitates his father's opinions and his manners interacting with other people. We see proof of Lucius's influence when we watch Lucius fighting with Mr. Weasley. Lucius insults Mr. Weasley in exactly the same bigoted way that Draco insults Ron. So at least part of the fault for how Draco turns out certainly belongs to Lucius.

Lucius has a surprisingly important role in bringing about the events of Book 2. When he and Mr. Weasley fight in Flourish and Blotts, Lucius takes the opportunity to slip Ginny Tom Riddle's diary. As attacks on Muggle-borns begin, Lucius leaps at the chance to get rid of Professor Dumbledore by bullying the other eleven Hogwarts school governors into signing an order for Dumbledore's dismissal. At the end of the novel, Professor Dumbledore speculates:

Imagine […] what might have happened [if Ginny had taken the fall for the attacks at Hogwarts]…The Weasleys are one of our most prominent pure-blood families. Imagine the effect on Arthur Weasley and his Muggle Protection Act, if his own daughter was discovered attacking and killing Muggle-borns…Very fortunate the diary was discovered, and Riddle's memories wiped from it. Who knows what the consequences might have been otherwise. (18.84)

So Lucius tried to use the diary to force Ginny to attack Muggle-borns, thus discrediting Mr. Weasley and his Muggle Protection Act. As Lucius points out, Professor Dumbledore can't prove any of this. Still, it's enough that Lucius is aware that Professor Dumbledore knows what he's done, at least, for now. Of course, Harry is sure it's true, especially since Dobby (the Malfoy's house-elf) confirms his suspicions at the end of the book. Lucius's plans are foiled and he loses a useful servant. Book 2 is definitely a blow to Lucius.