Hermione Granger in Harry Potter and the Prisoner of Azkaban

This is really Hermione's novel in lots of ways, and it's fitting that first three books focus heavily on Harry's three closest childhood friends: the first is arguably Hagrid's, second is Ron's book, and this one is Hermione's. Hermione undergoes the strongest emotional journey in the book and evolves to such an extent that she's on level with our protagonist. And it's notable that Hermione changes the most and gets a spotlight put on her as a character in the novel that's the transitional one in the series, the one that sets the stage for the upcoming, more adult novels.

Hermione's personality traits seem to go into overdrive in this book. It's like everything is magnified to extremes and brought out into sharp relief. And this is really fitting, because Hermione spends much of this novel sorting out who she is, which really complements Harry's own emotional journey this year too, as he sorts out his own past and the histories that intersect his own.

Hermione has an extreme course load this year; so extreme that she needs a time machine to attend all her classes (we'll get to that in a moment). So, for much of the book, Hermione is a nervous wreck:

She was usually last to leave the common room at night, first to arrive at the library the next morning; she had shadows like Lupin's under her eyes, and seemed constantly close to tears. (15.3.3)

Aside from freaking out, Hermione also ticks off everyone around her. Her personality can be a bit grating. She's smarter than everyone around her, unapologetically so, and she's also much more rational and savvy than her peers. Combine this with her tendency to follow all the rules, and you have the recipe for a social outcast.

Hermione might not mean to, but she's definitely annoying at times. She's like the kid that always throws off the grading curve, the one that gripes about getting 99 out of 100 when everyone else barely passed. So it makes sense that most of the images we get of Hermione in this book are of her alone and isolated. She's often actually walled in by her books, a physical representation of the stress and boundaries she's put on herself.

What's interesting, though, is how Hermione angers Ron and Harry. She does infuriate them when she responsibly goes to McGonagall about Harry's mysterious Firebolt and gets the thing confiscated. But the initial argument that sets them off is over Hermione's cat, Crookshanks. Crookshanks, who is about as smart as his master, goes after Scabbers, realizing before anyone else that the rat is trouble. Hermione was compassionate enough to adopt the rather ugly cat and is loyal enough to defend him, even to her BFFs. It's personality traits like this that come out to offset her overachiever tendencies and make Hermione a good person and friend. 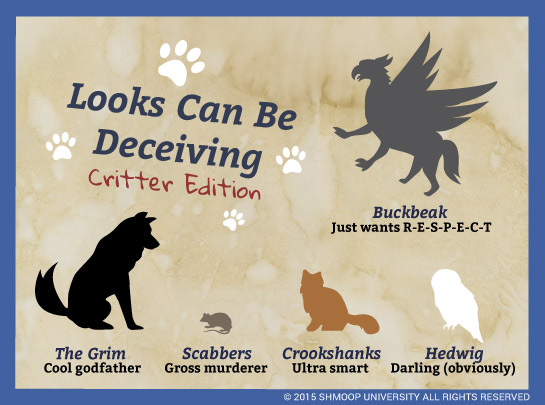 A huge part of this book is about dealing with fear. Harry has to face down fear personified in the Dementors. But Hermione spends the book on a parallel journey with Harry. What's she afraid of? We'll let her boggart explain.

"P-P-Professor McGonagall!" Hermione gasped, pointing into the trunk. "Sh- she said I'd failed everything!"

Hermione is terrified of failure. And it's this fear of failure that leads her to try so hard to keep her friends safe, even when it ticks them off, to take an insane course load, to help Hagrid with Buckbeak's tribunal, even when she barely has any time to spare. But we see some definite signs that Hermione starts to embrace her inner Gryffindor courage.

"She hasn't gone to get it?" Ron said, staring after her.

She had. Hermione returned a quarter of an hour later with the silvery cloak folded carefully under her robes.

"Hermione, I don't know what's gotten into you lately!" said Ron, astounded. "First you hit Malfoy, then you walk out on Professor Trelawney –"

Hermione is starting to hit the point where she doesn't care what others think and she's getting in touch with her reckless side. We doubt Hermione is going to go all teenage rebellion on everyone, but if her decision to lessen her course load for the next year is any indication, she isn't quite so overcome with the need to succeed by the end of the school year.

Finally, we have to take a look at Hermione's Time-Turner. Receiving it says a lot about Hermione's maturity, her brilliance, and the trust her teachers have in her. But this Time-Turner also connects Hermione to one of the book's major themes, and it places her in a role to be a true partner to Harry during their time travel adventure. Plus, we love the idea that Hermione fought to take on time itself during her crazy busy year. In the end, she had to learn, alongside Harry, that you can only fight time so much, and that it's better to just make the best with what you have.