Cho Chang in Harry Potter and the Order of the Phoenix 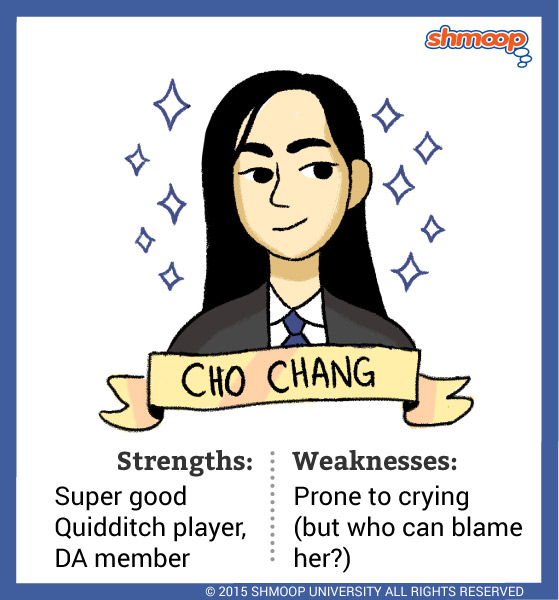 In Book 4, J.K. Rowling introduces us to Harry Potter's hormones. He gets a crush on Cho Chang, the fifth year Ravenclaw Seeker. He tries to invite her to the Yule Ball, but she refuses – unfortunately, she's already been invited by Cedric Diggory, the Hufflepuff Seeker and other Hogwarts Triwizard Champion. Of course, by the end of Book 4, Cedric Diggory has been killed. So, where does that leave Cho Chang?

The answer is, Cho is in a complicated place. Hermione sums up (for emotionally tone deaf Harry and Ron):

Well, obviously, she's feeling very sad, because of Cedric dying. Then I expect she's feeling confused because she liked Cedric and now she likes Harry, and she can't work out who she likes best. Then she'll be feeling guilty, thinking it's an insult to Cedric's memory to be kissing harry at all, and she'll be worrying about what everyone else might say about her if she starts going out with Harry. And she probably can't work out what her feelings towards Harry are, anyway, because he was the one who was with Cedric when Cedric died, so that's all very mixed up and painful. (21.186)

So, Cho likes Harry but feels guilty about it, because she also still likes now-deceased Cedric Diggory. She gives Harry his first real kiss, under the mistletoe just after a successful D.A. meeting. But then she bursts into tears. Harry finds the actual experience of being with Cho a little bit thrilling and a lot confusing (just like most relationships at fifteen).

Cho hints strongly that she wants Harry to invite her to Hogsmeade on Valentine's Day, which Harry gladly does. But Hermione also insists that she must meet Harry at noon at the Three Broomsticks so that they can do something important. At Madam Puddifoot's, a really chintzy teashop filled with kissing couples, Harry blunders by telling Cho right off that he's meeting Hermione after they have tea. Cho bursts into tears (as usual) and storms out of the teashop. While Harry is confused and rather angry to see her go, he doesn't pursue Cho or try to make up with her.

After all the build-up of his year-long crush, their brief kiss, and Cho's dozens of tears, their relationship has too much baggage to really get off the ground. Cho winds up dating Michael Corner by the end of the year, and Harry doesn't seem too heartbroken about it. After all, Harry has enough to do between Voldemort and Professor Umbridge; he scarcely has the emotional energy left over for girls – at least, for now.