Luna Lovegood in Harry Potter and the Deathly Hallows 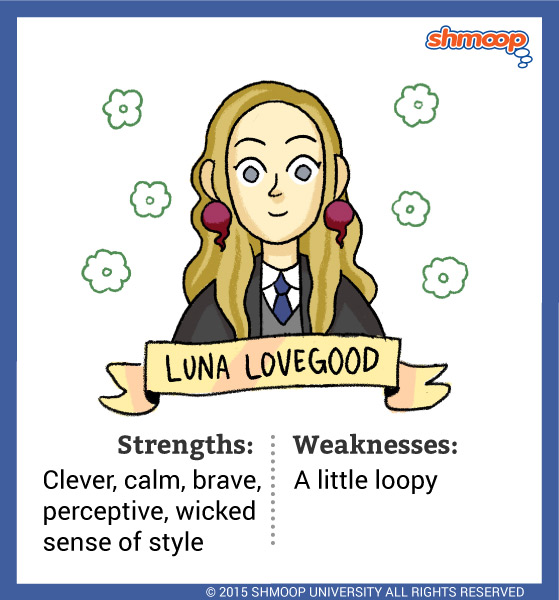 Luna is still marked by the same traits that have made her a lovable addition to the gang for the last several books – her quirky intelligence, her kindness, and her loyalty. This last trait is seen in the touching mural that Harry discovers in her room, depicting "Friends" – Harry, Ron, Hermione, Ginny, and Neville.

Luna's not quite as, well, loony as she used to be, but she's still a little off-kilter. And she sure doesn't let her oddness get in the way of her courage or her willingness to join in the fight against Voldemort. Luna shows her ability to stay calm and be useful in tight situations when she befriends the ailing Mr. Ollivander. And, in a move we really loved, at the very end of the book, she demonstrates a rather surprising maturity when she helps Harry sneak away for a moment to himself after the battle. She also shows an unusual amount of self-awareness in her manner of doing so – announcing to the room that there's a Blibbering Humdinger outside! Luna always does everything in her own unique style.