Minerva McGonagall in Harry Potter and the Sorcerer's Stone 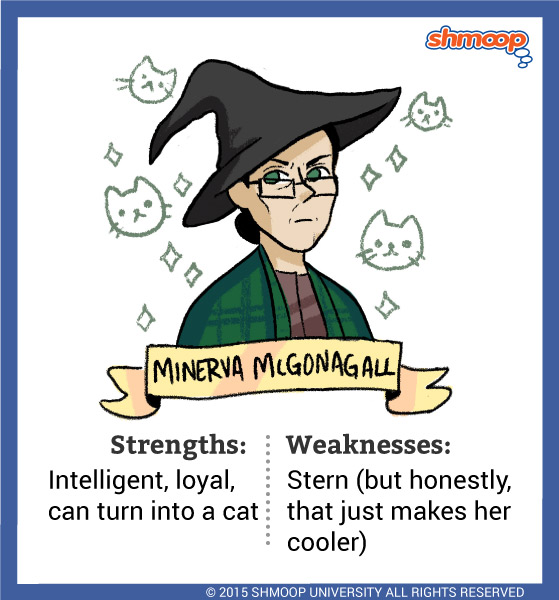 McGonagall welcomes students to Hogwarts both literally and figuratively – she writes the admission letters and also greets them when they enter to be Sorted. She is the Transfiguration instructor at Hogwarts and Head of the Gryffindor house. She's also Deputy Headmistress of Hogwarts. This puts her as second-in-command to Dumbledore. We're first introduced to her as a tabby cat, though, waiting outside the Dursleys' home for the arrival of baby Harry Potter. She cares deeply about Harry and his parents and seems, at least at the beginning of the book, slightly more softhearted than Dumbledore.

We don't see McGonagall transform herself into anything other than human for the remainder of the book, although she does do fun things like turn her desk into a pig. As a professor, she's extremely strict but fair. Though she works hard not to play favorites, she does show her pride in her house and bend the rules a little when she makes Harry the Gryffindor Seeker instead of punishing him for unlegislated flying. Yet she's tough on Harry and his friends when they go out of bounds at night. If anything, she's even tougher on Gryffindor students, because she wants them to achieve even higher standards.