Sherlock Holmes in The Hound of the Baskervilles 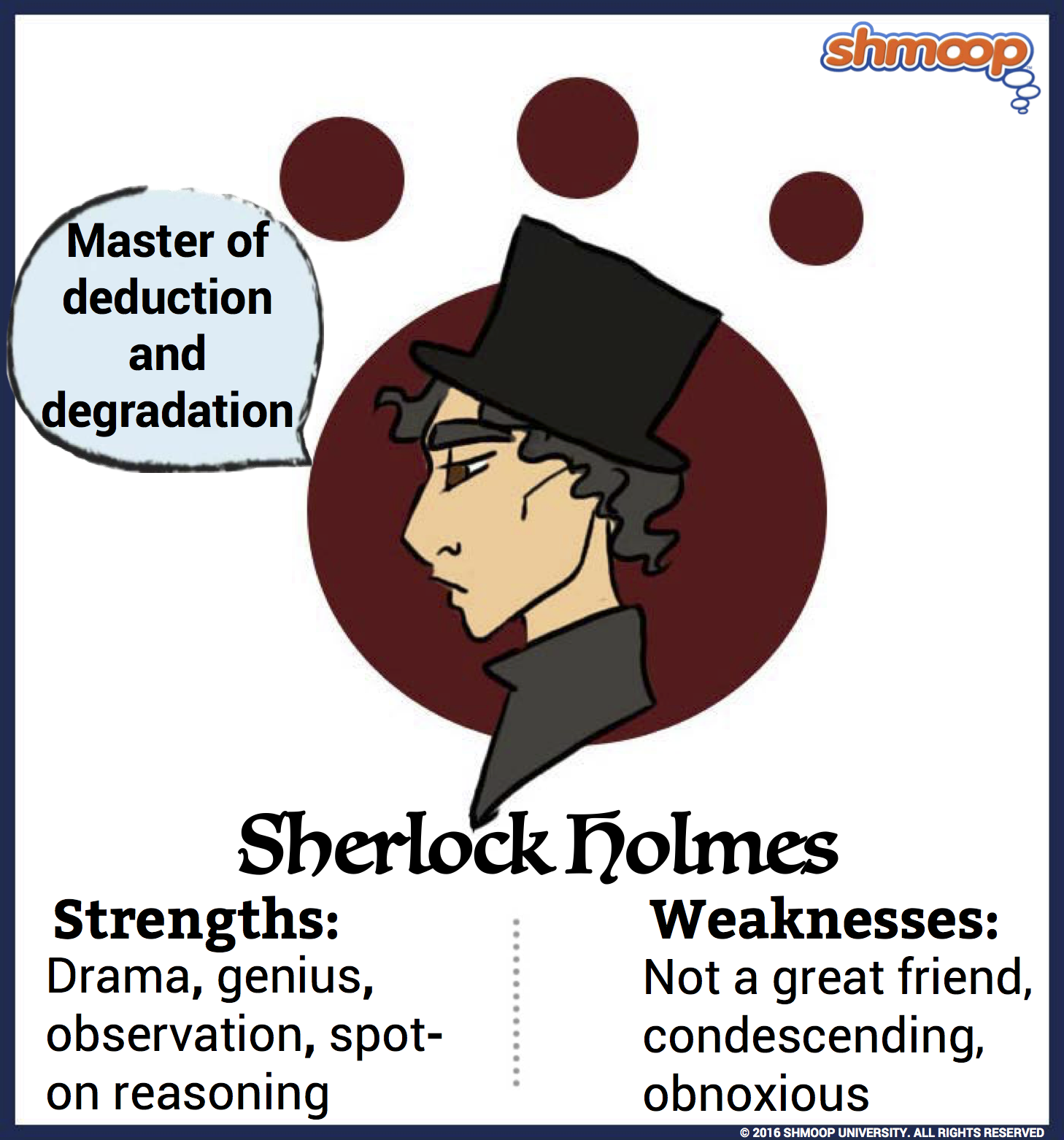 We have to give consulting detective Sherlock Holmes props for this much: he has a great sense of drama.

When the action of The Hound of the Baskervilles begins, Watson's inspecting a walking stick. We find out later that the walking stick belongs to Doctor Mortimer, but at the opening of the first chapter, we don't have any clue who that person might be. Watson goes on for quite a while with his guesses about this elderly, well-respected country doctor whom he believes must be the owner of the stick. And here's where Holmes' flair for the dramatic comes in: he lets Watson talk and talk and talk about all of his imaginative ideas. After Watson has said his piece, Holmes gives him the verbal equivalent of a sarcastic clap.

Holmes allows Watson credit for being a "conductor of light," though he's not "luminous" himself (1.13). In other words, Watson may be dense, but his slow thought processes at least help to bring Holmes to a better understanding. Holmes then gives Watson the correct deductions: Doctor Mortimer is a young country doctor who received the stick from Charing Cross Hospital (not Hunt, like Watson guesses). He also has a small dog.

The whole point of the exchange is so that Holmes can show how brilliant his reasoning is in comparison to Watson's more amateurish guess-work. So we get two things from this introductory scene: first, Holmes actually is a genius who can paint a full picture of someone just by reasoning from the details of ordinary objects that he owns. His powers of observation and attention to the smallest details are the hallmark of all the Sherlock Holmes stories. And second, he's kind of a jerk. A know-it-all who doesn't let even his best (and maybe only) friend forget it. He probably makes Watson pay more than half the cable bill.

Oh, Holmes is magnificent anyway, with his cleverness, his courage, and his sense of style. (Full disclosure: we have kind of a literary crush here. We can't help it: we've always liked smart guys.) But he is also extremely difficult to have as a friend.

Consider: when poor Watson is working his tail off at Baskerville Hall, Holmes is there, out on the moors. The whole time. And he never lets Watson know that he's staying nearby and providing a second set of eyes on all of the events surrounding Sir Henry. While Watson forgives Holmes for not telling him of Holmes' secret travels, we still find it insulting to Watson that Holmes decides to keep his best friend in the dark about his plans.

We actually don't see Holmes' absolute worst habits in The Hound of the Baskervilles. His cocaine use comes out much more in Conan Doyle's earlier works such as The Sign of Four (1890) or the short story "A Scandal in Bohemia" (1891). (For more on Holmes' earlier characterization, check out our "Character Analysis" of Holmes from Shmoop's learning guide for the short story collection The Adventures of Sherlock Holmes.) And his decision to fake his own death and leave Watson to mourn him for three years only emerges in the short story "The Adventure of the Empty House" (1905).

But we see quite enough of Holmes in The Hound of the Baskervilles to realize that he's (to put it kindly) challenging to have around. So how does Conan Doyle make us—and Watson—keep liking Holmes? We think that he stays appealing because he has more than one side to his personality. He is arrogant and bad with people, yes. But he also takes genuine pleasure in going to an art gallery or heading to the opera with Watson. He loves spending time with his best buddy, which makes him seem a lot warmer and fuzzier than, say, Edgar Allan Poe's fictional detective C. Auguste Dupin, who provided Conan Doyle with one model for the character of Sherlock Holmes.

And even though Holmes can be a complete control freak, we let that go that because we trust him. In this story, he orders people around and tells them not to make a move until he says so and to do exactly what he says, no questions asked. And they mostly agree. He's the kind of guy you'd want on your side if someone or something is trying to kill you. We can't hate him for thinking he's always right. He usually is.

Why We Always Want Holmes to Be Right

The Hound of the Baskervilles is unusual among Holmes stories because Holmes himself doesn't appear in it much. Since our favorite consulting detective spends about half the novel hiding out secretly on the moors near Baskerville Hall, we get many more insights into Watson and his concerns than we do into Holmes. Even so, the novel does have a couple of Holmes' emotional moments that really set it apart from many of the other Holmes stories.

When Holmes sees the body of Selden the murderer at the bottom of a cliff on the moors and mistakes it for Sir Henry's, he tells Watson:

I am more to blame than you, Watson. In order to have my case well rounded and complete, I have thrown away the life of my client. It is the greatest blow which has befallen me in my career. But how could I know—how could I know—that he would risk his life alone upon the moor in the face of all my warnings? (12.82)

The Holmes stories generally emphasize Holmes' superhuman powers of reason. Self-doubt is not one of his personality traits. So to see him admit here that there is something he could not know is pretty surprising. It makes him seem much more human and relatable than he often appears. This scene also shows us how seriously he takes his professional and personal responsibilities. He's not just in this biz to show off his fabulous brain.

The Hound of the Baskervilles may not give us as much Holmes as we might want (can there ever be enough?), but it does show us a glimpse of his emotional side. Later on in the novel, when he worries that the rising fog will keep them from being able to save Sir Henry from Stapleton, we're reminded once again that Holmes may be incredibly gifted, but he's as subject to chance and fate as the rest of us. It's reassuring to find out that he knows he has limitations.

We've already mentioned that Holmes can seem confident to the point of obnoxiousness. But he can appreciate in others what he most values in himself—cleverness and logic. When someone demonstrates a special scientific or logical skill (like Mortimer's phrenological pursuits), he recognizes a like-minded person. When he's outsmarted by a disguised Stapleton in London, he's more amused and appreciative than anything else by his "worthy" foe. This kind of stuff grabs his attention.