The Hound of the Baskervilles Guilt and Blame 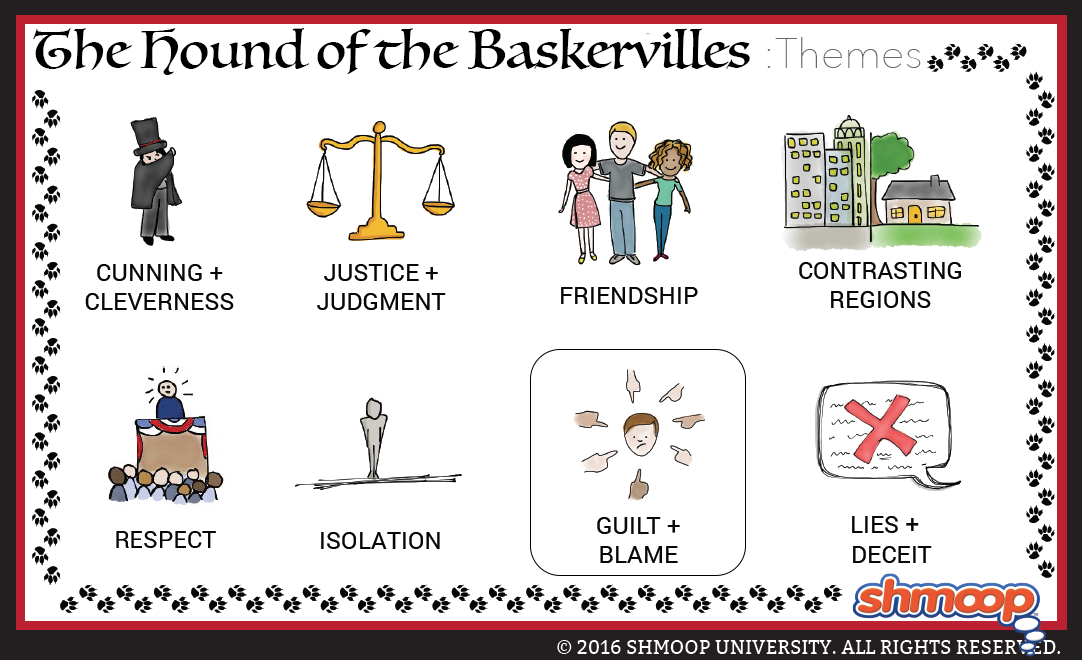 Wait—do you mean guilt as in guilty conscience, or guilt as in, "He's the one who ate your Swedish Fish!" Let's look at both. You can be guilty but not feel guilty. And vice versa.

Most people have the ability to feel guilty. But even though Stapleton is a killer, we get no indication at all that he feels any kind of guilt for murdering Sir Charles or for working so hard to kill Sir Henry. He's surprisingly guilt-free even though he is clearly the one to blame for most of the awful things that happen in The Hound of the Baskervilles. Maybe it's not so surprising—lack of guilt or a conscience is a hallmark of what's called sociopathy (as in sociopathic killer). Stapleton fills the bill.

Holmes, on the other hand, feels terrible guilt thinking he's allowed Sir Henry to die out on the moors (before he realizes that, in fact, it was Selden the convict who was the corpse). Holmes has a strong sense of personal responsibility because he operates by an individual moral code, which means that, like most of the rest of us, he has to suffer when he feels like he's done something wrong.

Questions About Guilt and Blame

The Barrymores clearly feel guilt over sheltering Selden in secret, without telling Sir Henry, which is why Sir Henry decides not to fire Barrymore as his butler. The Hound of the Baskervilles thus implies that guilt itself is enough punishment for wrongdoing in some cases.

The fact that Beryl and Laura Lyons escape legal punishment for their assistance in Stapleton's schemes suggests that The Hound of the Baskervilles regards wrongdoing that's a result of abuse or manipulation to be forgivable and justifiable.