Doctor John Watson in The Hound of the Baskervilles 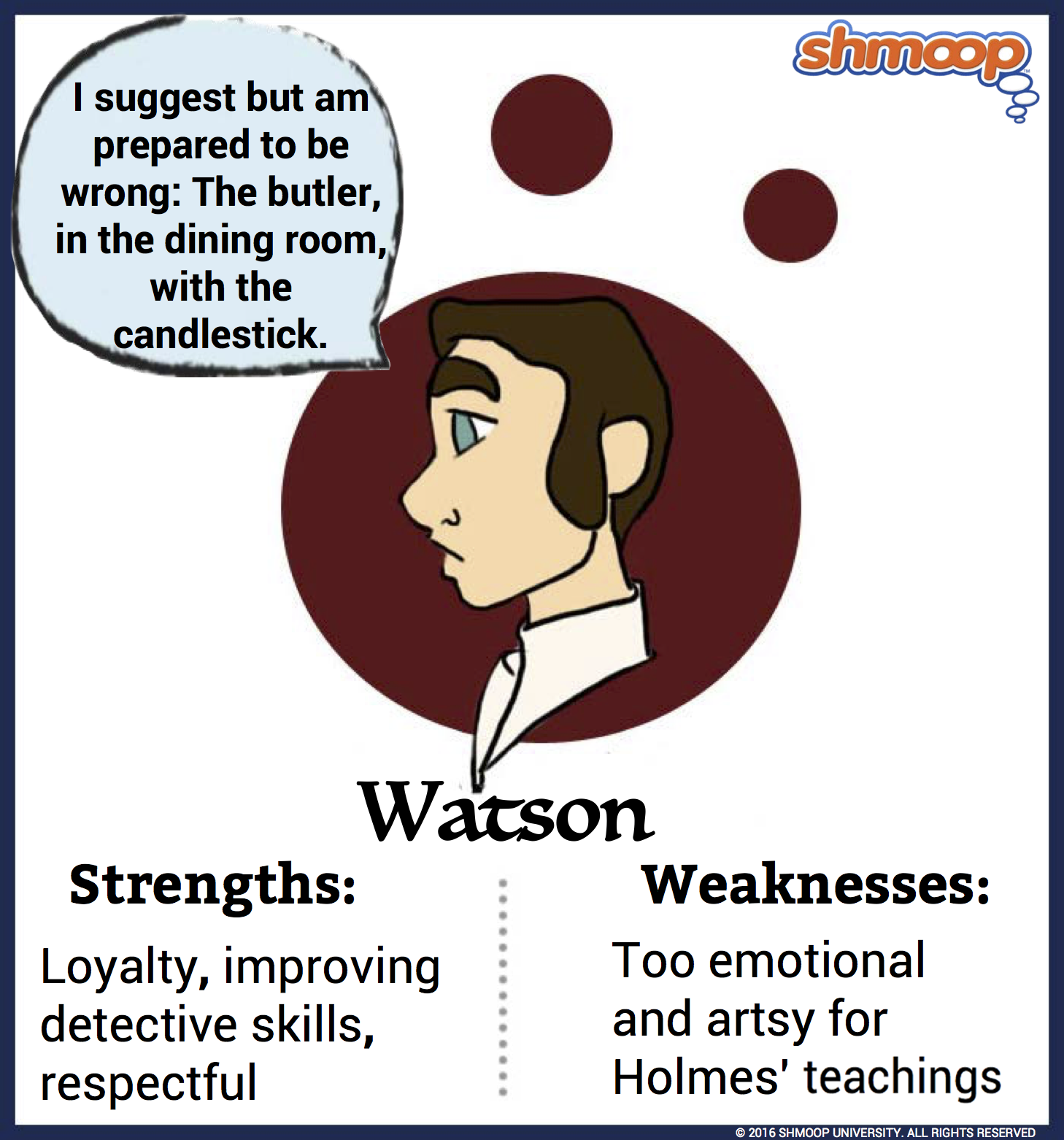 In earlier Holmes novels like A Study in Scarlet, Watson really fades into the background. We know that he is a combat vet and a medical doctor, sure. But as the narrator of Holmes' adventures, all his attention is on Holmes; Watson rarely turns that focus onto himself. Still, what we do know of Watson makes him seem extremely steady, reliable, and loyal. Holmes tells Sir Henry that, "there is no man who is better worth having at your side when you are in a tight place [than Watson]" (5.79). And we certainly believe him—after all, Holmes ought to know.

We don't want to give the impression that Watson is some kind of shallow suck-up who attaches himself to Holmes just because Holmes is this famous genius. Watson appears genuinely interested in Holmes' methods of deduction, and he tries to apply Holmes' methods to his own investigations in Baskerville Hall. When Sir Henry and Watson discuss what to do about Barrymore's mysterious late-night candle-waving, Watson speculates that Holmes "would follow Barrymore and see what he did" (9.8). Even without Holmes there, Watson's absent friend clearly influences him. He's been paying attention.

In fact, Watson gets in on some of the detecting action in The Hound of the Baskervilles. He's left on his own to investigate at Baskerville Hall for a full six chapters—almost half the book. And Watson puts this time to good use: not only does he track down Laura Lyons around the same time that Holmes does (as Holmes says, their "researches have evidently been running on parallel lines" [12.22]), but Watson also tracks Holmes to his hut out on the moors.

Watson may not expect to find that the mysterious gentleman living out on the moors is his own friend Holmes, but he does manage to surprise Holmes in his own campsite. Watson's skills with investigation earn a rare "Well done!" (12.22) from Holmes, and they also gain our respect as well. Watson is not just a narrator and an assistant to Holmes; he is developing as a detective in his own right.

Still, while Watson may be improving his abilities at observation, he's not quite picking out his deerstalker hat yet. Watson depends on Holmes' affirmations to make him feel good about his growing skills. Watson still acknowledges Holmes as his mentor as well as his dear friend.

So when Holmes gives Watson that backhanded compliment near the start of the novel, Watson admits that he was "proud, too, to think that [Watson] had so far mastered [Holmes'] system as to apply it in a way which earned his approval" (2.14). And later on in the book, when Watson is angry at Holmes for hiding his presence on the moors from his best friend, Watson forgives Holmes for the deception because, "the warmth of Holmes' praise drove [his] anger from [his] mind" (12.32).

Clearly, Watson is a big ol' softie when it comes to Holmes, and a few nice words from him can immediately turn Watson into jelly. To say that Watson admires Holmes, or that they are just BFFs, is kind of oversimplifying things: Watson enjoys spending time with Holmes, he respects his friend's abilities, he wants to learn some of those abilities for himself, and he desires Holmes' approval. Watson's emotional ties to his best friend are deep and complex. This relationship between these two guys provides the emotional core of the Holmes stories, lightening them up a little and giving them some consistency and interest beyond the suspense of the puzzles themselves.

At the beginning of Chapter 5, while Holmes and Watson are still in London, they take a break in their frantic investigating schedule to go to an art gallery and take in the works of some "modern Belgian masters" (5.1). Watson comments that Holmes is very good at concentrating on whatever is in front of him at the time, without getting distracted. But while Holmes' powers of concentration may be amazing, Watson doesn't think much of Holmes' aesthetic sense: "[Holmes] would talk of nothing but art, of which he had the crudest ideas" (5.1). Why does Watson think that Holmes' art appreciation skills are so "crude"?

Well, let's take a quick look at a later scene in the novel, when Holmes is staring at the Baskerville portraits in the dining room of Baskerville Hall. Holmes admits that, "Watson won't allow that I know anything of art, but that is mere jealousy, because our views upon the subject differ" (13.39). Holmes can identify the artist who painted each of the portraits, but he also has a great eye for their faces. He spots the resemblance between Stapleton and the portrait of Hugo Baskerville right away. Holmes seems to view art as evidence, and he evaluates it based on its accuracy and closeness to reality. Our guess? He skipped the Picasso exhibit at the National Gallery.

In our analysis of Watson's character in The Adventures of Sherlock Holmes learning guide, we note that Holmes does not care for Watson's writing about his cases because Watson is too romantic and emotional. Holmes wants his cases to come across as strictly rational learning guides—a set of how-tos about bringing down criminals the Sherlock Holmes way. Holmes appears to view writing and, in this novel, painting, only as a vehicle for demonstrating the workings of real life.

This novel's debate between Watson and Holmes about how to evaluate art—as an aesthetic object or as proof of objective reality—speaks to a serious difference in the way the two of them view the world. Holmes knows how to use art and how to evaluate its context and origins. But Watson, the more emotional of the two, wants to appreciate the beauty of what he's looking at.

Watson's way of viewing pictures may lead him not to notice Stapleton's face peering out at him from under Hugo Baskerville's giant hair and floppy hat. But his artistic sensibility makes him a much better storyteller, as he describes the gloomy beauty of the moors around Baskerville Hall or the ominous moan of the Hound of the Baskervilles. Watson's artistic perspective gives The Hound of the Baskervilles its flavor, which is one of the things that makes the book so much fun to read. Check this out:

To his eyes all seemed beautiful, but to me a tinge of melancholy lay upon the countryside, which bore so clearly the mark of the waning year. Yellow leaves carpeted the lanes and fluttered down upon us as we passed.

It's enough to make us swoon.