The Gods in The Iliad 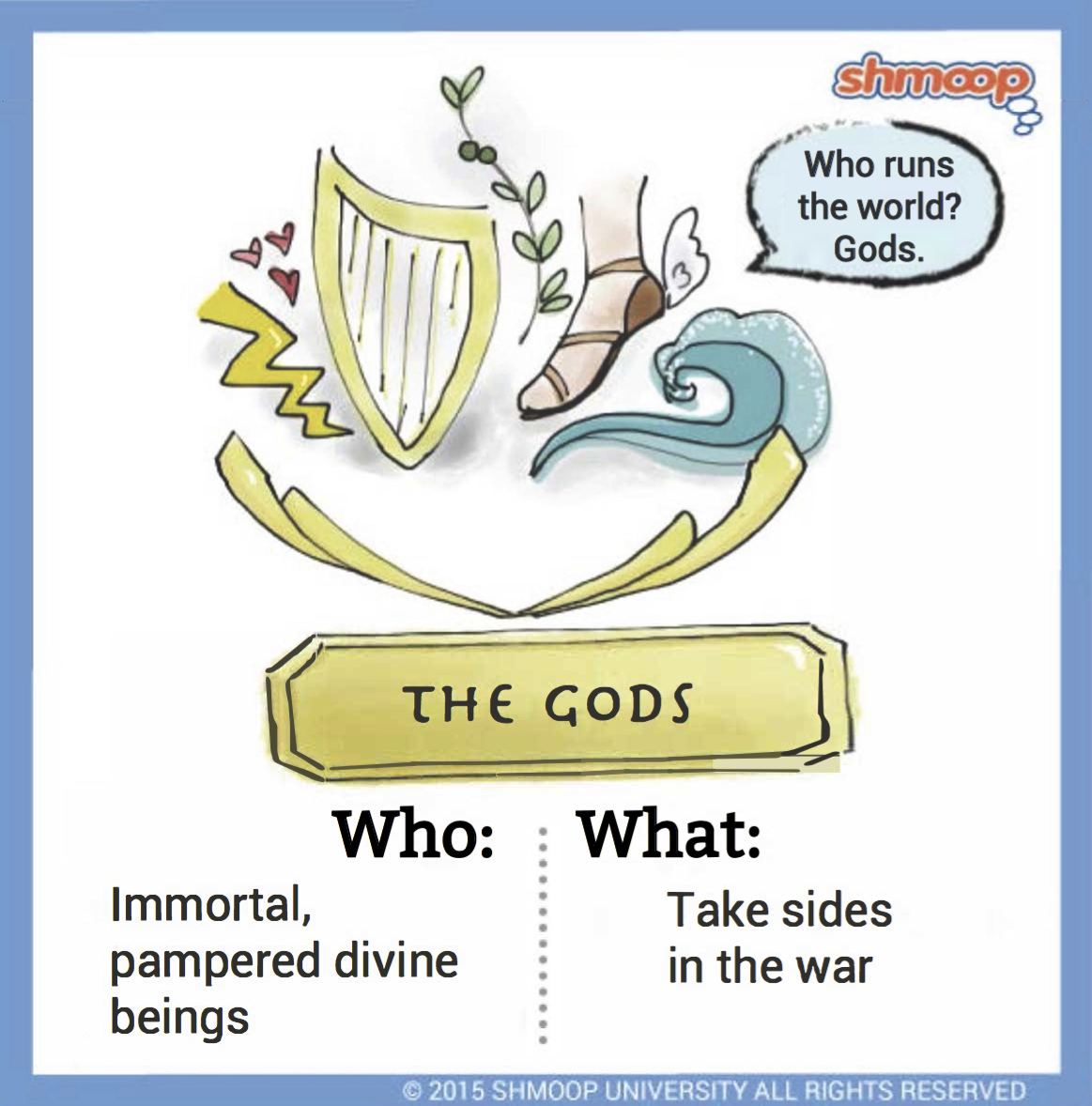 Usually when you think of "gods" you think of divine order, justice, and harmony. Maybe you think of fluffy clouds and harp music and white suits. What you probably don't think of—and what the Iliad delivers in spades—is catty middle school-esque infighting and snarky chaos. Oh: and bloodlust. So. Much. Bloodlust.

To a certain extent, the role of the gods in Homer's Iliad can be summed up by the following remark by a character in an entirely different literary work, Gloucester from Shakespeare's King Lear: "As flies to wanton boys are we to the gods; / they kill us for their sport."

This is only true to a certain extent because Homer's gods also experience deep connections with some mortals (think of Aphrodite looking out for Paris or Athene's special friendship with Odysseus), particularly when these mortals are their children (think of Aphrodite looking out for her son Aineias, Zeus pondering rescuing his son Sarpedon from death, or the profoundly human grief of Thetis for her short-lived son Achilleus).

And yet, there remains something essentially trivial about the gods' way of life, as is made most vividly clear in the feasting scene that rounds off Book 1, in striking contrast to the vehement human struggle that has just erupted between Achilleus and Agamemnon.

Psst. I'll Help You Win if You Roast Me a Goat.

In reading about Homer's gods, a few basic facts should be kept in mind. First of all, they are immortal. As such, their veins are not full of blood, but rather a divine substance called ichor. Also, they don't eat ordinary food, subsisting instead on ambrosia (this word in Greek means simply "immortal [stuff]"), and imbibing nectar, an immortal drink. They also "eat" (not quite the right word, but it's hard to come up with a better one) the smoke from sacrifices of burned animal fat, which the mortals offer up to the gods at their feasts, and "drink" the wine spilled on the ground. In exchange for these offerings, as well as other acts of worship, such as prayers or the construction of temples, the gods perform a variety of services for mortals (such as giving them victory in battle or athletic contests, etc.).

The second thing to remember about the Homeric gods is their specific allegiances in the Trojan War. Hera, the patron goddess of women and the home, and Athene, goddess or war and wisdom, are opposed to the Trojans because Paris said that Aphrodite was more beautiful than them. Poseidon, the god of the sea, is also against the Trojans, but for a different reason. He's mad because Laomedon, an ancient king of Troy (and the father of Priam, its current king) once enslaved him and made him build the city's walls—and then refused to pay him.

Even though Apollo, god of poetry, archery, healing, and a whole lot of other stuff, was also enslaved at that time, and also cheated out of his pay, he is backing the Trojans. So is Aphrodite, the goddess of love, whose heart is still going pitter-patter because of Paris's original flattery. Ares, the god of war, is also on the Trojan side.

Those who remain more neutral are Zeus, the king of the gods, who controls the sky and the weather, Hephaistos, the god of fire and metal-working, and Hades, the god of the underworld. These gods can swing one way or the other on specific occasions as a favor—like when Thetis convinces Zeus to help the Trojans, or when the same goddess gets Hephaistos to make a snazzy new suit of armor for her son Achilleus.

The final thing to remember about the gods is that, even though, in principle, they are not bound by fate (as can be seen when Zeus considers saving Sarpedon, even though it is against his destiny), they usually follow it anyway, just to keep things in order.