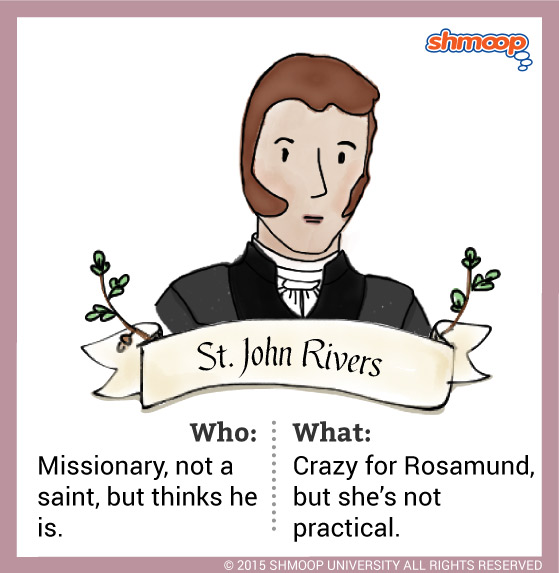 The first thing to explain about St. John Rivers is how to pronounce his first name, "St. John." It’s not "Saint John," although of course that’s what it means; it’s pronounced "SIN-jun." Don’t ask us why this is; the English have this adorable accent.

He’s not actually a saint, either—it’s just a weird first name—although he does think that he’s one of the elect. (Also, while we’re talking about names, it might be worth thinking about Jane’s two different cousins named John: John Reed and St. John Rivers.)

St. John may not have been officially canonized as a saint yet, but he’s pretty convinced that he’s close to it. After all, he’s done some serious mortifying of the flesh in order to sacrifice all his desires and become a missionary in India. Mostly, this makes sense; he just isn’t happy living calm, normal, domestic life. He has that drive that some people get to go out and prove themselves against strange challenges and unbearable odds.

But there is one thing he hasn’t been able to stop himself from wanting: Miss Rosamond Oliver, the local, wealthy beauty. She loves him, he loves her, her dad is okay with it—it should work out. And St. John basically turns into Jell-O every time he sees her. He thinks, though, that she’d be a bad missionary wife, and so he refuses to let himself act on his feelings for her. Giving up the missionary-in-India project just isn’t possible:

"It is strange," pursued he, "that while I love Rosamond Oliver so wildly—with all the intensity, indeed, of a first passion, the object of which is exquisitely beautiful, graceful, fascinating—I experience at the same time a calm, unwarped consciousness that she would not make me a good wife; that she is not the partner suited to me; that I should discover this within a year after marriage; and that to twelve months’ rapture would succeed a lifetime of regret. This I know." (3.6.45)

Ugh. Someone should tell this guy that love conquers all.

Apart from this one passion, St. John is "hard and cold," he’s "frozen over," he’s "cold as an iceberg." He may be handsome, blonde, and blue-eyed, but he might as well be "no longer flesh, but marble"—like some kind of Greek statue of Apollo. When he proposes to Jane, whom he thinks would make a great missionary wife, she’s appalled by the idea that he would marry someone he doesn’t love. She also knows that he’d even force himself to have sex with her, because that’s what husbands and wives do, despite not having any warm feelings for her. Jane finds the whole thing disgusting, and so do we.

The strange thing about St. John is that he might at first seem like an obsessive-compulsive, cold-blooded freak, but actually he is what Jane’s been trying to become: someone who makes relationship decisions based only on logic and practicality. Once Jane realizes that he’s the natural end-point of that philosophy, she goes running back to her true love, Rochester, as fast as she can—Bertha or no Bertha.

Remember, Jane Eyre ends with St. John Rivers; he’s the last character we think about, alone out there in India, missionary-ing and stuff. There tends to be a lot of emphasis on endings in literature, so that’s probably important. (See "What’s Up With the Ending?" for details.)